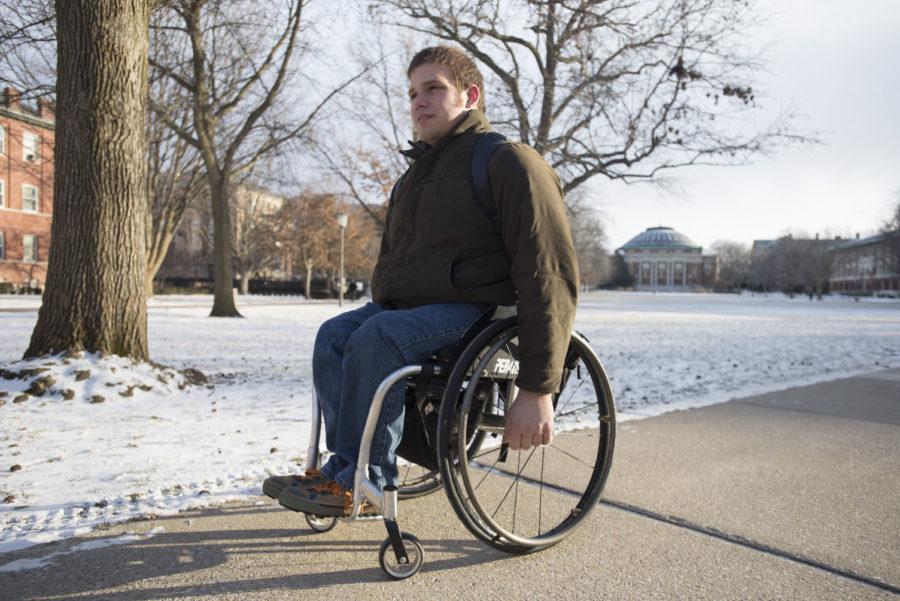 Tim Nagel, junior in AHS, is one of many students in wheelchairs who struggle with bad weather.

While some students may be complaining about the winter weather, students like Tim Nagel may face even more challenges while traveling around campus.

Nagel, junior in AHS, who uses a wheelchair to get around, said there were times during the winter he would skip class because the snow would pile up.

“A lot of times when they clear the roads, they push the snow up against the sidewalk, and so it blocks each end of the sidewalk. So, if I try to cross the street, snow gets piled up on both sides,” he said.

Nagel came to the University three years ago from Texas because of the seven universities that offer wheelchair basketball, he thought the University was the best academically.

He currently plays on the men’s wheelchair basketball team as a shooting guard.

Meridith Bradford, junior in AHS, serves as one of the team managers for the men’s and women’s Wheelchair Basketball teams and has not let the necessity of using a powered wheelchair stop her from working toward her degree.

Bradford has cerebral palsy and said the University is one of the few colleges in America that provides full service for students with disabilities, in terms of providing daily living assistance for students.

Students with disabilities at the University have the opportunity to receive assistance from the Division of Disability Resources and Educational Services. Among the services DRES offers is bus transportation to qualifying students. The buses will come to pick the students up at their residency and take them to classes, medical appointments, University sponsored events and pre-approved off-campus events.

Bradford said many of her classes this year are close to where she lives, so she rarely uses the DRES buses. Typically it is easier to travel with her wheelchair because students have to schedule times to use the buses, she said.

The Champaign-Urbana Mass Transit District has wheelchair-accessible buses, but Bradford said those tend to be more crowded in the winter. Even when they are not crowded, she said the space is designed for smaller wheelchairs, and it is hard to turn the wheelchair into the designated spot.

Bradford said traveling is difficult with the wind and cold because her muscles tend to get tight. She also has difficultly putting gloves on her hands, which makes it harder to maneuver a power chair in cold temperatures.

The number of crosswalks on campus with audio capabilities is helpful because she can hear better than she can see. Bradford added there are many accommodations the University provides to students with disabilities, such as allowing her to open certain doors and elevators with her I-card.

She believes the University goes above and beyond the standards of the Americans with Disabilities Act of 1990, and she added there are many places in the “real world” that do not have the same opportunities for access and transportation for people with disabilities.

“There’s so many little things that I can do here that I can’t do outside of this campus,” Bradford said. “The rest of the world needs to catch up to the University.”

According to the College of Applied Health Sciences’ website, DRES was founded by Timothy Nugent in 1948, and the system was “the first post secondary-disability support service program in the world.” In 2014, DRES served more than 1,500 students with disabilities and the graduation rate for registered DRES students is 91 percent.

Mylinda Granger, access and transportation coordinator for DRES, said the organization will soon be acquiring four new buses to replace old ones. These buses will have ramps rather than lifts, which will allow faster travel times because several students will be able to get on and off the buses quickly, Granger said.

The University became the first post-secondary institution to have curb cuts and wheelchair-accessible buses with fixed routes. It was also the first college to have wheelchair sports, according to the College of Applied Health Sciences’ website.

Nagel said he does not often use the DRES buses, but knows many people who do use the services because of the convenience.

He said the DRES system gives students many opportunities, such as transportation, testing accommodations and help setting up study abroad programs, which Nagel is looking into for this summer.

Although students with disabilities may face different challenges, Nagel said some people may not understand how much ability people who use wheelchairs have.

Ali can be reached at [email protected].