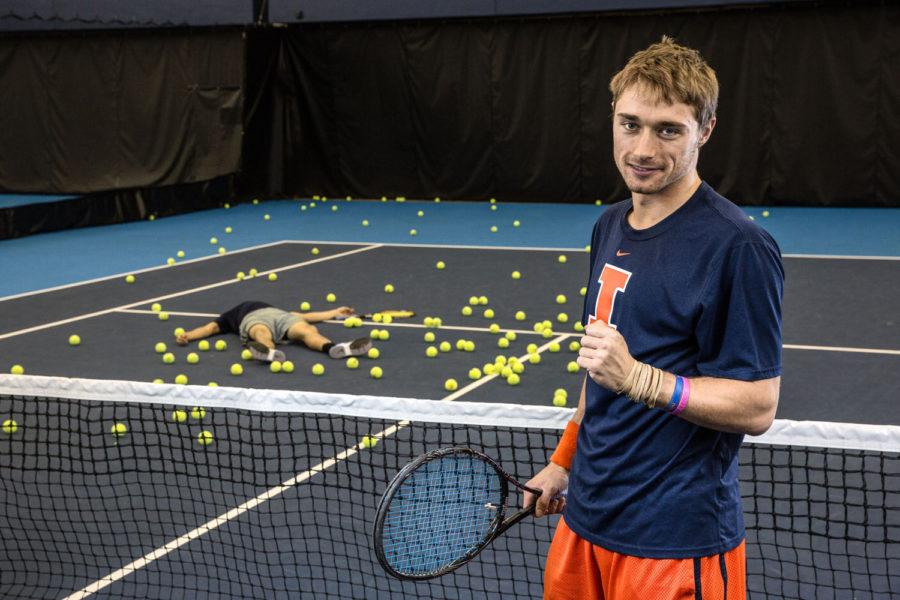 There’s a lot of noise in college tennis.

Fans get rowdy between points, coaches yell out encouragement on the court and players take advantage of opportunities to celebrate. During an Illinois men’s tennis match at the Atkins Tennis Center there’s a lot of noise, but little of it comes from one of the team’s best players.

Senior Tim Kopinski keeps a cool head on the court, but behind that calm demeanor lays a high motor and a fiery passion. An in-match professionalism has led him to a 10-1 start to the season, added to by a dominating performance this weekend against Northwestern, Toledo and Indiana.

“He’s done an incredible job to use his mind in a positive manner and to become way more professional in how he manages himself and manages his mind on the tennis court,” head coach Brad Dancer said. “(He) can tolerate physical pain, he is constantly striving to get better and his expectations of himself are through the roof. … The ultimate result is a competitor that loves the sport, that wants to be out there and wants to be in the moment.”

Kopinski went 3-0 this weekend in singles — every victory came in straight sets. He was the only Illini to pick up three singles wins on the weekend, taking down Northwestern’s top-ranked player, then-No. 64 Strong Kircheimer 6-1, 6-3, smoking Toledo’s Mark Signil 6-1, 6-0 and defeating Raheel Manji of Indiana 6-4, 6-2. Kopinski currently stands at No. 33 in the national rankings. Earlier this year, Dancer said Kopinski has become a player who opponents don’t want to face. Kopinski said he thinks he knows why.

“I’m pretty physically strong, and I combine that with being really focused the whole match and I can make matches really physical and painful,” Kopinski said. “For opponents, it’s not fun playing against me because I play long points and very physical points.”

Kopinski has brought that physicality together with improved focus on the court. Dancer talks a lot about playing matches with purpose and that mental aspect of the game is one of the things that Kopinski has strengthened the most in his time with the Illini. Still, it’s something that both he and Dancer know Kopinski can continue to improve.

When he was a freshman, Kopinski said that he could hit “some nice shots,” but couldn’t play consistently over the course of a match. Dancer said he worked with Kopinski to find the balance between playing explosively and playing mindfully. With the focus he has improved over the years, Kopinski now remains calm and takes advantage of his physicality in matches. His improved mental strength has made his physical strength all the more dangerous.

Above all, Dancer said many of Kopinski’s strengths as a tennis player come from his parents, Jan and Zofia Kopinski. Dancer thinks Kopinski has inherited their passion.

“They’re such amazing people in terms of work ethic. They have instilled in him toughness, a passion, a grit.” Dancer said. “He has a high-running motor, that’s probably genetic. … He’s going, he’s going all the time.”

In addition to strong singles play early this season, Kopinski is also a part of one of the country’s top doubles teams. Kopinski and his partner, senior Ross Guignon, ended the fall season as runner-ups at the ITA National Indoor Intercollegiate Championships. This weekend, the pair picked up two wins in the two matches they played against Northwestern and Indiana.

Kopinski said he’s able to take some strong elements of his doubles game, like returning serves and hitting volleys, and translate them into his singles game. Kopinski emphasized that the confidence he has gained from spending time on the doubles court has made him a better singles player.

As an important player in both doubles and singles, Kopinski can contribute in multiple ways to the team’s ultimate goal: a national championship. As a senior, the chase for postseason glory is even more important to Kopinski.

“It would mean the world to us, especially our senior class; we didn’t come in as huge recruits,” Kopinski said. “I feel like we’d be selling ourselves short if we didn’t reach for that (national championship).”

The Illini are currently ranked No. 3 in the nation and should be in the mix as one of the country’s top teams all year. When crucial post-season matches come around, Kopinski’s on-court composure will be important.

Even more important will be the fierce competitiveness beneath Kopinski’s cool facade.