Illinois baseball has found ways to survive late in games 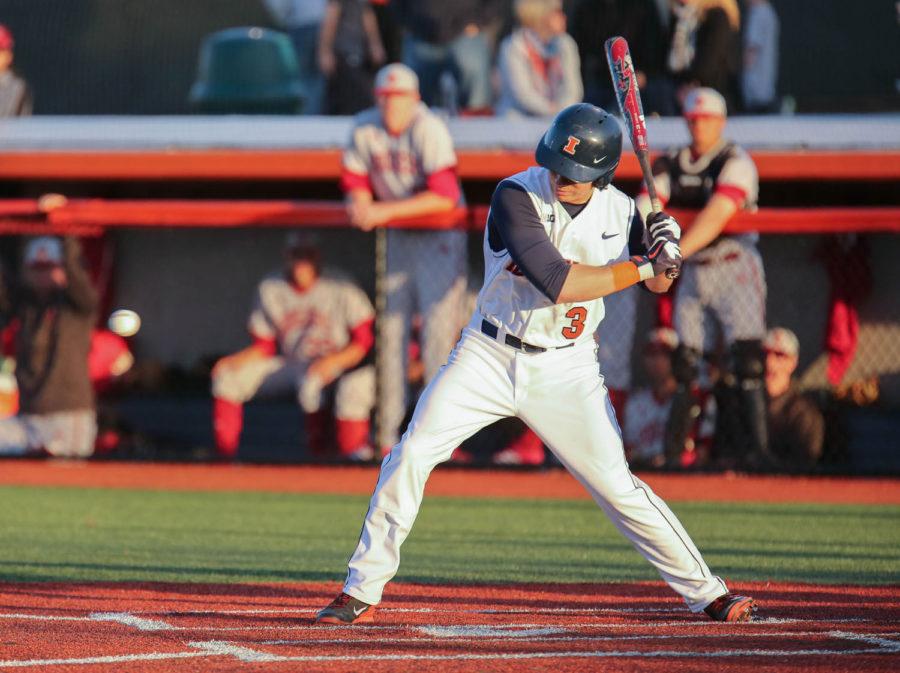 Illinois' Casey Fletcher (3) up at bat during the game against Indiana at Illinois Field on Friday, April 25, 2014. The Illini lost 9-3

With the game tied and the bases loaded, Casey Fletcher stepped up to the plate in the bottom of the ninth inning.

The Illinois baseball team had given up three runs in the top half of the frame and had allowed Fordham to tie the game at six. After a strikeout, hit-by-pitch, double and intentional walk, it was the senior’s turn to deliver at Swanson Stadium in Fort Myers, Fla., on Saturday afternoon.

The ball rolled to the backstop and Fordham’s catcher sprinted after it. The umpire wasn’t sure what had just happened. The senior lobbied with the umpire that the ball had hit his foot until he saw Illini catcher Jason Goldstein running home. A crowd of orange jerseys streamed out of the dugout to celebrate, the Illini had won the game 7-6.

After looking at film of the pitch, it was determined the pitch had hit Fletcher, but by then, it was simply a statistical correction. The “cardiac kids,” as pitching coach Drew Dickinson likes to call the group, had survived yet another close, late-inning game. Although the Illini blew a 6-3 lead, they fought back and showed resiliency.

“A lot of teams will fall asleep at the end (of games),” senior center fielder Will Krug said. “It displays to us our veteran mindset. We’ve been there before and we’re not worried when we’re down late — we know we have the ability and talent to come back, no matter the situation.”

Illinois has been no stranger to late-game heroics through two weeks of play. In four of the team’s seven games, it has had to make a late-inning push to win or tie the game. The Illini staged late-game comebacks in the final three innings in two games against New Mexico State during the season-opening weekend, and once each against Fordham and Florida Golf Coast this past weekend.

Illinois couldn’t finish with a win in Sunday’s game with Florida Golf Coast due to a travel curfew. Because the Illini had to get to the airport in time for their trip back to Champaign, the game was called a tie after nine innings.

Although head coach Dan Hartleb said that a tie is ultimately the same as a loss — Illinois failed to win the game — he was still proud of the way his team fought back, even when everything looked bleak.

“After we lost the lead, and we have one out on a bad play in the last inning, we still found a way to come back,” Hartleb said. “The resiliency of the team and the fact that we continue to compete, regardless of the situation, that’s really good.”

Much of the late-game heroics have been a result of the team’s balance and depth. Heading into the season, Hartleb’s players echoed his belief that batters can’t rely on the pitching staff and that pitchers can’t rely on the offense. There have already been moments when Illinois has shown off its offensive power and its talented arms, but the veteran team’s goal is to be as balanced as possible so that when late-game magic is needed at crucial parts of the season, one side brings in the win.

Although Fletcher loves to be the hero, he knows that even if he’s not at the plate to win the game, he can look forward to jumping out of the dugout to celebrate with whoever saves the day.

“We find a way to get it done late in the games. It says a lot about our character and about the kids that we have on this team,” Fletcher said. “They’re fierce competitors, and we don’t quit until the 27th out.”