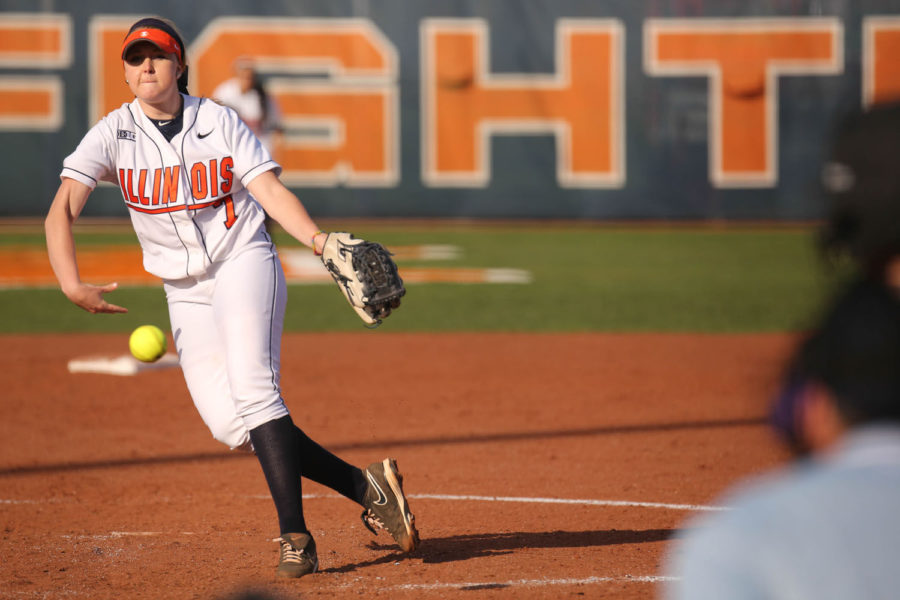 Illinois’ Jade Vecvanags pitches during the game against Northwestern on April 22, 2014. Vecvanags’ best outing of the season was cut short due to a travel curfew.

Head coach Terri Sullivan always talks about how important it is that her pitchers hit their spots. That has been the philosophy all season for the Illini. The team has four pitchers, and none of them are dominating, strikeout pitchers.

This was evidenced by the Illini’s 14-10 win against Georgia Southern on Friday, a game where three of the four Illini pitchers entered the game and where the Illini only recorded one strikeout.

Sullivan knows that for her team to be successful, it needs to work together. She said each pitcher has bought into pitching for contact and letting her defense do its job.

According to Sullivan, the trust between a pitcher and her defense is the most important part of working together on the field, and sophomore pitcher Breanna Wonderly agreed.

“It makes the game a lot easier when you know your defense has your back,” Wonderly said. “It allows me to just focus on hitting my spots.”

On Sunday, the Illini had an afternoon game against Eastern Michigan. Sophomore pitcher Jade Vecvanags got the nod to start the game and took advantage of the opportunity.

Wonderly or senior Shelese Arnold have started most of the games so far this season, but in Vecvanags’ first start of the season, she shut out the Eagles and recorded five strikeouts.

“Jade pitched great today,” Sullivan said after Sunday’s game. “She hit all of her spots, and they couldn’t hit her.”

Vecvanags breakout game was cut short, however, due to a travel curfew. The Illini, up 6-0 at the time, were two outs away from the game counting, so Vecvanags’ strong performance will not count to her season totals.

The strong start for the sophomore is a good sign for the Illini, who could use more depth to their pitching staff. Wonderly and Arnold have pitched a combined 83 percent of the Illini’s innings this season.

Getting closer to Big Ten play

The Illini have spent the past three weekends in the South, but their home schedule and Big Ten play is approaching quickly.

According to junior infielder Allie Bauch, the season gets a different feel when the team gets to Big Ten play.

“It gives us a bigger sense of motivation,” Bauch said. “Big Ten play is when it is definitely time to get down to business.”

Conference play will be a change of pace for the Illini, who will open with a three-game series against Minnesota at home.

While the team is excited to get to Big Ten play, the players know how beneficial these early-season tournaments were to the growth of their team.

“This season more than any other, we saw the benefits of the tournaments we have been playing in,” Sullivan said.

“We have been put into every situation I can think of this winter, and we are a much better team because of it.”