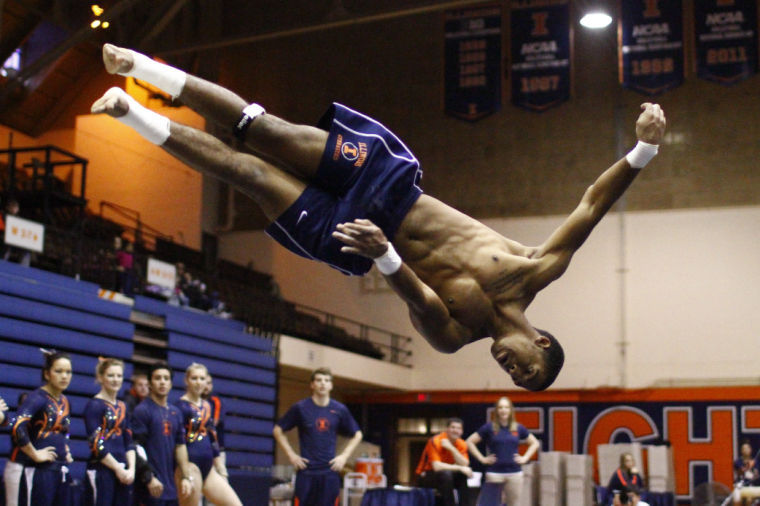 Illinois’ Fred Hartville competes his floor exercise routine during the Orange and Blue Exhibition at Huff Hall on Dec. 9, 2012.

In his third year on the Illinois men’s gymnastics team, junior Fred Hartville feels more at ease with his teammates and coaches this season. After last season, Hartville announced to the team that he was gay.

Being gay was something that Hartville felt the team was aware of before he told them. However, making it official was a choice he made in order to feel completely open with the team.

“I’ve only had positive feedback from it,” Hartville said.

Junior C.J. Maestas said Hartville’s announcement was an emotional time for the team. Part of what Maestas remembered the most was the courage Hartville possessed.

“For him to feel comfortable enough to look us in the eyes and tell us, ‘Hey, guys this is who I am, and I hope you accept me for who I am. I’m not going to change.’ was remarkable,” Maestas said. “We all gave him a hug, and I remember him almost tearing up because it was such a relief.”

While Hartville recognized he could be an inspiration for other gay athletes to come out, he said he’s hopeful it can be a step toward something greater. He hopes it will eventually lead to openly gay athletes being seen as normal instead of brave.

“There’s so many more out there that are still trying to hide behind those closet doors because they aren’t ready, nor do they see other role models that they can look up to,” Hartville said.

Spring said Hartville’s comfort can be related to his life in and away from the team.

“This is something you can hide and (you) have to choose when to feel comfortable enough to put it out there,” Spring said. “That forces a lot of people to live two different lives.”

Similar to Hartville, Spring agreed that Hartville being openly gay can lead to advancement for the gay community.

“It’s a big deal,” Spring said. “This is how the evolution of it being normal starts.”

Dealing with knee injuries throughout most of his sophomore year, Hartville won one vault title against Iowa. This season, Hartville has returned back to the NCAA vault champion form he was in freshman year. In his three meets this season since recovering from knee surgery, Hartville has finished first, second and third in the vault.

Regardless if he continues to post high scores for the Illini or not, Hartville feels secure that he will always have strong support from his teammates and coaching staff.

“I got his back no matter what,” Maestas said. “That’s my little dude.”