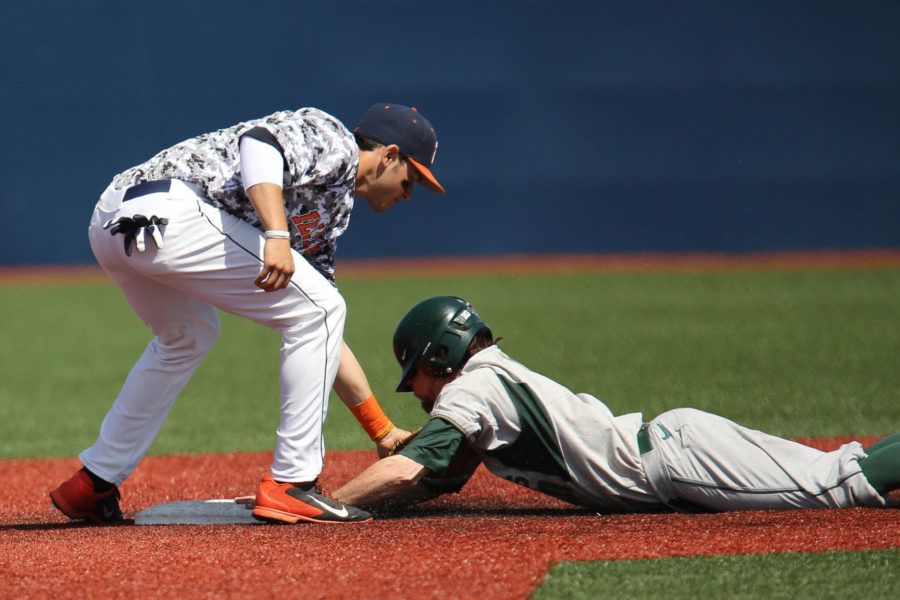 Illinois’ Adam Walton tags for an out during the game against Michigan State. Walton was instrumental in the Illini’s 6-2 win over Oklahoma State.

With one out in the top of the 10th inning at Allie Reynolds Stadium in Stillwater, Oklahoma, Illinois baseball’s David Kerian waited at the plate. Sunday’s game against No. 10 Oklahoma State was tied 2-2 and designated hitter Pat McInerney had just reached first base on a single.

Kerian hadn’t done much during the weekend, but knew he still had a chance to change that. He didn’t waste any time and hit the first pitch he saw — a fastball. He watched the ball fly over the left field fence as he circled the bases; he had made his contribution.

The two-run home run would be enough for pitcher Tyler Jay, who took care of Oklahoma State (8-6) in the bottom of the inning to help Illinois (11-3-1) win the game 4-2 and steal two of three from the host Cowboys.

The rubber match was a tightly contested game. Both teams only held the lead for half an inning each before the extra inning heroics. Oklahoma State struck first in the bottom of the second inning with an RBI single from catcher Bryan Case. Illinois responded in the top of the third when senior right fielder Casey Fletcher pulled a single down the right field line to score third baseman Ryne Roper.

The two teams went scoreless until the sixth, when a wild pitch scored McInerney from third. The Illini loaded the bases in the top of the inning, but only scored on the wild pitch. The Cowboys responded in the bottom of the frame with an RBI single from right fielder Conor Costello, tying it up 2-2.

Senior pitcher John Kravetz pitched a strong game against the Cowboys. He threw seven innings of five-hit ball, gave up two runs and struck out four batters. Jay came in relief for 2 2/3 innings and only gave up one run to pick up the win. The strong pitching performance allowed Illinois to win its first series against a top-10 team since taking two of three against No. 1 LSU in 2009.

Sophomore Adam Walton led Illinois to a strong start to the weekend Friday. The shortstop went 3-for-5 with three RBIs, clocked a two-run home run in the third inning and added a triple in the fifth. The Illini tacked on one run each in the eighth and ninth to secure the 6-2 win.

Junior pitcher Kevin Duchene (2-0) had little trouble in his second start of the season. He took a no-hitter into the sixth inning before Costello hit a two-out single. The left-hander gave up one run in seven innings and struck out six.

Heading into a tough environment against a highly ranked team, Walton knew the importance of starting the weekend on the right foot.

Oklahoma State came out firing in Saturday’s game. The Cowboys scored three runs in the first two innings, but senior Drasen Johnson pitched out of a bases-loaded situation in the second and settled down to retire the next 13 batters.

Illinois’ bats were silent Saturday, only managing four hits and one run — a Jason Goldstein solo home run in the top of the eighth. But by then, Oklahoma had added five runs, enough to finish off the Illini 8-1

The Illini made a statement with its winning weekend. The team has been on the fringe of the top 25 for most of the season, ranking as high as No. 25. Taking two of three against a top-10 team on the road, head coach Dan Hartleb was pleased, but isn’t satisfied yet.

“(This weekend) shows that we can play with anybody,” Hartleb said. “It’s a step in the right the direction, but there’s a long way to go.”