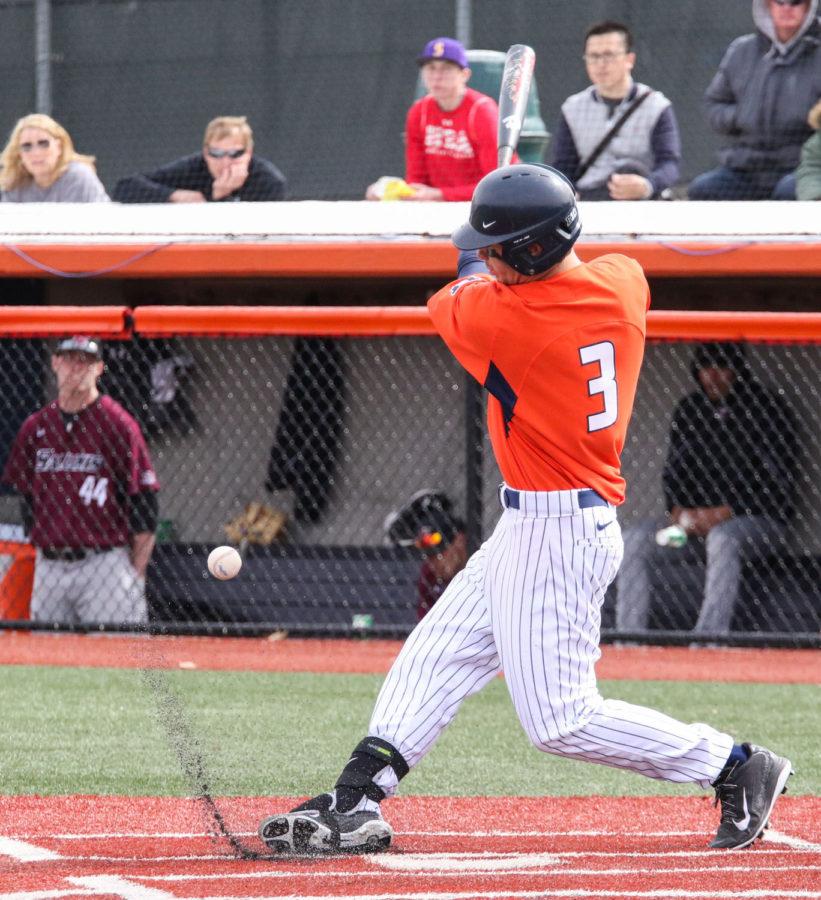 Casey Fletcher slowly strolled to the plate as music blared from the Illinois Field speakers. The center fielder’s two previous at-bats on Sunday hadn’t been strong, but with Illinois and Southern Illinois tied at one in the bottom of the eighth inning, Fletcher stepped up.

With an 0-2 count, Fletcher sent Southern Illinois relief pitcher Ryan Netemeyer’s pitch over the right field wall for a home run. As he stepped on first base, the senior lifted his right arm and raised his right hand — his solo shot giving Illinois a lead it would not relinquish.

The homers helped propel Illinois (14-4-1) to a win in the rubber match against Southern Illinois (3-15), after splitting the first two games of the series.

“We had to get the series win,” Fletcher said. “We like to think that we’re the best team in the state and we want to hold true to that.”

Southern Illinois started off the scoring in the third with three straight singles. Shortstop Chase Slone’s single gave the Salukis a 1-0 lead. Starting pitcher John Kravetz pitched out of the jam, though, giving up the lone run.

The Salukis’ lead was short-lived — Pat McInerney hit a solo home run in the bottom of the third to tie the game 1-1.

In the bottom of the sixth, Netemeyer came into the game for the Salukis and walked three straight batters to load the bases, but Illinois’ Ryan Nagle hit into a double play to end the inning and maintain the tie.

Although Kravetz didn’t get the win, head coach Dan Hartleb lauded the senior’s ability to deliver a quality start.

“That’s why we’ve been so successful. (The starting pitchers) are unselfish,” Hartleb said. “Those guys come out there to put us in a position to win. It’s about quality starts, not just wins and losses.”

The Illini started the weekend cold Friday. Illinois managed seven hits, but none brought in a run. The team’s best scoring opportunity came in the second when McInerney led off with a single and advanced to second on a passed ball, but was caught stealing third.

Cold bats didn’t help starting pitcher Kevin Duchene, who struck out nine Salukis, gave up six hits and allowed two runs. The lone blemish for the junior came in the third — Southern Illinois third baseman Ryan Sabo led off with a home run, which was followed by three singles and a Goldstein passed ball. The sequence allowed the Salukis to take the 2-0 lead, which would stand the rest of the game.

Illinois didn’t waste any time Saturday. After a one-two-three inning by starting pitcher Drasen Johnson in the top of the first, the Illini began the game with four straight hits. Shortstop Adam Walton led off with a single and advanced to second when the center fielder misplayed the ball. Fletcher drove in Walton with a single and moved to second on a Reid Roper single. Both scored on a McInerney double to right field, giving Illinois a 3-0 lead.

Those three runs would be enough for Illinois — the senior Johnson threw his third career complete game and gave up two runs on 10 hits. He was given the opportunity to pitch all nine frames when the Illini scored three insurance runs in the eighth, taking away a save opportunity for Jay.

Kravetz knew the importance of winning the games on Saturday and Sunday after dropping Friday’s opener.

“After Friday, it kind of put the pressure on us, it woke us up a little bit,” Kravetz said. “I think we took them lightly at first, but after that, it woke us up. Hopefully we can keep that going for the future.”