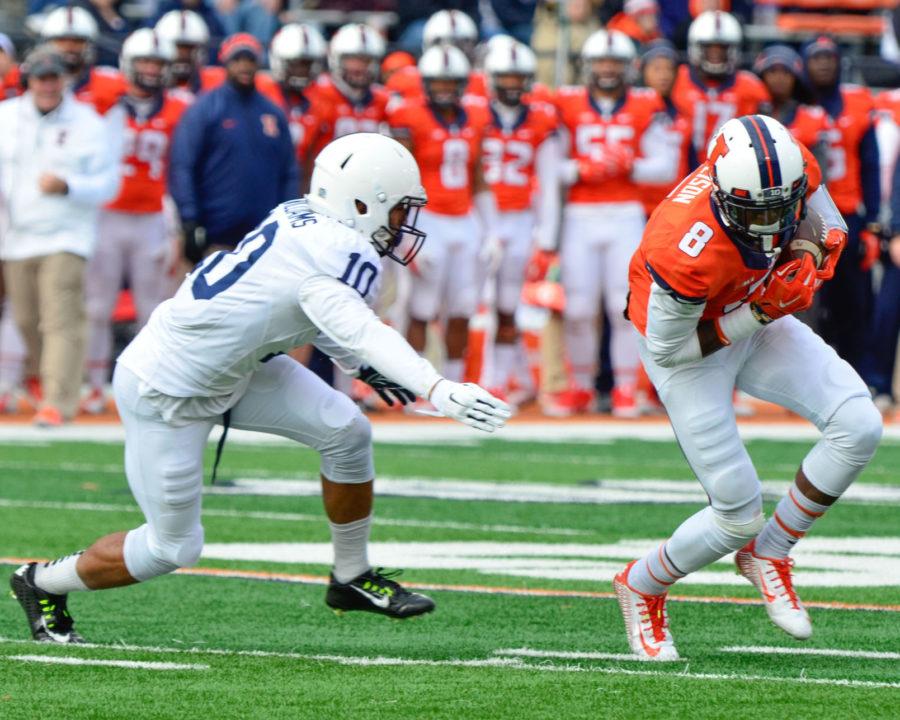 Illinois’ Geronimo Allison  carries the ball during the game against Penn State at Memorial Stadium on Saturday, Nov. 22. The Illini won 16-14.

With just one week left of spring practices, the Illinois football team received devastating news last week when it was announced that freshman standout Mike Dudek would miss at least six months.

After the star wide receiver partially tore his ACL in a noncontact drill at practice last Wednesday, the Illini are tasked with finding his replacement in the slot. Dudek is aiming to make a return in October.

As a freshman last season, Dudek led the team with 76 catches and 1,038 yards and six receiving touchdowns.

“We all have a role that we have to fill. We all have to step up,” senior Geronimo Allison said.

Fellow sophomore Malik Turner was a candidate to replace Dudek in the slot, but the injury bug will also keep Turner from competing in Saturday’s spring game. Turner has a high ankle sprain that will hold him out of practice for the remainder of the spring, and was in a walking boot at practice on Monday. Turner and Allison are generally considered to be prototypical X and Y receivers, at 6-foot-3 and 6-foot-4, respectively. But Allison said that there isn’t much difference in moving from the numbers to the hash marks.

Junior Dionte Taylor also projects to be a replacement in the slot, and he fits the mold as at 6-foot, 190 pounds. Taylor has seen limited time in his first two seasons in Champaign and recorded just one catch for five yards.

However, outside of returning veterans Geronimo Allison and Justin Hardee, offensive coordinator Bill Cubit said no wide receivers have separated themselves this spring. The Illini have two wide receivers signed to join the team in the fall, but without Dudek, depth at wide receiver is a concern.

If no wide receivers step up and take responsibility, Cubit said that the Illini have plenty of options on who to split out wide. To give the defense a bigger look, the Illini could put tight end Andrew Davis out in the slot or go smaller and have running back Josh Ferguson line up in the slot. Ferguson was second on the team with 50 catches last season and ranked third with 427 receiving yards.

“We can do a lot of different things,” Cubit said. “Ferguson could be one of our best wideouts, but he’s also a pretty dynamic at that running back spot.”

As the trickle down from shifting positions around, Cubit said the Illini will need to rely even more heavily on early enrollee Dre Brown at running back; Cubit called the freshman “one of the most improved players we have here.”

“With Bill’s offense, you’re able to move people around in order to enhance their playmaking opportunities,” head coach Tim Beckman said. “We can give a lot of different looks.”