Illinois baseball gets sweep of Purdue in pitching duel 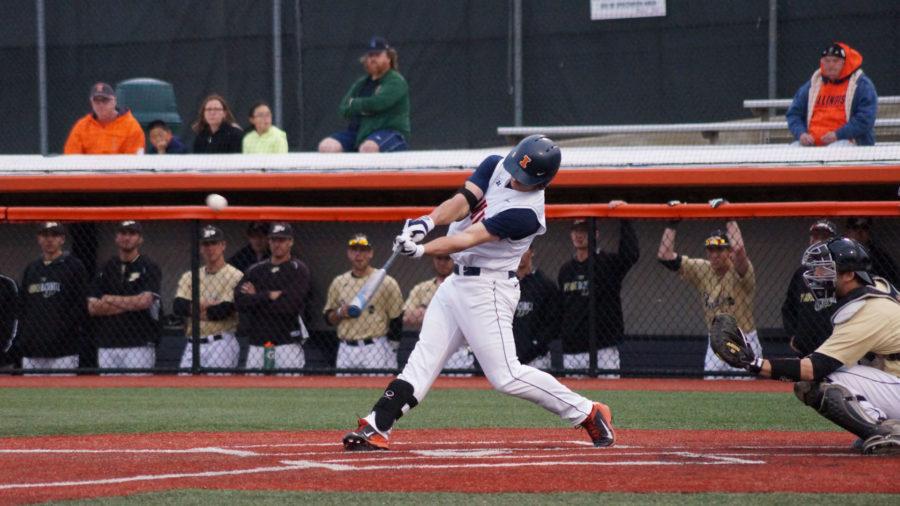 Reid Roper makes a hit during the game against Purdue at Illinois Field on Monday. Roper led off the fourth inning with his second triple of the season, tying the game. The close finish secured the team's best start in franchise history.

There were runners on first and third base when Illinois baseball’s center fielder Will Krug walked up to the plate during the bottom of the seventh inning. There was one out in the inning of Monday’s game against Purdue and the game was tied 1-1.

After a strike and two fouls, the senior slapped a routine ground out to the shortstop. Purdue freshman Harry Shipley cleanly fielded the ball but his throw to second base sailed over the second baseman’s head and into foul ground on the first base side. Catcher Jason Goldstein sprinted home what would be the go-ahead run in Illinois’ (29-6-1, 8-1 Big Ten) 2-1 win over Purdue (11-24, 1-8).

With the win, Illinois secured its 10th-straight victory and second series sweep of the season. The Illini beat the Boilermakers 10-5 on Saturday and 5-1 on Sunday.

“We got our job done when it counted most,” Krug said. “Our pitchers picked us up today. Two runs got the job done and that’s what a good team does.”

Monday’s game was a tightly pitched game most of the way. Both Illinois starting pitcher John Kravetz and Purdue starting pitcher Matt Frawley shut down their opponent’s offense and got out of jams when runners reached base.

Purdue scored first in the second inning when right fielder Jordan Lewis hit a home run right at the new video scoreboard in right field to give Purdue the 1-0 lead. The Boilermakers added two more singles after the homer, but Kravetz pitched his way out of more damage.

Illinois tied the game in the fourth when second baseman Reid Roper led off the inning with a triple, his second of the series. Designated hitter Pat McInerney then grounded out to the second baseman, sending Roper home from third.

Despite the lone second-inning run, Kravetz had a strong performance. The senior faced 20 batters in five innings, gave up five hits and struck out four. He faced jams in the second, fourth and fifth but pitched out of them to keep the Illini in the game.

Closer Tyler Jay came into the game in the sixth in relief Kravetz for his first appearance of the weekend. Jay pitched four innings and struck out three of the 10 batters he faced, only giving up one hit.

Head coach Dan Hartleb’s plan was to pitch Jay in multiple innings since the junior hadn’t pitched in Saturday or Sunday’s games. With at least a dozen major professional scouts watching his every move from behind home plate, Jay silenced the Purdue bats once Illinois took the lead.

“Our pitching again was good,” Roper said. “Kravetz battled. I don’t know if he had his best stuff but he still battle and got out of jams.”

With the 10-game win streak, Illinois is off its best start in franchise history. The Illini have a quick turnaround from Monday night — they play Illinois State Tuesday afternoon. Krug knows for the players to continue this momentum, they need to stay focused and not worry about anyone else.

“We have to compete against no one else except ourselves.”