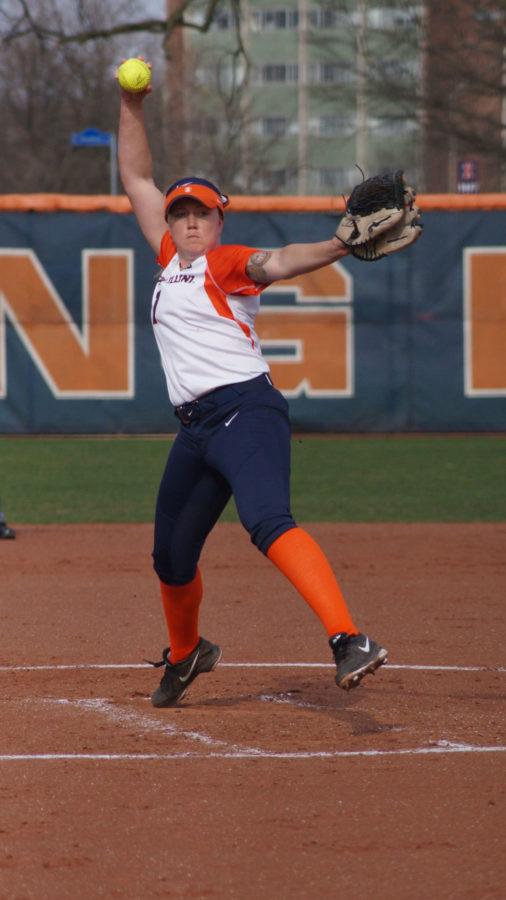 Illinois’ Jade Veccanags pitches the ball during the softball game vs. Indiana State at Eichelberger Field on April 8. She has become the Illini’s go-to pitcher.

The Illinois softball team travels to Chicago to take on DePaul on Wednesday for a one-game series.

The Illini (18-21, 8-4 Big Ten) have been on a tear lately, winning six in a row, and 10 of their last 11. Head coach Terri Sullivan’s team looks to continue that winning streak against the Blue Demons (15-18, 7-1 Big East). This is the final nonconference game of the season for the Illini, and Sullivan said she thinks that it is a good opportunity for her team to keep the momentum up down the stretch.

“(DePaul) always puts up a good fight,” Sullivan said. “It is always a good experience to play in Chicago and against such a good team. These mid-week games are important, and we always expect a challenge.”

Illinois’ struggles stemmed from defensive errors and too many runs allowed. The Illini gave up almost seven runs per game through the first 24 games, while scoring fewer than five runs per game.

DePaul’s offense barely averaged more than four runs per game through its first 24 games, and its opponents put up over nine runs per game. The Blue Demon defense has committed 52 errors this season while the Illini have committed 47.

Both teams’ early season misfortunes were reversed when conference play started. The Illini have won three straight conference series after being swept by No. 16 Minnesota in the conference opener and sit at fifth place in the Big Ten.

In conference play, the Illini offense has nearly doubled its output from the first part of the season, scoring almost nine runs per game.

The Blue Demons sit in second place in the Big East. Since conference play began, DePaul has scored almost 10 runs per game.

Vecvanags has taken on the bulk of the pitching responsibilities for the Illini since conference play began and in the last four games, she has found her groove. In the win on Sunday against Maryland, Vecvanags had one of her best moments of the season, according to Sullivan, when she ended the game with a nine-pitch at-bat, striking out Shannon Bustillos, who had struck out six times this season prior to facing Vecvanags.

“It makes it a lot easier knowing that Jade has our back,” captain Allie Bauch said. “When we know that she has our back, and she knows that we have her back, we are pretty much unstoppable.”