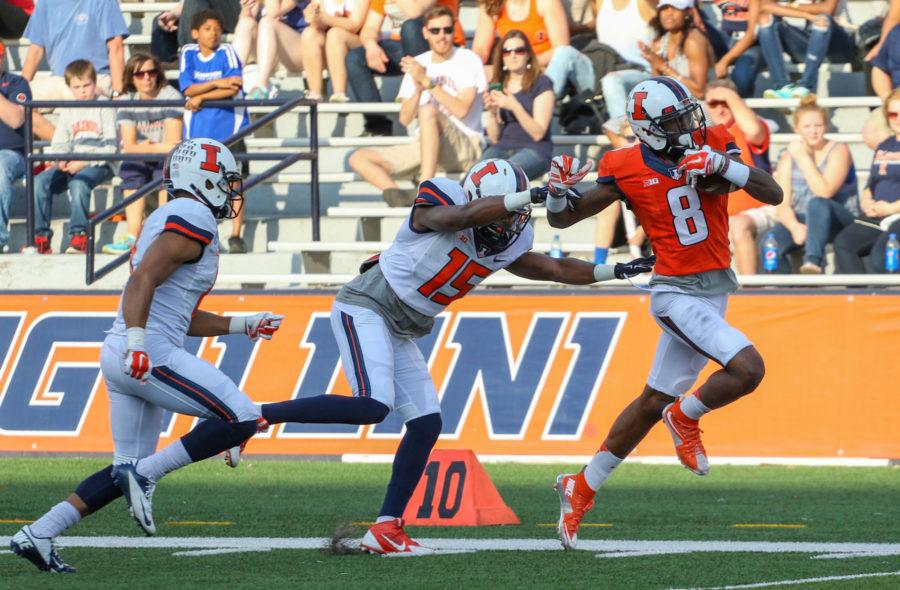 Despite a 17-point deficit to start the game and another 17 points awarded to the White team at halftime, the Orange team won the annual Illini football Spring Game 44-41 and earned steak dinners.

With the Orange team consisting of starters and ones, and the White team mostly twos and threes, head coach Tim Beckman wanted both teams to compete as if the game were a regular-season matchup.

Despite the second-string opposition, quarterback Wes Lunt showed off his arm. After battling injury for half of last season, the starting quarterback threw 17-of-26 for 236 yards and two touchdowns in the first half.

Lunt started off the game missing a few throws and completing some for small yardage, but the junior heated up as the half progressed and improved with a few throws, including a 43-yard touchdown pass to senior wide receiver Geronimo Allison.

The 43-yard touchdown was one of two that Allison caught. The senior finished with 121 receiving yards on four passes.

Senior Justin Hardee led the way with 124 receiving yards on six passes and one touchdown.

Lunt said the transition without No. 1 wide receiver Mike Dudek, who tore his ACL in spring practice on April 8, was a struggle for the offense at first. The offense has made adjustments — specifically moving up Dionte Taylor and relying more on starting running back Josh Ferguson.

“I thought our offense made a step forward,” Lunt said. “We’ve been struggling a little bit just getting our footing since Mikey, but today was nice to see the receivers and Henry really step up and make strides.”

Beckman announced Saturday that freshman running back Dre Brown partially tore his ACL at Thursday’s practice during a non-contact drill. The team inspected his knee after noticing swelling and found out the severity of the injury on Friday.

Brown was a 2015 recruit who enrolled at the University early so he could participate in the spring portion of the season. He was ranked the seventh-best player and the second-best running back in the state according to 247sports.com.

The freshman was having a productive spring and both Beckman and offensive coordinator Bill Cubit have said that if the season was underway, Brown would be the No. 2 running back behind Ferguson.

Brown’s injury is the second ACL tear suffered by an expected offensive contributor this spring.

Dudek is expected to return in October after his injury earlier this month.

“It’s one of those things that happen,” Beckman said. “You never want it to happen. Nobody wants to get hurt … you’re going to have to dial back and try to treat it in a positive manner.”

Junior running back Henry Enyenihi was the most utilized running back for the Orange team after Ferguson played just the first series.

Enyenihi said he was surprised when he heard about Brown’s injury.

“It was kind of a shock to me, and I had to adjust my mindset,” Enyenihi said. “But it was good. I needed something like that.”

The junior ran for 92 yards on 16 carries. With the benefit of playing with the starting offensive line, he found holes and even broke out for a 43-yard run.

Ferguson only ran the ball once and finished with minus-6 yards. With the amount of injuries the team has suffered during the spring, the coaching staff didn’t want to run the risk of hurting Ferguson.

Coaches have said throughout the spring that Ferguson has made improvements with his runs and that there is nothing to worry about when it comes to the fifth-year senior.