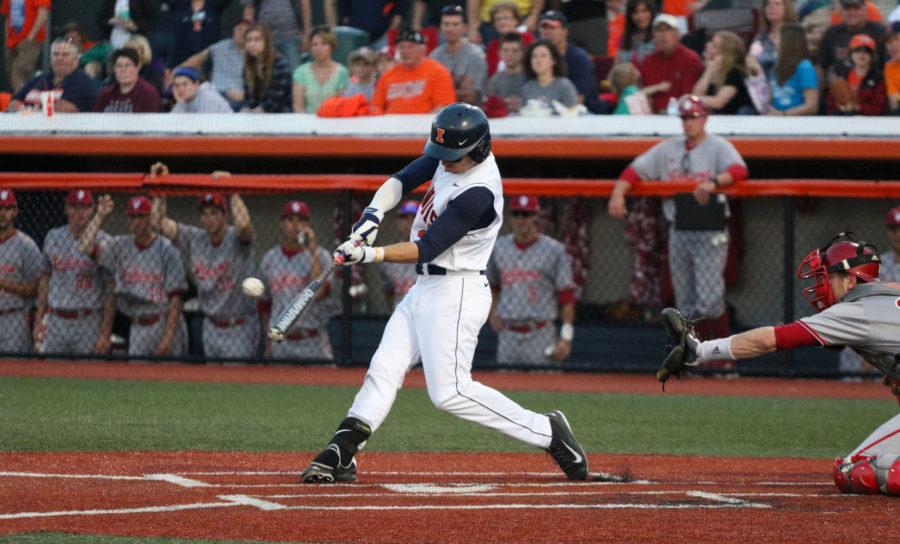 Illinois’ Casey Fletcher (3) takes a swing at the ball during the baseball game vs. Indiana at Illinois Field on Friday. Illinois won 5-1.

A large black plaque and eight smaller ones hang on the wall behind the Illinois Field press box. Written on the large board is “Past Illinois players in the Major Leagues with at Least 1 year of service” with 36 names listed. The eight individual plaques have greater detail — a picture of each young man with his name and the professional teams he played for.

Thousands of fans, players and coaches pass these plaques each season. Some stop and take a glance while others move past it on their way to the two adjacent condiments stands to find ketchup, mustard, popcorn seasoning and napkins.

On a beautiful, sunny day without a cloud in the sky, the sun shines upon the gold letters of the testament to time, creating a glow that only legends deserve.

There are two names that shine even on cloudy days for Illinois baseball’s Casey Fletcher. One lies on the large black plaque and reads “Tom Fletcher, Det Tigers 1962,” while the other is a plaque with a photo of a smiling baseball player, under which is written “Darrin Fletcher, Drafted Los Angeles NL 1989-90, Philadelphia NL 1990-91, Montreal NL 1992-1997, Retired Toronto AL 1997-2002.”

They are the names of his grandfather and father. The journey to follow in their footsteps didn’t go as easily as planned, but it’s made him stronger and ready for the next step in his journey.

Casey sat at his table inside Hickory River Smokehouse in Urbana. Before him on his plate sat a pulled pork sandwich with medium sauce, corn bread, applesauce and macaroni and cheese . The high school senior was excited to be in a room filled with the smell of barbecue in the middle of a school day — he had traveled to Urbana from his hometown in Oakwood, Illinois, to visit with Illinois baseball’s head coach Dan Hartleb.

Fletcher’s youth was different from most boys. His father, Darrin Fletcher, was a major league baseball player. Casey grew up going to Montreal Expo and Toronto Blue Jay games, hanging out in the clubhouse with his dad’s teammates, even some Hall of Famers. All of this was normal for Casey: He thought all children had athlete fathers and could go to any game they pleased.

It was not until Casey was 12, after his father retired, that he realized how lucky he was that his grandfather and father had played in the majors. He reminisces about taking batting practice in a hitting cage set up in his grandpa’s barn in Oakwood.

“It was great to have those guys because I had a hitting coach my whole entire life,” Casey said. “As soon as he retired, he watched all of my games to support me and give words of advice, and that’s the key thing for me, I don’t know what I would’ve done if I didn’t have a dad being there to support me like he did.”

Casey played Pony League in Canada and played for a few travel teams before arriving at Oakwood High School. At Oakwood, he wasn’t only limited to the plate. Casey posted a 4-2 record, 3.54 ERA and 48 strikeouts on the mound while batting .450 during his senior year.

Even with his high school success, there were few offers to play Division I baseball. Many coaches didn’t think he was mature or could handle the day-to-day grind. But Hartleb decided to meet with him in the smokehouse just off Interstate 74. The coach told Casey that he couldn’t assure him a spot, but encouraged him to play junior college ball. After two years, Hartleb agreed to give him another look.

Although Casey wasn’t happy with how the lunch went, he knew what he had to do in order to continue the family tradition of playing at Illinois. Casey’s great-grandfather Glenn Fletcher even played baseball for the Illini.

“It was very special to me,” Casey said. “I didn’t know where I was going to go. I really wanted to come here, but just being able to have that backing from (Hartleb), just to say ‘Hey, maybe you should do this, we’ll give you a look in two years,’ that was just really special to me.”

Eric Snider stood just beyond the dugout of the Kankakee Community College Baseball Field during a game in the spring of 2013. There aren’t many stands for the Cavaliers’ home field — it’s a diamond with two sets of bleachers and a dugout for the home and visiting teams.

The then-Illinois assistant coach drove up to Kankakee, Illinois, to watch Casey. He arrived two hours early to see the sophomore. Snider watched as Casey caught balls in the outfield and fired them all the way back to home plate. He watched as Casey warmed up by hitting a ball off a plank. This kid seemed a lot different from the high schooler Snider had seen two years earlier.

Casey was a two-time NJCAA All-American during his two years at Kankakee, earning third-team honors both years. He hit .397 and .381 during his freshman and sophomore years, respectively, and was second in NJCAA Division II baseball in 2013 with 69 RBIs. He had put in the work to draw the attention of the Illini after two years in junior college.

That evening two years ago, Snider saw Fletcher’s four at-bats. After the game, Casey joined him behind the dugout. The sophomore was quiet, a trait Snider believes indicates confidence and is the essence of a good baseball player. The assistant told him he should consider coming to Illinois and try out for one of the open outfield spots.

Casey smiled, his hard work had finally paid off.

“He had worked habits where you could tell he loved to work,” Snider recalled. “I just thought it was going to be a great fit for the type of player that we want to bring in to Illinois.”

After the two were done talking, Casey called his father to tell him the good news. His father told Casey there was no pressure from him to choose Illinois. Other schools, such as Morehead State and St. Leo were offering him playing opportunities. But the choice was obvious to Casey.

“All the work that I had done for those two years, I’d finally gotten the opportunity to come and play here.”

Darrin Fletcher stood in the stands of Illinois Field on a sunny April Saturday. The Illini were getting set to face Purdue. Friends and fans passed by with greetings and a handshake, saying how great the season was going for the Illini. He’s made nearly every home game this season.

He walked down the steps toward the fence that separates the field from the spectators.

Players started to come out of the clubhouse and make their way onto the field as Darrin leaned against the fence. His son made his way down the fence and found Darrin wearing a white baseball cap with an orange polo and sunglasses. The two shook hands and exchanged words, Casey scuffed his feet on the warning track while his father continued to lean, listen and answer.

Casey had made the team during the fall of 2013. Last season, he was a third-team All-Big Ten outfielder and led the Illini with six home runs, which ranked fourth in the Big Ten. He had three consecutive game-winning hits. This year, he hasn’t skipped a beat. He’s batting .333 this season with 25 RBIs, three home runs and stellar defensive play in the outfield that fellow senior outfielder Will Krug calls “instinctual.”

But it’s not only his performance on the field that makes him a team leader — he isn’t afraid to crack a joke when the situation is tense.

Casey’s baseball future is uncertain. He will play the rest of the season and wait for the MLB draft to see if he’s selected. He will continue to work as he did to make it to Illinois, trying to continue the family tradition that was started by his grandfather.

Casey went 4-for-4 in that April 11 game against Purdue, with an RBI and two runs scored. He made his way to the press box of Illinois Field and credited the strong performance from pitcher Kevin Duchene and the team’s ability to get after the Purdue pitcher. He took a picture that was posted on the team’s Twitter page, but after, he returned to his family.

On Mom’s Weekend, all the senior moms threw out a first pitch to their sons and Casey was proud to say that his mother threw a perfect strike.

The gleam coming from the gold letters dims as the sun sets for the day. It’s a fitting analogy for Casey’s career at Illinois as he readies for his final few series.

He’s traveled a long road to make it where he is today, but there’s still some work left to be done.

Maybe one day the sun will rise and shine on the plaque as it usually does and a third Fletcher name will glow.