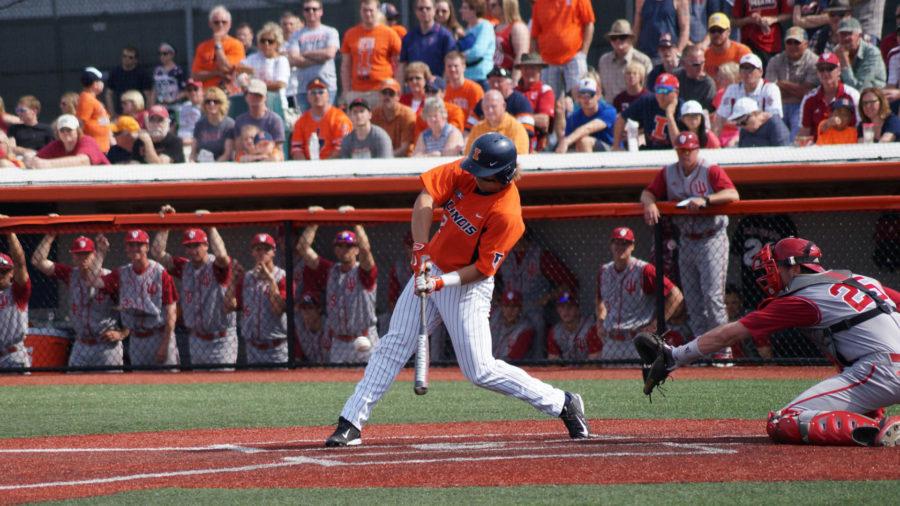 Illinois’ David Kerian (12) attempts to make contact with the ball during the baseball game vs. Indiana at Illinois Field on Saturday, April 18. Illinois won 6-3.

Looking at the Illinois baseball team’s lineup, it is difficult to pick out the team’s best hitter.

This season, five Illini are hitting over .300, six batters have at least 25 RBIs and all but one of the regular starters have scored at least 25 runs.

Such balanced hitting up and down the order has been a major factor in Illinois’ record 21-game winning streak. With a closer look at the numbers, though, one hitter stands out. And even though he would never say it himself, senior first baseman David Kerian has arguably been the Illini’s top hitter all season.

In fact, Kerian was the best hitter in the entire conference this past week, earning Big Ten Player of the Week honors after a four-game stretch during which he batted .600 with a home run, five RBIs and six runs scored. Illinois won all four games, including an impressive road sweep of Ohio State.

“It feels great getting recognized for something and for a great weekend,” Kerian said. “Our team as a whole this weekend and whole week just came out and battled and had great at-bats. We had a bunch of guys who were huge this weekend to take three wins.”

Kerian was the third Illini to win Big Ten Player of the Week this season — senior outfielder Casey Fletcher was honored last week and junior catcher Jason Goldstein earned the award earlier in the year. While Goldstein and Fletcher consistently hit in the heart of the Illini batting order, Kerian does all of his damage out of the seventh slot in the lineup.

Despite hitting in the bottom third of the lineup, Kerian leads Illinois in many major offensive categories. With a .366 average, .621 slugging percentage, .456 on-base percentage, 11 home runs and 100 total bases, Kerian has the stats you’d expect from a cleanup hitter.

Head coach Dan Hartleb has taken pride in the fact that opposing pitchers never have an easy out when facing his lineup, and Kerian has been a force near the bottom of the order all season.

“He’s been consistent,” Hartleb said. “The entire year, he’s had quality at-bats and has come up in key situations, and he’s been leader for us. He’s carried himself well and has played with great confidence. He’s a really good player.”

In Big Ten games, Kerian’s numbers are even better. With a .394 batting average, three home runs, 15 RBIs and a team-leading .606 slugging percentage, the 6-foot-3 switch hitter is a large reason why Illinois has won all but one of its 17 conference games.

Long before Kerian began tearing up the Big Ten, his father, Steve Kerian, put together a successful career as an amateur fast-pitch softball player in Iowa. The elder Kerian played shortstop for five Amateur Softball Association national championship teams from 1978 to 1999 and was even a part of the 1988 gold medal-winning USA team in the 1988 quadrennial International Softball Federation Championships.

Kerian, who also played shortstop in high school, credits his father for developing his passion and skills for baseball.

“He taught me everything I knew up until college,” Kerian said. “He was my coach, he was my hitting coach and he had everything up in his head planned out for me. It definitely helped, and then the coaches here put me on the right track.”

Kerian has used the Illinois coaching staff’s teachings to improve every season since becoming an Illini. Kerian’s conference-leading 11 home runs are more than he had in his first three seasons combined, and his total bases, slugging percentages and strikeout rates have improved every year.

As the senior’s days as an Illini are winding down, Kerian — and his team — have never been better.

With just six games remaining in the regular season and Illinois poised to clinch a national seed in the postseason, Kerian hopes to make the most of the time he has left as an Illini.

“It’s kind of surreal right now signing all the papers and stuff to be graduating,” Kerian said. “It’s definitely going to be memorable for us and we’re going to continue making memories. It’s going to be a fun finish.”