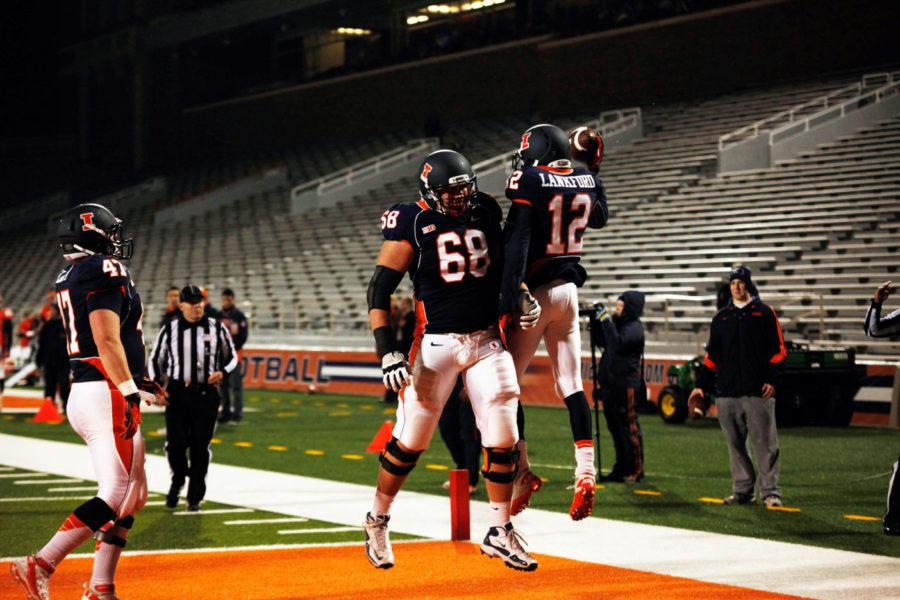 Ryan Lankford (12) and Simon Cvijanovic (68) celebrate after Lankford scores a touchdown at the orange and blue spring scrimmage at Memorial Stadium on April 12, 2013.

Simon Cvijanovic, a former tackle for the Illinois Football team, had some strong words on Twitter for head coach Tim Beckman on Sunday.

Cvijanovic said he was asked by Beckman and the Illinois program to, “push myself past pain until I didn’t want to play anymore.”

In a series of tweets that began Sunday afternoon, Cvijanovic accused Beckman and the program of pressuring injured players, including himself, to get back on the field.

Some of his tweets also included the hashtags “#followthemoney” and “#truth.”

Cvijanovic’s 2014 senior season ended when he was injured against Ohio State. Shortly after, he left the team, and was not invited when the team traveled to Dallas to play in the Zaxby’s Heart of Dallas Bowl. He was also not invited to the senior banquet and accused Beckman of kicking him out of his office because the coach couldn’t explain why.

When contacted for comment, the athletic department sent out a statement from Beckman that said, “We wish him success in completing his degree, and we wish him the best of success in whatever he pursues after he graduates.”

Beckman’s statement also asserted that the University provided Cvijanovic with medical care, an academic scholarship and advising during the spring semester.

The statement also added that, “We cannot make any student accept our support.”

Another former Illinois lineman said via text message that, “Be ready for a couple of guys to possibly come forward.” He went on to add that if any further players come forward with stories, they’re likely to be Zook recruits, and not current players, who may not want to expose themselves.