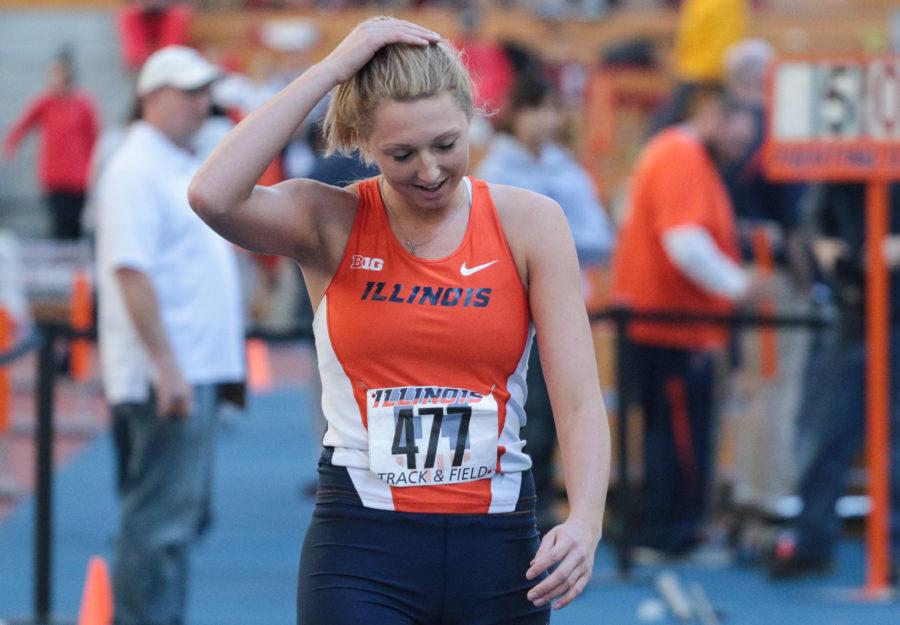 The Illinois women’s track and field team traveled to Austin this past weekend for the NCAA Division I Track and Field West Preliminary Round.

Head coach Ron Garner said Bloch-Jones and Richartz “met the objectives. They had good performances, and we’re excited because we believe both can do very well at the finals.”

Richartz tied for fourth on pole vault at 4.24 meters. This mark, tied with multiple other competitors, set a new NCAA West Preliminary Round record.

Richartz said her past two times competing at this meet were hectic and intense. Both times, she had to participate in a jump-off, which occurs when athletes are tied for the remaining spot to advance to the Championship. The athlete to clear the highest clearance first, advances.

In the 2012 season, Richartz fell short in the jump-off and placed 13th overall, but in the 2013 season, she was victorious and placed 12th to advance to the Championship.

Due to her history at the NCAA West Preliminary Round, Richartz said this weekend she “was just trying to remain calm and jump like it was the Big Ten meet or any other meet.”

She said usually the pressure of competition doesn’t faze her, but sometimes, the qualifying rounds can get her “worked up.”

In addition to the NCAA meet, Richartz is qualified for USA Nationals, which is the equivalent to the Olympic trials.

Although Richartz has 2016 Olympic dreams, she said, “I’m trying to take everything one day at a time and just be present now before I look too much into the future.”

Bloch-Jones ended the West Preliminary Round with a clearance of 1.78 M to tie her for eighth. Despite strong winds and missing every bar in warm-ups, her first three attempts in competition were clean, keeping her out of the jump-off.

Garner said it was critical that she hit those first three bars clean and it was good preparation for the Outdoor Championships.

Bloch-Jones said she kept her cool and treated this meet just like every other one. She said she tried not to change anything or worry about what would happen.

Richartz said she was proud of her whole team, including the men who had nine athletes qualify for the Outdoor Championships.

For the women, seniors Alyssa Schneider, Amanda Duvendack and Breeana Coleman, juniors Britten Petrey and Jennifer DeBellis and sophomore Nicole Choquette also competed at the West Preliminary Round, but fell short of the 12th place finish needed to advance to the Outdoor Championships.

Garner said it is always disappointing when athletes who work hard and perform at a high level are not able to advance. He said those who didn’t advance still competed well and were a positive representation of the University.