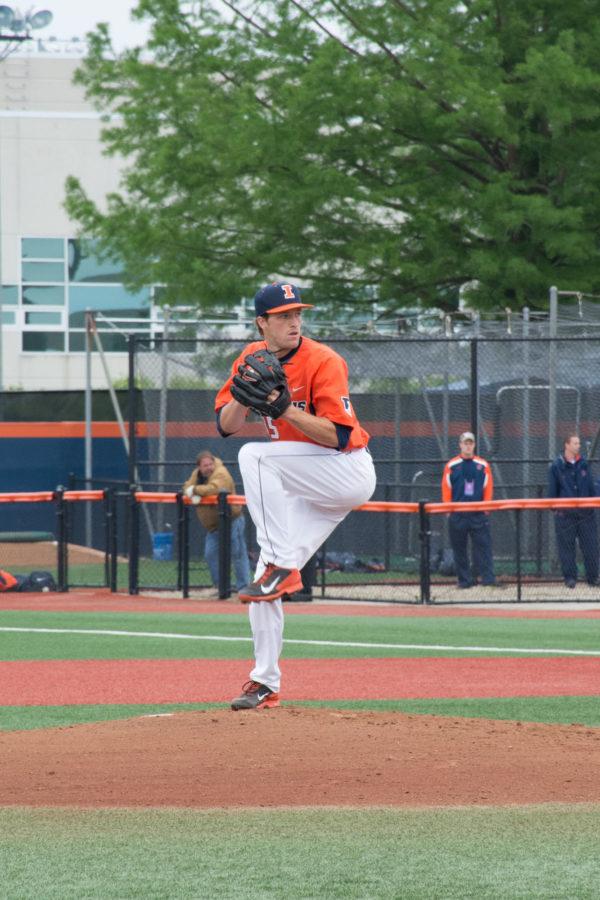 Illini pitcher Drasen Johnson winding up during his 9-inning shutout against Notre Dame at Illini Field on May 31.

The Illinois baseball team shutout Notre Dame by a score of 3-0 in the second game of the NCAA Champaign Regional. The team is now one win away from reaching its first super regional.

The first four innings were quiet for both squads – no runs were put on the board. Notre Dame loaded the bases in the first, but starting pitcher Drasen Johnson pulled himself out of the early jam.

“I thought we won the game in the first inning because of his guts,” head coach Dan Hartleb said of his starter.

Along with Johnson’s strong pitching, he had six strikeouts in his complete game victory, his defense provided much help.

In the fourth, sophomore Adam Walton made a leaping grab to end the inning. Walton has had a good showing through the Regionals after having an abysmal performance at the Big Ten Tournament.

“I knew I was going to be ready to go this weekend and wanted prove to the coaching staff and the team that I was the shortstop that I’ve seen all year,” Walton said.

The fifth inning was when the Illini would score all of their runs. Ryne Roper hit an RBI double to get the first run. Walton followed with an RBI double of his own to allow Roper to score. When Reid Roper went up, he hit a sac fly that allowed Walton to score.

Outside of the fifth inning, where he gave up three runs, Notre Dame’s Ryan Smoyer also had an impressive game. Smoyer threw two strikeouts and kept most of the Illini hitters in check. Notre Dame pulled Smoyer in the eighth inning for Evy Rubial who also impressed. Rubial had two strikeouts in one inning.

First-team All-American Tyler Jay was warming up prior to the ninth inning, but the coaching staff opted to stay with Johnson for the final inning. The last time pitched was on May 23 against Michigan at the Big Ten Tournament in Minneapolis, Minnesota.

“If you look at the game winning hits, and the number of people who have come through in clutch situations, it’s one through nine.” Hartleb said of his team.

The Illini will face the winner of the game between Wright State and Notre Dame on Monday at 1 p.m. Hartleb said that senior John Kravetz will get the nod for Illinois. Due to the tournament being played with a double elimination format, if the Illini lose, then the team will play another game.

Check out a gallery of the game here.