Illinois gets crushed by Vanderbilt 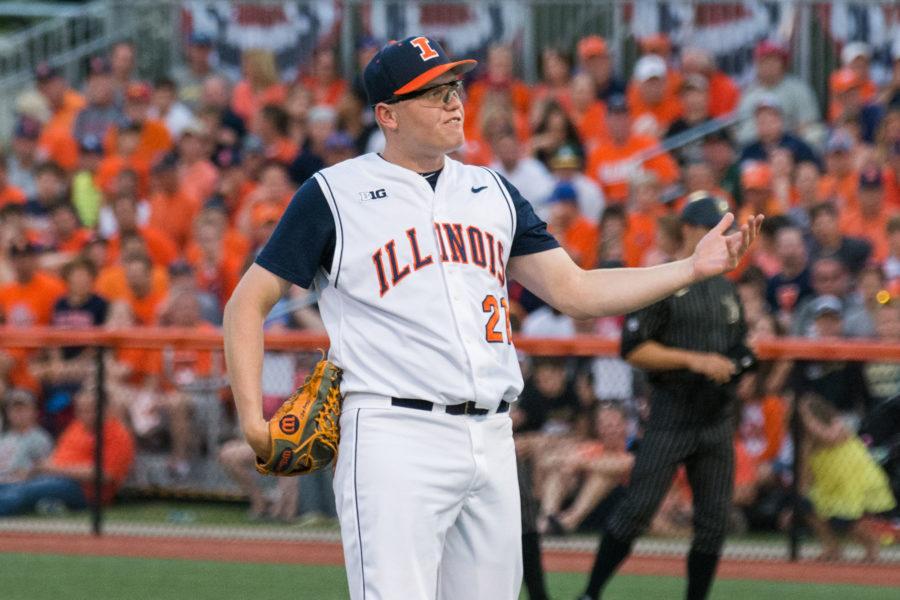 Illinois' starting pitcher Kevin Duchene shows his frustration during Vanderbilt's convincing 13-0 victory over the Fighting Illini during their first game of the NCAA Super Regionals at Illinois Field on June 6.

The Illini baseball team had a rough outing against the defending College World Series champions, losing 13-0 to Vanderbilt Saturday.

There was a lot of hype heading into the Champaign Super Regional. A few players on both teams are predicted to be taken in the early rounds of the MLB draft starting this Monday. For Vanderbilt, shortstop Dansby Swanson and Carson Fulmer are thought to be two of the best players in all of college baseball. Swanson is predicted in some mock drafts to go No.1 overall to the Arizona Diamondbacks.

There were 3,605 in attendance for the first game at Illinois field. The talent was one of big reasons the Champaign Super Regional was one of the most highly anticipated. A few Hoops coaches were in attendance, such as Illinois Women’s basketball head coach Matt Bollant and Indiana head coach Tom Crean.

The Commodores came out strong, scoring three runs in the first inning. Starting pitcher Kevin Duchene struggled throughout for Illinois. His rough outing led to him being pulled after four innings.

Duchene has struggled in recent weeks with his control, and the struggles continued Saturday.

Fulmer seemed to be the exact opposite. He kept the Illini scoreless in his seven innings of work.

The fifth is where it all fell apart. A debatable interference call created a Vanderbilt run. The commodores then blew the game open with four runs in the inning. This led the Illini to cycle through several pitchers to try and preserve arms for the rest of the series. Even so, closer Tyler Jay was not brought in for the game.

Vanderbilt fans had a strong showing, and in some instances out cheered the home crowd who outnumbered them.

A home run in the seventh by the Commodores continued the slugfest. This was followed by an Illinois soul-crushing four runs in the top of the ninth. This left a sour taste in the mouths of the Illini faithful. Many of the crowd had left the game starting in the fifth inning.

Illinois will have to win Sunday’s game in order to extend its best-of-three series into Monday. The team will continue with a formula that they believe in. A formula that has been used all season to get to this point.

“We just didn’t get our job done as much as we should have,” left fielder Ryan Nagle said of his team’s game-plan execution.