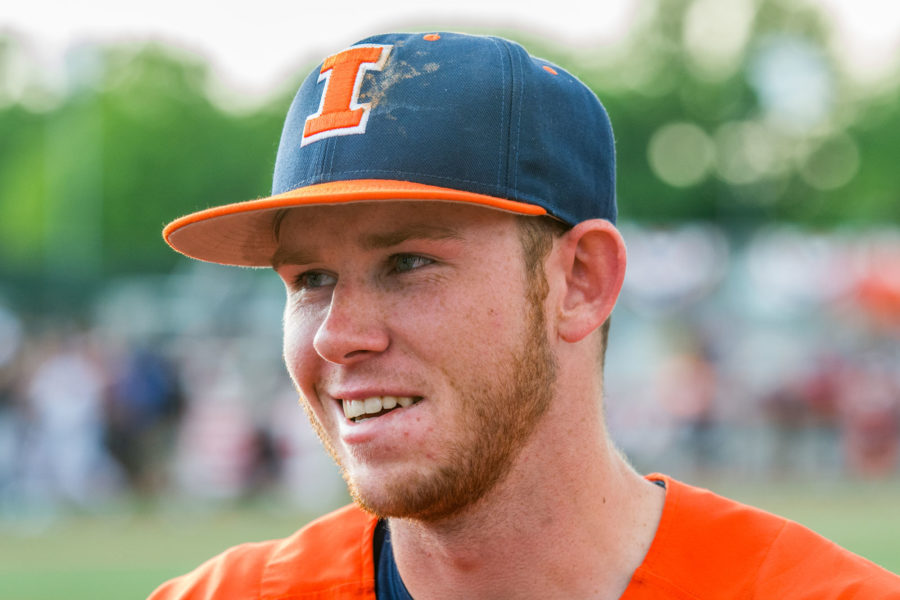 The Illini baseball team’s season ended on a bitter note after losing to Vanderbilt in the Champaign Super Regional on May 8.

Illinois’ bullpen was the story of the draft, with five pitchers selected.

First off of the board was left-handed pitcher Tyler Jay, who went to the Minnesota Twins at the sixth overall spot.

“It’s definitely special,” Jay said. “A lot of great players came through here. They pulled up a bunch of former guys who played in the pros.”

Jay is one of the projected favorites to get to the majors the quickest. His work ethic is seen as a key point in his ability to move up the ranks quickly.

“There would be days when we were off, but there was a group of guys who would always go lift on off days,” Hartleb said. “Tyler was pushing guys to go in and take the extra steps to be successful.”

Later in the draft, Illinois ace Kevin Duchene was taken in the fifth round by the Oakland Athletics. Duchene is expected to leave Illinois to take up his chance in the pros.

One of the more interesting picks of the draft was Nick Blackburn, who went to the New York Mets in the 22nd round. Blackburn played mostly in a relief role for the Illini, usually setting up for Tyler Jay. Blackburn’s showing in the team’s final game may have impressed.

Blackburn had two strikeouts against the commodores in relief of Jay. One of the players he struck out was shortstop Dansby Swanson, who would go on to be the number one overall pick in the draft.

The next player taken was pitcher Rob McDonnell, who went to the Los Angeles Dodgers. McDonnell started many of the midweek games for the Illini, and was one of the team’s best right-handed pitchers.

The last Illini player drafted was Drasen Johnson, who was a starter for the team. Johnson was seen as a workhorse, one who pitched roughly seven innings per start and had a few complete games under his belt. The second-team All-Big Ten player had the highlight of his season when he pitched a complete game against Notre Dame in the Champaign Regional.

The Illinois baseball team will be a very different squad next season, as the roster was loaded with seniors this past season. The question is whether or not the non-seniors will leave for the draft.

Blackburn, Adam Walton, Jason Goldstein and Ryan Nagle were the non-seniors drafted. If they leave, Illinois will have just two players from their starting lineup and two pitchers from the starting rotation who saw major time remaining.