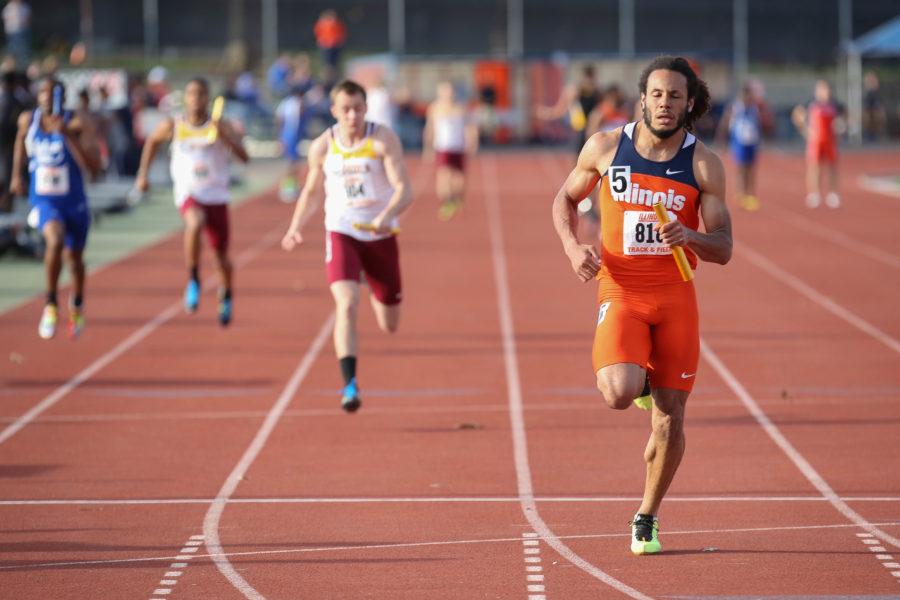 Illinois’ DJ Zhan crosses the finish line to win the 4×100 meter relay during the Illinois Twilight Track and Field meet at Illinois Soccer and Track Stadium on Saturday, April 12, 2014.

The Championships featured some of the best track and field talent from all around the U.S. The tournament could also be an indicator for the American spots at Rio 2016.

There were nine men who competed for the Fighting Illini. Of those nine, four were All-Americans in this past outdoor season.

However, Kendziera did not advance after being only the fifth-fastest runner in his heat.

Brandon Stryganek competed as the final 200m sprinter, finishing 26th with a time of 21.09.

The big story from Illinois, however, was Gia Lewis-Smallwood, who won her third consecutive USATF discus title.

National championship no. 3 was a tough hard earned one. Congrats @giasmallwood #threepeat pic.twitter.com/i5cnEIyYIA

The Champaign, Illinois, native represented the New York Athletic Club and Nike en route to the title. She is the first to ever complete a three-peat since Seilala Sua won four consecutive titles in 1998-2001.

“It’s not easy to win a national title, let alone three-peat,” said event head coach Mike Turk in a press release. “This was a hard earned victory for Gia. Her experience and mental toughness made the difference today.”

There were two Illinois commits who competed in Eugene as well. Jonathan Wells and Dan Lathrop wore Illini colors at the championships.

Stephanie Richartz donned Orange and Blue for the last time at the USATF championships. She finished 14th clearing 4.25m. That ends Richartz career representing Illinois as one of the all-time track and field greats.