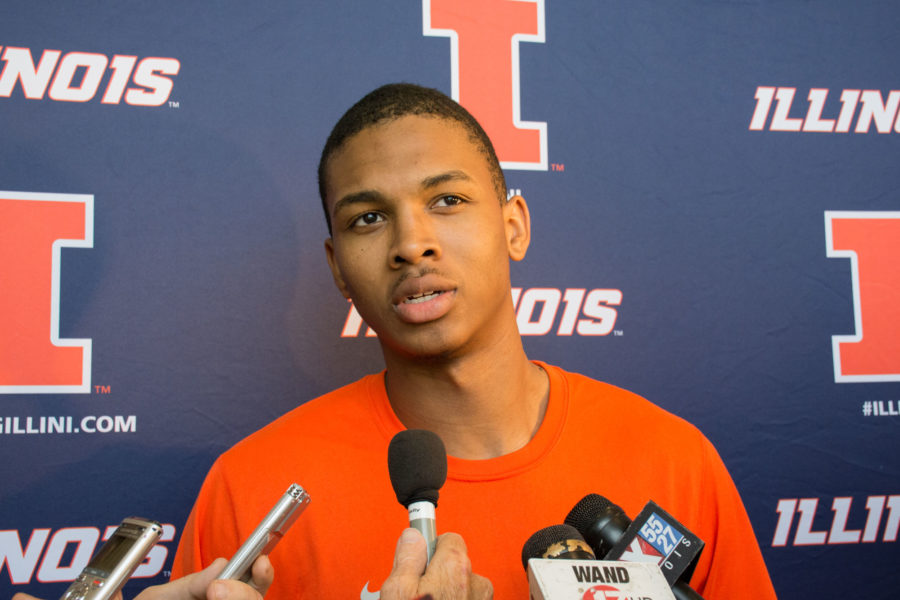 Junior guard Malcolm Hill has been selected to try out for Team USA, the athletic department announced Monday. Team USA will travel to Toronto in July to compete in the 2015 Pan American Games.

Hill is among several players invited to the trials that include other Division-1 basketball players and professional players—one who has played in the NBA and the rest who have played in Europe. He will be alongside some familiar faces in Big Ten opponents Isaac Haas from Purdue, Nigel Hayes from Wisconsin, Romelo Trimble from Maryland and Denzel Valentine from Michigan State.

The Fairview Heights native blossomed in his sophomore season, averaging 14.4 points and 4.8 rebounds a game.

Hill got his chance to shine when then senior guard Rayvonte Rice was injured before a game against Maryland. Hill scored a career high 28 points against No. 11 Maryland.

“When Ray got down after the Maryland game, that’s all the confidence I really needed,” Hill said of his mindset last season.

The scoring ability is what poises Hill to get a chance to represent the U.S. as well as lead Illinois in his junior season

“I think he’s gifted as a scorer. He has the ability to score the ball at all three levels,” Illinois head coach John Groce said.

The USA Basketball Men’s Junior National Committee is selecting the players, which is led by Syracuse head coach Jim Boeheim, among others.

“Coach Few and his staff are going to have a very competitive training camp before we decide on the Pan America Games roster for USA Basketball,” Boeheim said in a press release.

Boeheim and others will narrow down the 22-man roster to 12 for the Pan Am games.

Hill joins sophomore center Chatrice White of the women’s basketball team as the only other Illini basketball player representing the U.S. White will play for the U19 team for the FIBA U19 World Championships in July.

The camp will be held at the U.S. Olympic training center in Colorado Springs from July 7 to 12.

If selected, Hill will play for the team in Toronto from July 21-25.

Team U.S.A. got bronze in the last Pan Am games in Guadalajara, Mexico, behind both Puerto Rico and Mexico.

“He’s come so far in two-plus years, in a lot of different areas,” Groce said. “He’s improved a great deal. Really, really happy for him.”