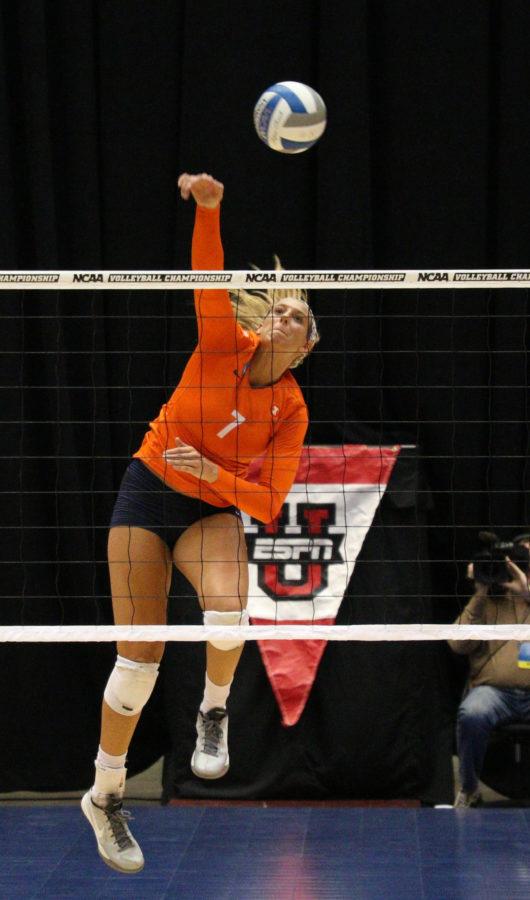 Illinois’ Joceynn Birks (7) goes for an attack during the NCAA Third Round v. Florida at Hilton Coliseum on Friday, Nov. 12, 2014.

“(I arrived) there the first day, and it was super awkward,” Birks said of meeting her teammates. “We didn’t know if we should become friends right away.”

The team eventually meshed together, sharing experiences from their respective teams and schools with one another.

“After our first practice, it was, like, crazy how close everyone got within a three-hour time span,” Birks said.

In addition to playing matches, the team ventured Europe and participated in community work.

The first match was played against the Slovenian national team. Slovenia won the match in four sets. The next day, Birks notched 10 kills to get even with Slovenia.

The team then spent two days facing the Hungarian National Training team. It was swept the first day, but responded with a tie the day after.

Big Ten players noticed the team structures are different in Europe. The Big Ten typically has large players up near the net to block, with smaller players defending in the back. These teams were seen as teams that were shorter and tried to do a little of everything.

The next stop for the team was Croatia, a visit Birks remembers vividly.

“We got to lay out on the beach for a while,” Birks said. ”That was probably my favorite (part of the trip) because we were all swimming in the ocean, and I had never swam in the ocean before.”

The Adriatic Sea is beautiful this time of year #B1GEuroVB pic.twitter.com/cnl8oROoqw

Istra Select, representing Croatia, was the next opponent. The Big Ten squad was victorious in a sweep of the Croatian representatives.

For the last match, the squad took on the Italian National team that had several players from Serie A1, the top volleyball league in Italy.

The team was quite surprised when it noticed there were 3,100 in attendance for the match. The team’s prior matches were a lot less intense. They had consisted of two teams and a gym.

Match attendance tonight is 3,100 for the
#B1GEuroVB vs. Italian National team pic.twitter.com/dFIcWZrgOY

“Not at all what we expected. We didn’t know there would be a huge arena packed with people,” Birks said. “That was actually really awesome.”

Volleyball is a popular sport amongst the Italians. One of the main reasons can be linked to the dominance of the men’s national team during the ’90s.

“The thing that stuck out to me is that their play is a little bit different,” Birks said of Italian teams. “They are really fast, and we obviously weren’t ready for all of that.”

Italian fans sought autographs and pictures with the Big Ten players after the game, despite the Big Ten getting swept.

Eventually, the two-week tour ended and the team came back to home soil on June 25.

“I think just being able to have played matches over the summer, and play with such great players is something that would be good for anyone,” Birks said. “I hope they continue doing it so other girls can be a part of it too.”