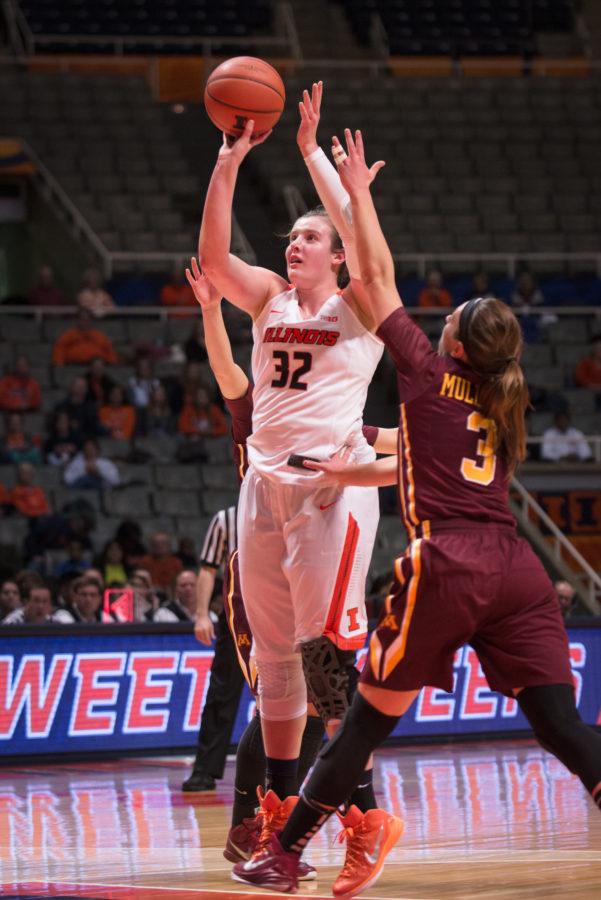 Illinois’ Chatrice White (32) goes for a contested jump shot during the match against Minnesota at the State Farm Center on Thursday, Feb. 5, 2015.

White is playing as a member of the U19 Women’s World Championship Team, representing the United States. She was selected for the team back in May after going through trials at the Olympic Training Center in Colorado Springs, Colorado.

The team features the best young college and high school players from the U.S. Dawn Staley, head coach for South Carolina’s women’s basketball team, is serving as the team’s coach.

“When you’re with U.S.A Basketball, you buy into the culture of what we’re all about,” Staley said in a press conference. “For us, it’s helping each other and having one like mind of doing what we need to do to help us win a gold medal.”

The team started off training for the championships at the Olympic Training Center.

The U19 team also competed against the team that will be traveling to Canada to play in the Pan American games. The Pan American team features some of the best players in women’s basketball at the college level, such as first-team All-American Breanna Stewart from the University of Connecticut.

The United States then traveled to Spain to take part in an exhibition tournament, going up against several other teams that they would see at the World Championships.

White scored eight points against Spain, six of which came near the end of the half.

“It is so much more physical,” White said of international play. “The refs see the games a little differently than in the U.S., which you don’t complain about, you just adapt to. You play how they expect the game to be played.”

The team later traveled to Russia, where the World Championships would begin.

The USA WU19 team is warming up for its @fiba U19 opener against Spain! #usabwu19 #goUSA! https://t.co/aNWWKmIbLI

Its first opponent of the championships was Spain once again. They dished out another impressive performance, defeating the Spaniards again, 72-57.

White went scoreless, but recorded two steals in her 12 minutes of action.

The World Championships will continue in Russia until the championship game on July 25.

White has been blogging about her experience at the World Championships via the Illini Athletics official website.

Another Illini incoming freshman, Jaelyne Kirkpatrick, is competing for Team Canada at the World Championships.