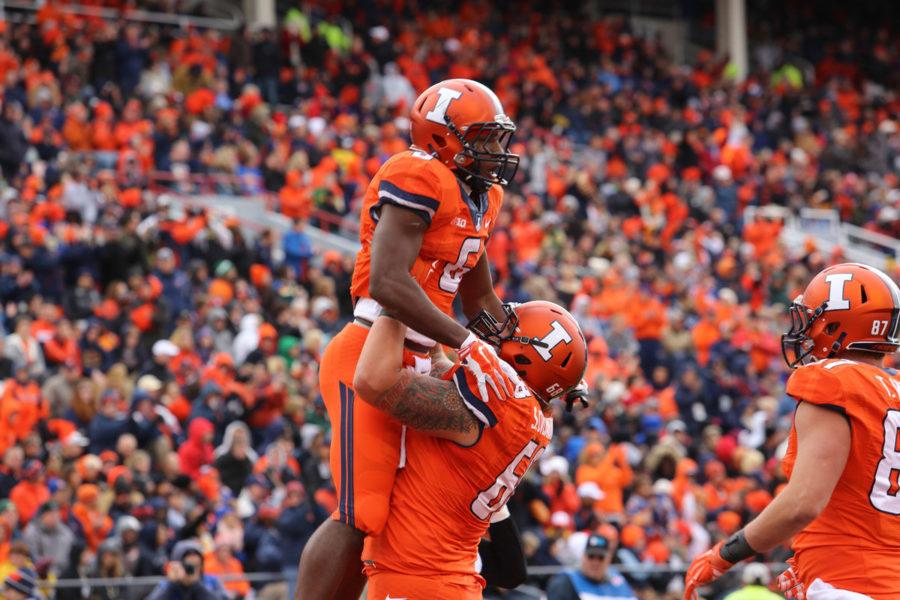 Illinois’ Josh Ferguson (6) celebrates during the game against Purdue at Memorial Stadium on Saturday, Oct. 4, 2014. The Illini lost 38-27.

CHICAGO — At 22 years old, Josh Ferguson is older and wiser than his 18-year-old self.

“He was a little punk,” said Ferguson, referring to his younger self with a laugh. “Nah, he was a cool dude. He was small and fast, naïve. It was a long time ago, it went by fast. I’m just happy I had the people in my life that’ve helped me grow.”

A little wistful, but quickly drawn back to the present at Thursday’s Big Ten Media Days, Ferguson admits he is happy with where he is now.

And the star running back should be.

A senior who redshirted his freshman year because of a hamstring injury, Ferguson has been breaking records and making changes along the way. For him the fifth year was a blessing; a chance at avoiding the senior year that too often sneaks up on unsuspecting college students.

It’s these numbers that give Ferguson the potential to break some Illini records and have put him on a more prominent podiums, like the one at Big Ten Media Days.

Ferguson was also named one of 69 preseason candidates for the 2015 Doak Walker Award, given to the nation’s top college running back.

“Ferg is about as dynamic as a guy as you’re going to get in this league,” offensive lineman Ted Karras said. “He can go up the slot, he can run between the tackles. He’s big. He’s a 200-pound back and he runs like a slot receiver. We run a nice little zone concept and he can cut back at any moment and you may not have your guy all the way, but he’s already passed you.”

This season will see even more of Ferguson than past years. With standout wide receiver Mike Dudek out until at least October and a pass-centered offense in a healthy quarterback West Lunt, Ferguson will be the team’s top playmaker from the get-go. Also, Ferguson’s backfield partner of the last few years, Donovonn Young, has graduated, leaving Ferguson as the only experienced runner in offensive coordinator Bill Cubit’s stable.

Cubit has also taken on the position of running backs coach and that means Ferguson has spent the offseason watching more film than ever.

But Ferguson doesn’t mind more film study and said he’s already learned from this process. But that’s not the only thing he wants to change heading into his final season as an Illini

“I’ve always been a “just watch me and I’ll show by example type of guy,’” Ferguson said. “But actually speaking to guys, developing relationships adds a new (verbal) dynamic.”

Whether that’s catching more balls or coaching the younger guys, Ferguson is ready to be what he calls a “cooperative player and a coach on the field.”

Though he may have been quiet off the field in the past, his teammates have noticed how his performance isn’t always reflected in the national spotlight.

“I think he’s the most underrated player in the Big Ten,” Karras said.

But the records and the attention Ferguson will likely get as he steps into a leading role are a change he seems to be taking with ease.

“It’s different, I really don’t talk that much, especially outside of my 100 teammates,” Ferguson said. “But it’s been good, forced me to come up out of comfort zone and life starts at the end of your comfort zone, so I’ve taken ahold of that.”