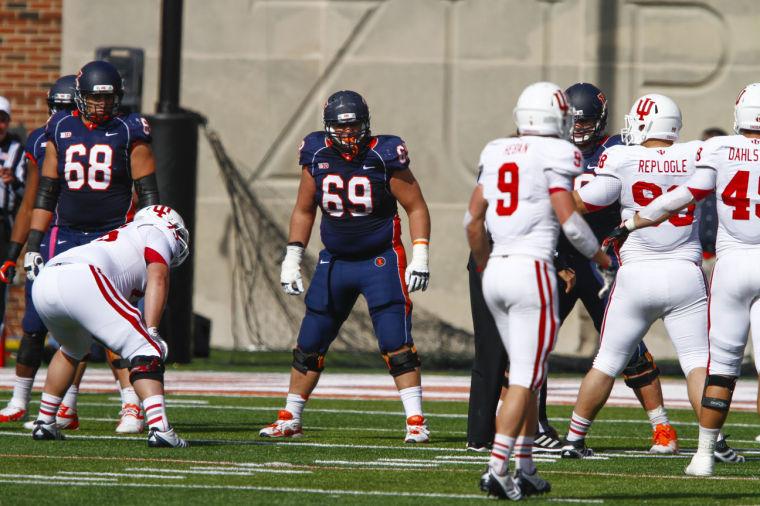 Daryl Quitalig | The Daily Illini Illinois’ Ted Karras (69) looks at the defense during the game against Indiana at Memorial Stadium on Saturday, Oct. 27, 2012.

Ted Karras sat at an elevated table with a smile on his face during the first day of the Big Ten Media Days on Thursday in Chicago. His expression was the opposite when the media and fans last saw Karras at Ohio Stadium in Columbus, Ohio, in early November — the Illinois offensive lineman was limping his way into the locker room.

He tore his ACL that night against the Buckeyes and missed the remaining four games and the spring portion of the year.

Now Karras sat in a suit with his orange and blue tie ready to talk to reporters. The offensive lineman is excited for his senior season and ready to help his team improve after missing the end of last season and a bowl game.

“I feet good as I’ve ever felt entering a season,” Karras said. “I don’t have those 15 practices (during the spring) weighing on me now, it’s an advantage that I have now.”

Karras was shocked when the injury happened. He fell on the ground after the play and did what he always does after a play: He got up quickly. But this time was different. He heard a pop from his knee and thought everything would be fine if he got up like he always did.

Once the lineman got on his feet, he knew something was wrong. For the first time in his career, he knew he couldn’t stay on the field. His coaches were confused and yelled at him when he limped his way to the sidelines but they knew something was wrong once he arrived. The trainers took a look at his knee and said he needed to go to the locker room. Karras obliged but refused to go using crutches — he didn’t want the hostile fans at “The Horseshoe” to yell at him.

The senior wasted little time after being injured — he had surgery right away, and although he said the six-month rehab was challenging, he’s thankful for the support he received from his teammates. He said he wasn’t treated differently because of the injury.

Karras used the time rehabbing to put himself in the best shape of his career. He learned more about his body during the process, something he admitted will be beneficial for the rest of his career and life.

“You make progress every day. It’s painful, but everyone comes back from it, knock on wood,” Karras said as he knocked on his head. “But you’re fine when you come back … It was just interesting to see the technology and everything else that goes into the entire rehab process.”

The goal for his senior season is to win the Big Ten West Division. There’s no clear favorite in the division, according to Karras, and he doesn’t want to focus on winning just a set number of games — for him, the more wins, the better.

Karras also knows that the team’s offensive success will depend heavily on the health of quarterback Wes Lunt. The offensive line returns several players who have seen significant game action and Karras said the group has watched blitz tapes all summer to prepare for any type of defensive attack.

Excitement will once against rush through Karras when he sprints out of the Memorial Stadium tunnel on Sept. 4 against Kent State and begins his final season as an Illini. The offensive lineman said he’ll be ready to protect his quarterback right from the first offensive snap of the season.

“Teddy has done a great job of getting himself prepared,” head coach Tim Beckman said. “I think what a lot of people don’t understand is the commitment and the leadership that Teddy brings to us. Teddy had a lot to do with winning those last two football games that put us in the bowl game. He didn’t play one play, but he had a lot to do with who he is and how he leads this football team.