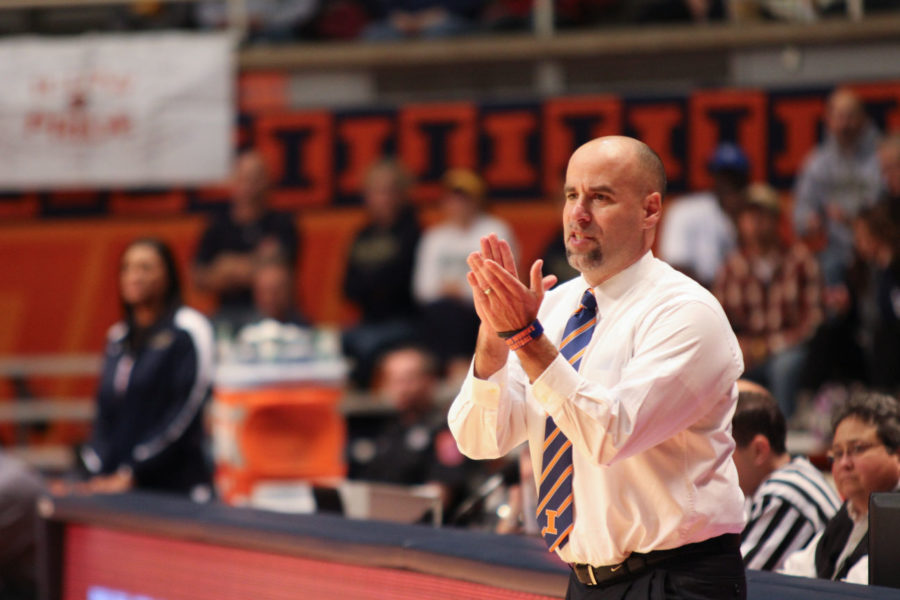 Illinois head coach Matt Bollant applauds his teams performance during the Illini’s 89-37 win over Mariam at Assembly Hall, on Oct. 30, 2012.

And just like that, one of the investigations into the Illinois athletic department is over.

The law firm of Pugh, Jones and Johnson has determined that the allegations of several former women’s basketball players are not supported by evidence, Chancellor Phyllis Wise announced Monday.

The law firm examined a lot of evidence — according to Wise’s statement they examined 18,000 documents, conducted 33 interviews, collected the statements of eight former players and reviewed game and practice footage.

“The report does recommend actions for clarifying expectations regarding coaches’ conduct, better defining the coach-parent relationship and enhancing resources for student-athletes to report concerns or complaints about their experience at Illinois,” Wise said. “We will begin implementing these recommendations immediately.”

The recommendations included suggestions for the women’s basketball program that could also be applied elsewhere.

“We have a number of recommendations as it applies to all 21
sports,” Athletic Director Mike Thomas said. “There is a number of things that are applicable to all of our programs.
We would look at what of those would make sense.”

Wise added that the first priority of the athletic department — internally and externally — is the health and well-being of student-athletes.

Allegations levied by former women’s basketball players and their families were made public in May by The Daily Illini. Shortly after the allegations were made public, the University hired Pugh, Jones and Johnson to complete and independent investigation of head coach Matt Bollant and his former assistant coach Mike Divilbiss.

Those allegations were the basis for a lawsuit filed at the beginning of July. That lawsuit is ongoing.

Bollant has remained the team’s head coach since the former players made their allegations — Divilbiss left the program in May. The Illini start their season in November.

“In the report it talks about (Bollant’s) coaching style; it
certainly does not warrant further personnel action at this time,” Wise said of Bollant’s job security.

The ongoing investigations into the Illinois football program and the women’s basketball sports medicine program have no declared end date, and the lawsuit against the women’s soccer program is still ongoing.

Bollant is expected to make a statement later this week.

“If athletics isn’t excellent, the University cant be
excellent,” Wise said. “We realized it’s important to be the gold standard.”