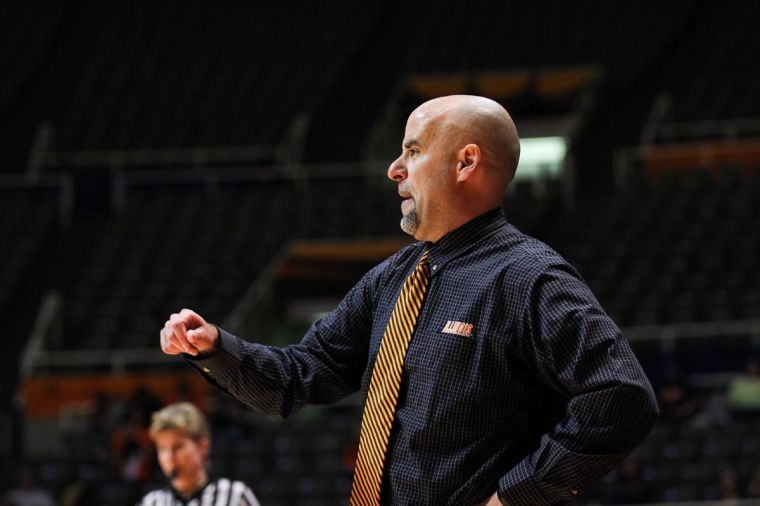 Illinois head coach Matt Bollant instructs his team during the Illini’s win over Wisconsin at Assembly Hall, on Monday, Feb. 18, 2013

Illinois head women’s basketball coach Matt Bollant addressed the media for the first time today since allegations of racial abuse were levied at him back in May.

“I want our program to be a reflection of me.” Illinois head coach Matt Bollant said Wednesday.

In response to the allegations, The University hired Chicago law firm Pugh, Jones and Johnson, to conduct an independent investigation into the women’s basketball program.  The investigation, which released its findings Monday, found no evidence of racial abuse by Bollant and his coaching staff.

After the allegations, a lawsuit was filed by seven former players against Bollant and the University.  That lawsuit is ongoing.

Neither Bollant nor his coaching staff have had contact with the former players since the allegations were made.

All that has happened seemed to blindside many people on the team.

“I need to be more in touch with the girls,” assistant coach Tianna Kirkland said of what she wants to improve. “I need to really have a better feeling for what they’re feeling.”

After reports came out that former associate head coach Mike Divilbiss was at the center of the allegations, he and the University mutually agreed to part ways.

In the report by the Chicago law firm, Bollant and Divilbiss were described as the two head coaches of the team.

Bollant still talks often to Divilbiss — he spoke to him Wednesday morning and is currently helping him look for a new job in coaching. Divilbiss was Bollant’s main assistant coach both at Illinois and at Wisconsin Green-Bay.

Recruiting has not been affected by the storm of allegations, according to Bollant.

“I haven’t brought it up.” Bollant said. “We do have several kids that have read the (reports). Certainly we will point them to the report if they have any questions.”

Many people came out in support of Matt Bollant and the coach said that kind of support was humbling.

The team will leave for France on Monday to travel and play some games against European teams.

“I was thankful the allegations were not supported.” Bollant said. “I was very confident going in that we would see the right things and we did.”