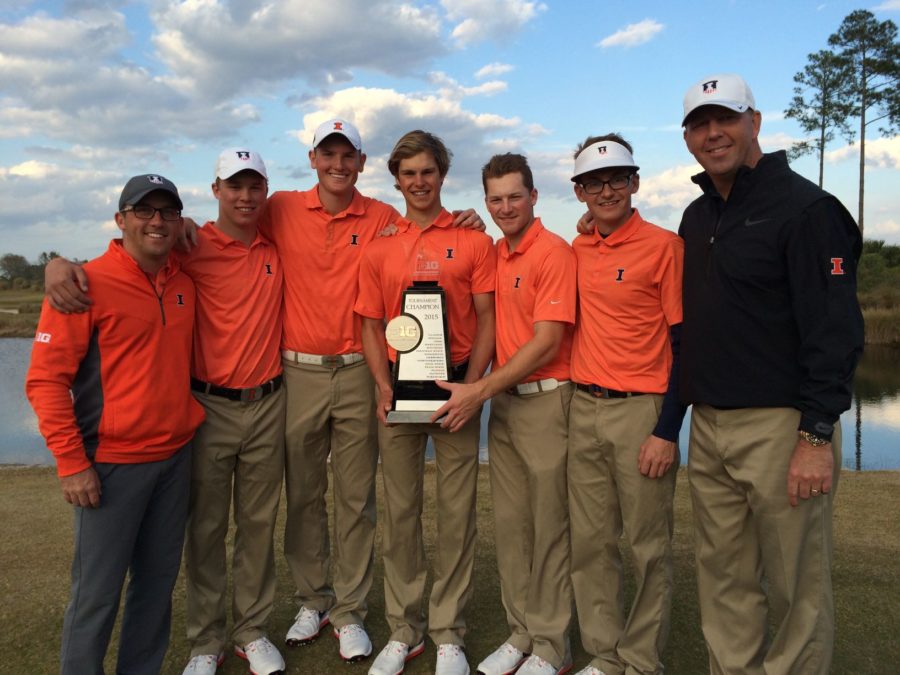 Last year was a season of highlights for Illinois. It became the first Northern team to be voted the No. 1 team in the country, set a school record for victories in a season and made it through to the eight-team match play NCAA finals for the third-straight year.

The team’s postseason was especially remarkable. The Illini turned in a dominating performance at the Big Ten Championships, where they posted one of the lowest scores in conference championship history and won by 32 strokes.

Freshman Nick Hardy was a co-medalist with Iowa’s Carson Schaake as the top individual players in the conference tournament. A few weeks later at the NCAA Noblesville Regional, the Illini tied for the top spot with Southern Methodist to propel them to their eighth-consecutive NCAA championship appearance. Senior Brian Campbell set a course record as he took home the medalist title.

At the NCAA championships, Illinois rallied in the final round to claim a No.1 seed in the eight-team match play finals.  The Illini fell behind early to UCLA in the quarterfinals, and their match came down to the final hole. Hardy sank a key putt on the 18th hole to ensure the team’s victory. Later that afternoon though, Illinois’ season came to an end with a 3-1-1 loss to USC in the Final Four. Junior Thomas Detry claimed the Illini’s lone victory.

So all that this year’s Illinois team is trying to do is follow-up “the greatest season in Illinois golf history.”

The Illini will bring back almost their entire roster from last year. They’ll be without graduated key contributor Campbell, but other players are expected to step up.

Hardy enters his sophomore campaign as a reigning Big Ten medalist coming off of a big postseason performance and a successful summer. Hardy was clutch as a freshman for the Illini in one of the biggest matches of the year against UCLA. A propensity for big moments should only grow during his second year on the team.

He certainly didn’t shy away from big stages this summer, as he finished tied for 52nd at the U.S. Open. Hardy was one of the 60 lowest scorers to advance to the championship rounds out of a field of 156 and more than 100,000 that attempt to qualify for that field.

After playing in his first major, Hardy said he thinks he can win some one day.

“I was excited to play the weekend at a major championship,” Hardy said. “Now that I know what it takes, I can work towards what I need to be.”

Small also made some noise over the summer as he was voted the top college coach in the country by his peers. Small received 49 of 102 first-place votes and appeared on 81 of the 102 ballots. After last year’s defeat, he said he’s excited for the new season.

“We’ve got a great group coming back,” Small said. “They’re just going to get better.”