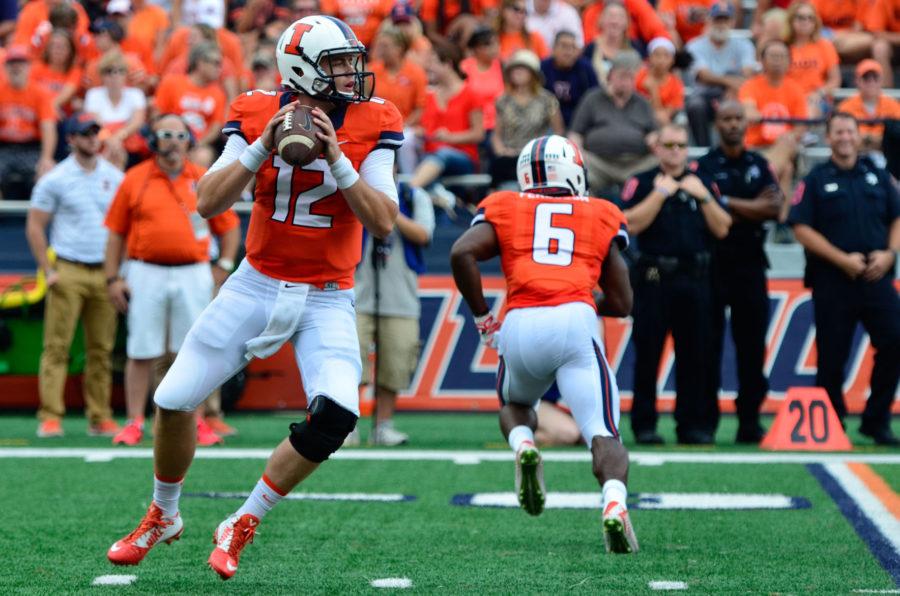 Illinois’ Wes Lunt looks to pass the ball during the game against Texas State at Memorial Stadium on Sept. 20, 2014.

For the Illinois football team, the 2014 preseason was all about who would replace four-year starter Nathan Scheelhaase. Three quarterbacks were in contention: Wes Lunt won the job out of camp, got injured and spent time swapping the top spot with Reilly O’Toole. Aaron Bailey played sparingly.

Flash forward to the 2015 offseason: O’Toole is now a graduate assistant coach and Bailey transferred, leaving Lunt the job. As the 2015 season looms, Lunt seems keyed in as the go-to guy.

The departure of the two other quarterbacks gives more room for Lunt to display his passing capabilities after he spent much of his 2014 season out with injury. But there is also more pressure on him to perform well and remain uninjured with non-experienced players backing him up.

However, it’s a role that head coach Tim Beckman says Lunt is ready to fill. Over the summer, Lunt met with every one of the players on the team for a meeting.

“He wasn’t asked to do it, he just did, whether it was a 10-minute, five minute meeting, Wes Lunt did it,” Beckman said. “That’s the type of young man you’re dealing with when you talk about Wes Lunt. Not just football, but being a leader.”

Before his injury, Lunt started seven games last season and totaled 1,763 passing yards with 15 touchdowns. He averaged 210.4 yards per game in the eight games he played. Lunt finished with the conference’s fourth-best passer rating.

Beckman stated that for now, Lunt will be the starter, but the Illini are open to including back-up quarterbacks in the offense depending upon camp performances.

“You know me, Bill’s (Cubit) done it too, I’ve played two quarterbacks before,” Beckman said. “I think it’s preparation that is hard on defenses, so if Chayce Crouch continues to improve or Jeff George Jr. or Jimmy Fitzgerald, then they’re going to play.”

None of Lunt’s backups have taken a snap in college.

The offensive line protecting Lunt is a bit more experienced than any of Lunt’s backups. Under second-year offensive line coordinator Tom Brattan and a healthy line, the team is hoping to improve its protection. Lunt, a pass-heavy quarterback who doesn’t run often, will need his offensive line to reduce the number of sacks — 23 — it allowed in the 2014 season.

With six juniors and seniors, the offensive line is hoping that its stability and experience will protect Lunt. For the 2015 post-spring depth chart, eight of the twelve offensive lineman redshirted their freshman year. Only one did not and the other three players are junior college transfers who enrolled early.

The opportunity to redshirt is something Ted Karras said was key to his player development and he hopes is something that other freshmen can experience as well. But for now, he said, there is an increased pressure to make sure that the six-foot-five inch quarterback remains untouched.

“We have young guys but young guys who are unproven,” Karras said, referring to the backup quarterbacks. “We had Reilly O’Toole on the sideline waiting (last year). But now we don’t have a guy who has won Big Ten games before waiting if Wes Lunt goes down. And that’s priority number one for this o-line is keep Lunt healthy.”