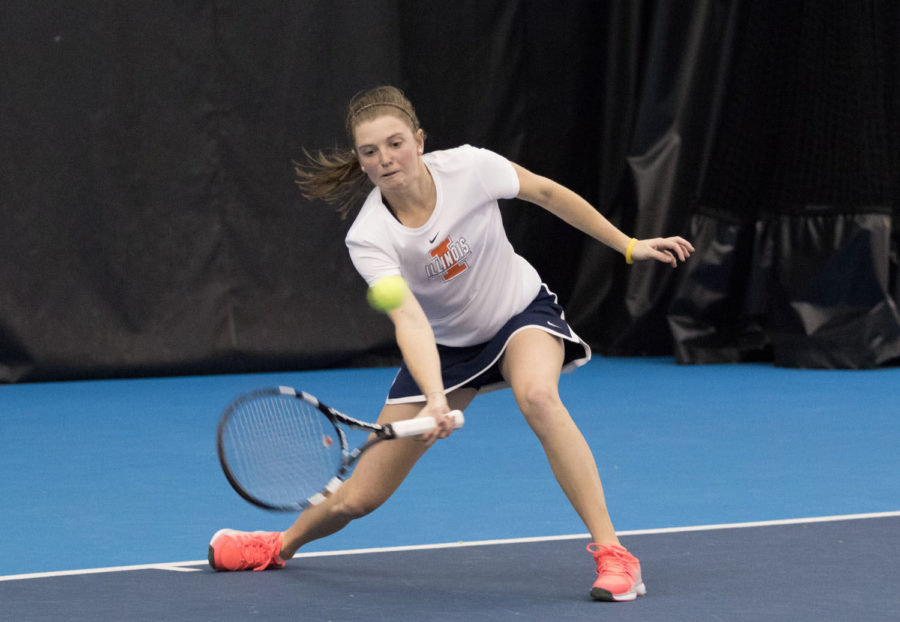 The Illinois women’s tennis team will move forward under new leadership this season.

Not only does it lose former All-American Melissa Kopinski — a team captain last year — to graduation, Michelle Dasso will not be retained as head coach by the University after two consecutive seasons in which the team failed to make the NCAA tournament. The Illini went 14-10 over all and 6-5 in Big Ten play last year.

Assistant coach Evan Clark has been named the team’s interim head coach and he said that the ultimate goal is to get back to NCAA tournament play.

“I believe there is a belief and a mind-set from our group to do much more this year,” Clark said. “There is no doubt in my mind that we have great potential. It’s my job, and our players’ job, to make sure we get the most out of every day to maximize that potential.”

This is not the first time Clark has been the head coach of a collegiate tennis team.

He had a two-year stint as the head coach at the University of North Carolina-Wilmington. He led the team to the program’s first women’s Colonial Athletic Association conference championship and subsequently was named the CAA’s Coach of the Year.

“It’s nice that I was a head coach for two years before coming to Illinois, so I don’t think I have ever changed out of the head coaching mind-set,” Clark said. “It’s also been great to have been here for the spring and summer to see what has not worked and the things that have worked in my short time.”

As for leadership among the players, junior Alexis Casati has been named team captain.

While Casati has earned the label, Clark says he expects the other three juniors — Louise Kwong, Madie Baillon, and Jerricka Boone — along with senior Emily Barretta to provide leadership to the younger girls.

“The balance between our upperclassmen and our underclassmen is a recipe for success,” Clark said. “I’m excited to see what they can do together.”

Kwong expressed gratitude towards Dasso and all that she did for the team and the program, but she said that the team is nevertheless excited for the start of school and the new season.

The junior spent a portion of the summer participating in the World Summer Universiade of the International University Sport Federation games in South Korea representing Team Canada and says that she can take that experience back to the University.

“I got to meet many other college players from around the world and many that also play in the NCAA,” Kwong said. “I had the opportunity to compete against top college players, and I think that will really benefit me.”

Kwong noted that the dynamic of this year’s squad will be different than last year’s with the addition of three freshman players.

Clark said that he is very excited about all three additions to the team and likes what they bring to the table.

“All three have a great level that will translate into success immediately for our program,” Clark said. “They are all very athletic and physical, and we are excited to develop their games further.”