Offseason anything but quiet for Illini men's basketball 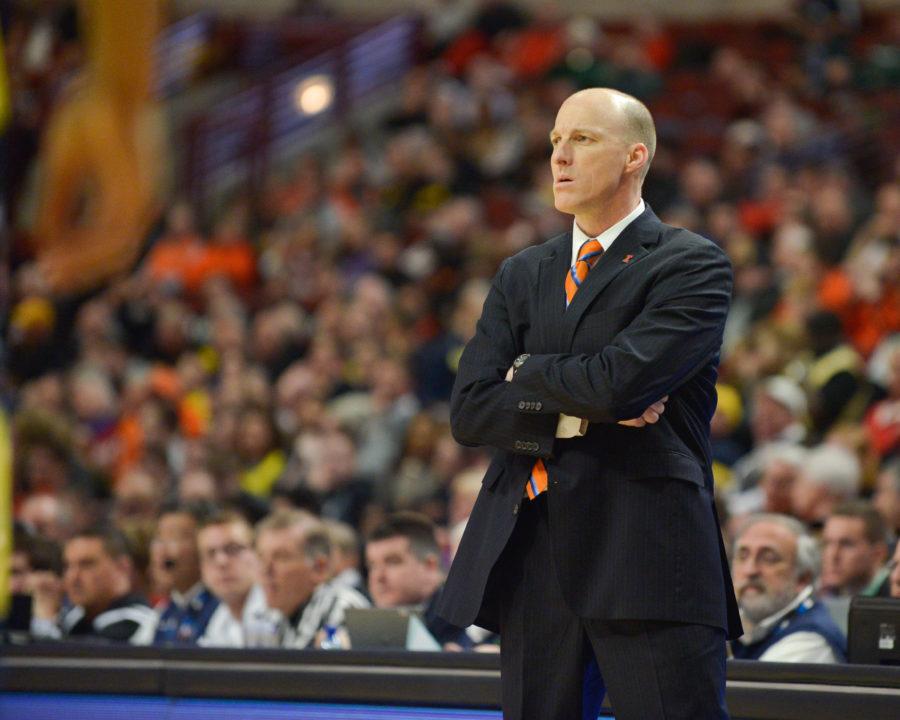 Illinois’ head coach John Groce watches the game against Michigan at United Center in Chicago during the Big Ten Tournament on March 12. Groce hopes to strengthen his team through new players.

If the Illini’s total meltdown at the end of last season made you want to take the summer off from all things Illinois basketball, I don’t blame you. But the start of the 2015-2016 season is just three months away, so it’s time to get caught up on all things Illini hoops.

The biggest summer stories generally come from the recruiting front in college basketball, but it’s been a relatively quiet summer for head coach John Groce in his pursuit of future talent.

A few other things have occupied the headlines.

Groce landed fifth-year transfer center Mike Thorne from Charlotte back in April and was wrapping up another July evaluation period when Tracy Abrams suffered his second season-ending injury in as many years. Abrams’ torn achilles further magnified Groce’s need for point guard depth on a roster that features little, so he snagged fifth-year transfer Khalid Lewis from La Salle at the beginning of August.

Thorne and Lewis will play one season for the Illini, meaning those holes in the lineup will have to be filled again soon. Groce has extended a flurry of offers throughout the summer to 2016 and 2017 targets, even dipping into the 2019 class to get the early jump on La Lumiere point guard Tyger Campbell.

Groce has covered his bases offer-wise, making inroads in a loaded in-state 2017 class. But he has yet to land a commitment in the 2016 class three months from the November signing day. Zach Norvell of Simeon and Charlie Moore of Morgan Park are 2016 Illini targets from Chicago. Moore especially would fill an immediate need at point guard.

“They were on Zach Norvell very early. The (staff) obviously has strong ties to Simeon. Both Zach and Charlie get along, are friends and play together in AAU.

I think those two are clearly the two guys in 2016 that Illinois has zeroed in on, focused on and most definitely have a realistic chance with.”

But before guys like Moore or Norvell possibly play for the Illini, the upcoming season has to be played. And as it stands now, it’s very difficult to know what to expect.

Junior Malcolm Hill has begun to welcome a leadership role as the team’s best player, and while he was discouraged by the loss of Abrams, he felt good at practice in early August.

“I’ve been getting a lot better as a basketball player and as a leader,” Hill said. “As far as team-wise, I think we’re doing really (well). We’re learning, of course, we’ve got new guys, but I think we’re making good progress. It’s going good so far.”

But that was just prior to the team’s 10-day trip to Europe, which featured redshirt-junior forward Darius Paul getting arrested for public intoxication and vandalism. Paul’s arrest — he was sent home early from the trip as a result — marks the second time he has landed in police custody as a member of the Illini.

Groce wasn’t giving Paul a third chance after he’s already coming off a season-long suspension, so the Illini’s projections for this season get that much murkier with an inexperienced frontcourt. Paul’s Illini career is over.

Groce will likely have to rely on freshmen to carry a sizable load, and his top recruit Jalen Coleman-Lands is currently rehabbing a stress fracture in his left leg. He’ll be another question mark heading into a season full of doubts.

It’s a tough spot to be in for Groce, starting down an upcoming season that means so much while knowing so little.