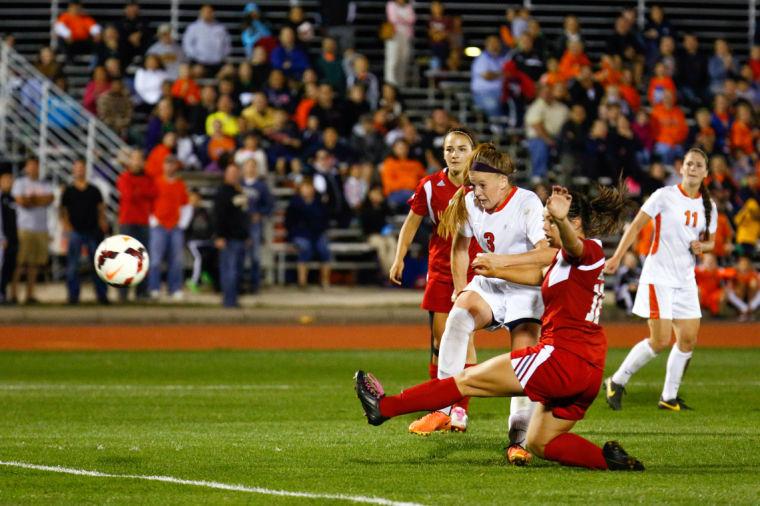 Flaws netted a pair of goals in the Illini’s 4-1
victory against the visiting Oakland Golden Grizzlies of Rochester, Michigan.
The redshirt senior, who now has 45 career goals, surpassed former Illini
midfielder Vanessa DiBernardo (43) for third on the all-time list. Former
forward Tara Hurless is first on the list with 47 goals.

“They were great team goals,” Flaws said. “There were
good things done off the ball that created chances for me. I put them away, but
I wouldn’t have scored them without my teammates’ movement off the ball.”

Just prior to the Illini’s first goal, which was
scored by Flaws, Robishaw spilt two defenders in Illinois territory and made it
all the way to the opposing box before having the ball nicked out of bounds,
resulting in a corner kick for Illinois. Junior defender Hope D’Addario
launched the kick into the box, and Flaws finished off the play with a backward
header.

Robishaw assisted the team’s second goal just over a
minute later when her and Flaws hooked up once again in the box.

Head coach Janet Rayfield brought Robishaw in as a
first-half substitute when she noticed that her team needed to stretch the
field.

“Reagan’s creative and she’s crafty,” Rayfield said. “She
loves to take people on, and they were giving us a situation where there was kind
of an isolation on the flank. She could’ve had one defender in lots of space.
When Reagan sees that, I think her eyes light up. She loves that situation. She
took advantage of it.”

Robishaw’s contribution didn’t end in the first half. She
hooked up with Flaws less than two minutes into the start of the second half. This
time, though, Robishaw netted the goal, and Flaws was credited
with the assist.

Whether it was setting up a goal or scoring one
herself, Robishaw knew that if she could continuously beat defenders on
the wing, then her teammates would have a good chance at putting one in the
back of the net.

That assumption worked out well for Robishaw on Friday night.

“If I can work my butt off to get to the endline, get
that ball across the box to them, then they’re gonna work their butts off to get on
the end of it for me,” she said.

D’Addario scored the Illini’s final goal in the 75th minute off of a free kick that she sent sailing toward Oakland goalkeeper Alison
Holland, who managed to tip the knuckling ball but couldn’t prevent it from slipping into the net.