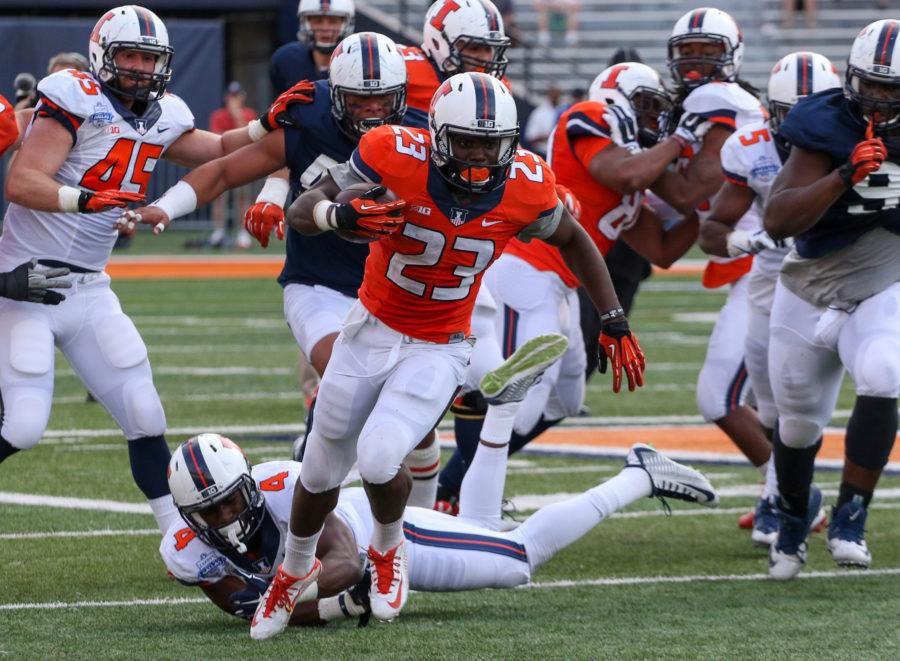 Illinois' Henry Enyenihi (23) runs the ball down field during the annual football Spring Game at Memorial Stadium on Saturday, Apr. 18, 2015. The Orange won 44-41.

On a team with 22 seniors, Illinois football wanted to rely mainly on its experience this season. But with injuries threatening the return of key players, the Illini may have to use its younger options sooner than anticipated.

There are 36 newcomers in all, with 18 freshmen signees, seven junior-college transfers and 12 walk-ons.

Excluding the walk-ons, Illinois has the 47th-best recruiting class in the country according to 247Sports with two four-star recruits: Ke’Shawn Vaughn and Gabe Megginson. The Illini’s class ranks seventh in the Big Ten.

This jump is a vast improvement from last season when the Illini ranked 72nd overall and had no four-star recruits. Illinois had the worst recruiting class in the Big Ten last season.

One of the most important positions that these newcomers could play a role is the quarterback spot. Freshmen Jimmy Fitzgerald and Jeff George Jr. enrolled early to participate in spring practices but redshirt freshman Chayce Crouch is the only backup to see the sideline during an Illini game.

The offense is in very young hands in the event that starting quarterback Wes Lunt goes down to injury.

But, he added, they have shown great improvements and it will just take time and reps to get to that level.

While Illinois will have plenty of new players to fill roles in case of injury in coming years, the team will also rely on redshirt freshmen this season. Offensive lineman and three-star recruit Nick Allegreti will add to the upperclassman-heavy offensive line.

Four-star recruit Megginson is another option if he does not redshirt. Cubit said he is being prepared as if he will play, but hopes he won’t have to.

“Everyone talked about Gabe Megginson coming in,” said offensive lineman Ted Karras. “I guess I was a little worried about what his demeanor was going to be, with him getting so much attention in high school, but he couldn’t have been more humble and ready to work.”

The running back spot is one where a freshman may also see playing time. With injuries leaving freshmen Dre Brown and Reggie Corbin out for the season, Vaughn will be competing with junior transfer Henry Enyenihi for the top spot behind Josh Ferguson.

At the wide receiver spot, sophomore standout Mike Dudek will be out until at least October with a torn ACL and senior Justin Hardee will miss two to three games due to a broken foot. Lunt will have to rely on Ferguson, Geronimo Allison and its freshmen: Sam Mays and Desmond Cain.

But for now the focus is on preparing the young guys with game plans and game situations, a task sometimes difficult for players adjusting to the college program.

“You take the older guys, like Mikey and have him go tell Des how this is going to go,” Cubit said on one strategy used to help freshman adjust. “They think it’s going to naturally work just because I’m a Big Ten football coach. It doesn’t work that way.”