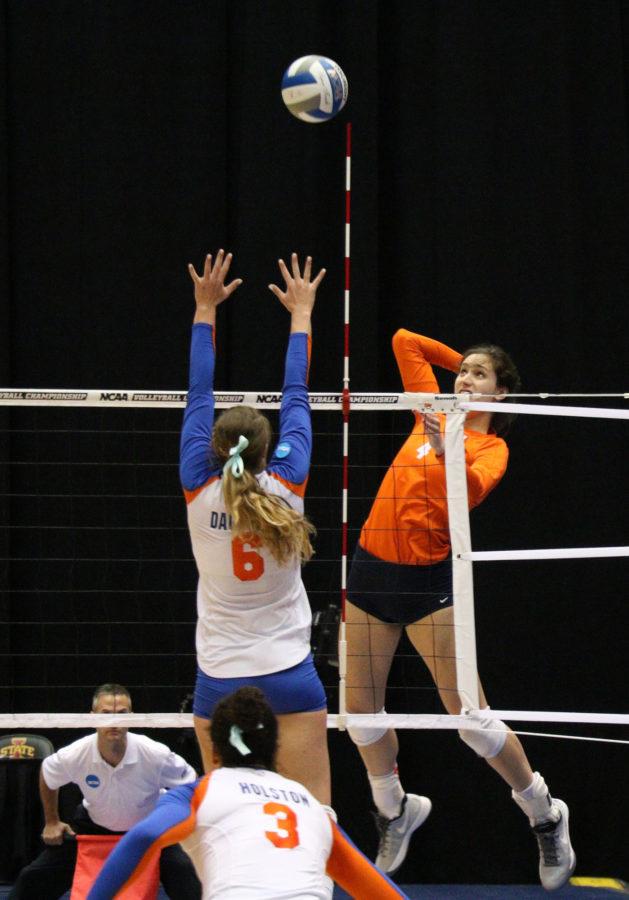 The Illinois volleyball team kicks off its 2015 campaign Friday night with the 10th annual Stuff Huff matchup against Louisville. The 7 p.m. match is the opening match of the weekend long Illini Classic, which will also feature Miami (OH) and Creighton.

Illinois head coach Kevin Hambly has yet to set a starting lineup for his veteran-laden Illini squad, but a few players are guaranteed to see lots of time. Senior outside hitter Jocelynn Birks is a lock and sophomore libero Brandi Donnelly will anchor the team’s stalwart defense.

Birks was a unanimous preseason All-Big 10 selection, and over the summer spent two weeks overseas with the Big Ten Foreign Tour Team. Hambly says her experience in Slovenia, Italy and Croatia helped her learn to communicate with a new group of players, a skill that has helped her form relationships with the three freshmen on this year’s Illinois team.

“I think the thing she was challenged with was learning to communicate with the group, and so I think that’s helped her with the younger players,” Hambly said. “But our culture is the culture that it is. And I think she’s used to operating in that. It’s a very different challenge playing with a group of all-stars than it is playing with your own team.”

Hambly added that Birks’ time overseas allowed her to become more aware of what the game is like across the globe – a glimpse into the professional volleyball world, as Europe is widely considered the strongest continent for the sport.

Last season, Illinois finished third in the Big 10 with a record of 28-6 and fell to Florida in the Sweet 16. Hambly says the team had some good moments, but overall, he was not pleased with the season.

“This group isn’t gonna think it’s a great season unless we do win it,” he said. “The talent’s there, the pieces are there. We need some people to figure out what college volleyball is about and figure out their roles early. Mostly, we just need to come together at the right time.”

Junior transfer Naya Crittenden — who played at Oregon last season — is adamant that the team must remain on the same page to hoist the national championship trophy come mid-December.

“We’ve had a lot of team meetings about our common goal,” she said. “I can just tell that everyone’s in it. We wanna win. I wanna win.”

Junior outside hitter Katie Roustio said Hambly’s high-energy system is integral to the team’s success. She explains that the squad must stay focused throughout the entire season, making sure that every game counts, even low-profile games and matches against less talented opponents.

“We need to make sure we’re playing just as hard in those games, and really coming out with as much energy, treating every game equally.”

There are three freshmen on the Illini roster. According to Hambly and fellow teammates, middle blocker Ali Bastianelli, outside hitter Beth Prince, and setter Jordyn Poulter are adjusting to the college game just fine. Junior outside hitter Michelle Strizak said the squad welcomed the freshmen with open arms.

“I think we all do a very good job of just setting expectations of how hard we work,” Strizak said. “That’s one of the most important things – but also just how we communicate with each other, how we accept each other. Our culture is so strong that we can just absorb any sort of personality and it just fits right in.”