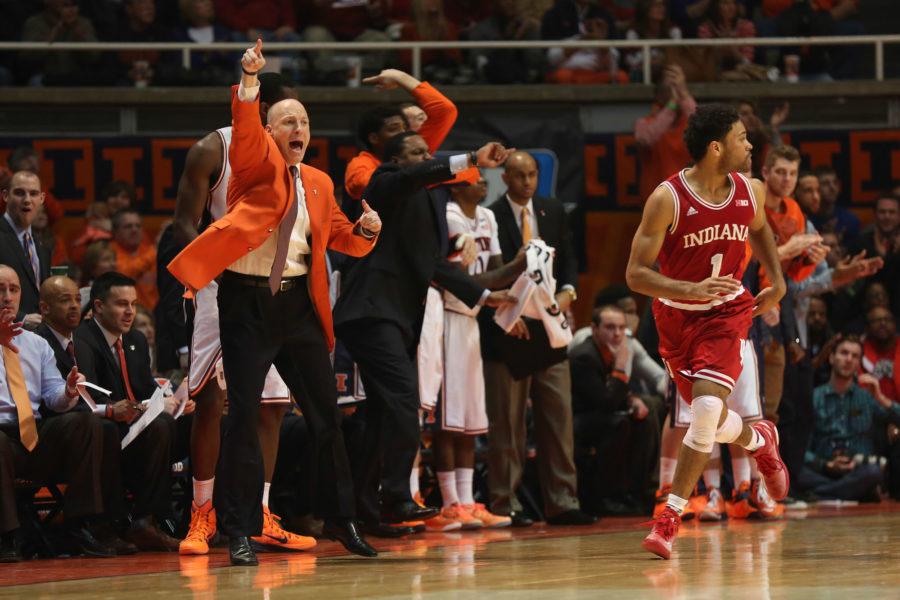 Illinois’ head coach John Groce signals to his team during the game against Indiana at State Farm Center on Jan. 18, 2015. The Illini lost 80-74.

It was nothing short of a turbulent summer for Illinois athletics. While the football and women’s basketball programs handled scandals that grabbed national headlines, the men’s basketball team seemed to fall out of the spotlight following a disappointing season.

But a lot can change in a few weeks.

Fresh off the news that guard Tracy Abrams would miss his second-straight season due to injury without seeing any action, another Illini prospect faced unfortunate circumstances before ever donning a jersey for the Illini.

On Wednesday afternoon, head coach John Groce addressed the media for the first time since deciding to dismiss Darius Paul.

Redshirt junior forward Paul was arrested on charges of vandalism, public intoxication and resisting arrest during Illinois’ 10-day trip to Europe. He was sent home early and promptly dismissed from the team when Groce returned to Champaign.

Paul was suspended all of last season for violating team rules after transferring to Illinois following his freshman year at Western Michigan. During his freshman season, Paul averaged 10.4 points per game on 47 percent shooting for the Broncos and was named the MAC Freshman of the Year. Off-the-court troubles hindered the 6-foot-8 forward’s potential following his transfer, though.

The former Illini issued a statement on Tuesday apologizing to fans, his teammates, and especially his family.

“I put my family through a lot, and I hope they will see a day where I am back making positive decisions that will help my family and not hurt them,” Paul’s statement said.

Groce said he will continue speaking with Paul and his family in order to help the 21-year-old find the right path and that a second chance is certainly not out of the question.

Besides the glaring negative that came from the Europe trip, Groce is excited about the progress the team made throughout the four games and 10 practices overseas. Illinois went 3-1 on the Euro trip, only losing to the Dutch National team. Groce cited the off-the-court cultural experiences as one of the most important parts of the trip, though — the players stood underneath the Eiffel Tower in Paris, France, went to Omaha Beach, visited the cemetery at Normandy, and also stayed in Belgium.

Despite the recent controversies surrounding Illinois, whether they dealt with recruiting snubs, injuries or disciplinary problems, Groce said this may be the closest group he’s experienced, especially after the visit to Europe.

“There’s no question, through this experience, we’re a lot closer as a team,” Groce said. “I think this may be about the closest they’ve been so far.”