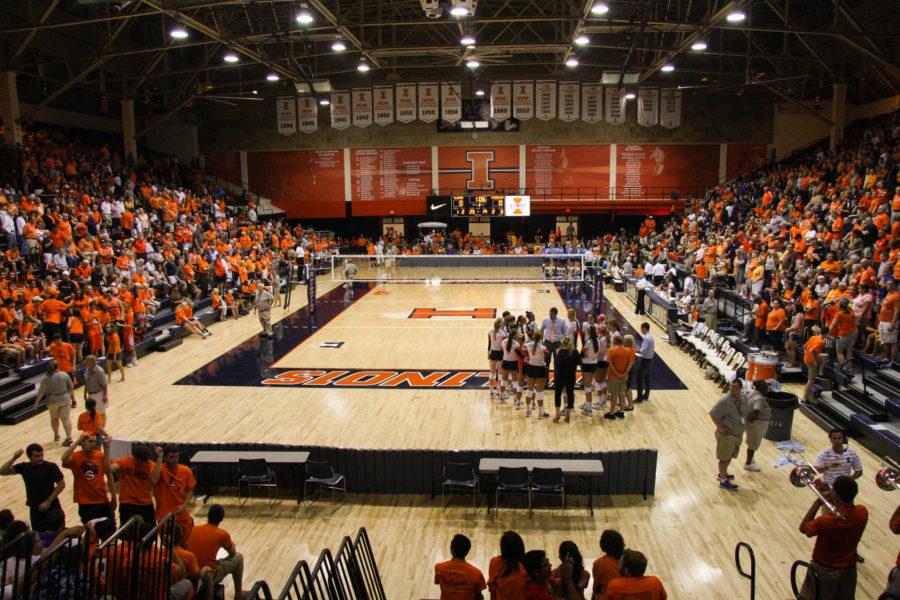 View of Huff Hall during the North Carolina volleyball game at Huff Hall on Saturday, August 30, 2014. The Illini won 3-0.

Illinois volleyball will host the annual Illini Classic this weekend. On-court action begins at 4 p.m. Friday with a matchup between Miami (Ohio) and Creighton.

Stuff Huff festivities kick off at 5:30 p.m. with a carnival outside Huff Hall. But the main event doesn’t get rolling until 7 p.m., when No. 8 Illinois takes on Louisville in the Illini’s first regular season match of the 2015 season.

The Illini went 26-8 and reached the Sweet Sixteen last year, so anything less than a national championship will feel like a disappointment to head coach Kevin Hambly and his team.

Junior Naya Crittenden said throughout preseason that Illinois’ passers practiced getting solid foundations and getting their bodies in front of the ball. Hitters focused on getting good contact.

Crittendon also noted a focal point in the Illini Classic will be the team’s blocking ability. Michelle Strizak echoed her teammate’s statement and thinks Illinois’ defensive prowess will wear down opponents.

“I think that’s how we’re going to be successful this year — frustrating teams all the time,” Strizak said.

After taking on the Cardinals, the Illini don’t have much time to rest, as they have a full slate of volleyball the following day. Illinois plays Miami 10 a.m. Saturday. Hambly’s team gets a brief respite and then face off with Creighton at 7:30 p.m.

Fortunately for the Illini, they’ll get a chance to watch Miami and Creighton play Friday, so they can get a preview of what they’ll be dealing with Saturday.

Miami went 21-10 in 2014, and though the Redhawks are the underdog, the Illini have talked about not taking any opponents lightly.

Illinois’ opponent in its third game of the weekend might pose the biggest threat. Creighton is the favorite to win the Big East as they did last year. The Blue Jays are a scary group — they went 25-9 and swept conference play last season. This year, they return four starters.

But for now, the Illini — led by veterans Jocelynn Birks and Brandi Donnelly — are locked in on Louisville. And the Cards are no easy task.

Louisville head coach Anne Kordes is a former Illinois assistant, and she has a talented bunch. According to Hambly, the Cardinals look even better than last year, when they finished with a 15-14 record.

This past Saturday, a crowd of 1,791 Illini fans got their first glimpse of the 2015 volleyball team at the Orange & Blue scrimmage. Surprisingly, the Orange team of newcomers defeated a veteran-laden Blue squad in a four-set exhibition.

Illinois is so deep this year that Hambly’s biggest headache might come from figuring out the starting lineup. The initial rotation will not necessarily consist of the definitive best players — Hambly will have to toy with combinations and see which players complement each other and gel quickly.

He has until Friday evening to put the puzzle pieces together.