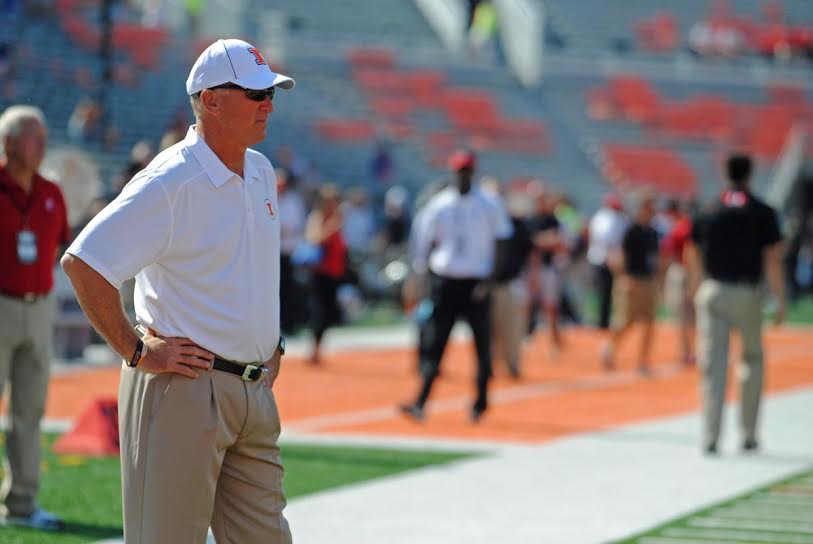 Bill Cubit issued a rallying cry in his first press conference as interim head coach for the Illinois football team. As he spoke to the media, his words were more directed toward Illini nation and the five players standing in the room watching their new coach try to quell a whirlwind of emotions.

His message was clear from the moment he took the lectern to when he was asked about staying past this season.

“I love this place,” Cubit said. “I really do, from when I first got here — I love the people here, I love the student athletes, I love the fans and believe it or not, I love (the media). I just like this place. And when you like something, you can be passionate about it. I have two rules, know what you want and love what you do. I love what I do.”

As Cubit assumes a new role, he’ll be stepping out of his supporting role and into the spotlight of the hot seat. A self-described “mushroom,” when he’s working just on offense, Cubit will have to use these skills and call upon old ones as he takes over the entire team.

At Illinois as offensive coordinator since 2013, Cubit has transformed the Illini offense. In his first year at Illinois, Cubit helped take the offense from 122nd to 71st.

But he has also played head coach twice before. His first stint was at Widener University from 1992-96 and then again from 2005-2012 at Western Michigan.

He was out for morning breakfast with his wife when the call came Friday.

“For me, it was a no brainer to go in there and take it over,” Cubit said. “And that’s what I’m going to do. I love these kids.”

An abrupt halt to the morning was also felt among the players who were informed of the situation only hours before word was officially released. Players at the press conference expressed shock, but also confidence.

“Coach Cubit is a well respected guy on our staff,” linebacker Mason Monheim said. “Guys look up to him because he’s a straight shooter and he demands a lot. As players, that’s what you want, not all the time you might like it but at the end of the day, that’s what you want. You want someone that’s going to bring out the best in you and he does that.”

Cubit said he hadn’t seen the preliminary report that prompted former head coach Tim Beckman’s firing, but the focus — as stated by Athletic Director Mike Thomas and President Timothy Killeen — is on the student athletes.

“Whether it takes 16-80 hours it doesn’t really make a difference,” Cubit said. “When you understand about these student athletes, that they have one shot at this thing, they’re there at the University of Illinois … They play in a great conference and it’s my job and all the other coaches jobs to go out there and give 120 percent because that’s the only way you go about this business and that’s the way we do it in our profession.”

Editor’s note: A previous version of this article incorrectly identified Mason Monheim as a defensive lineman. The article should have stated that Monheim is a linebacker. The Daily Illini regrets the error.