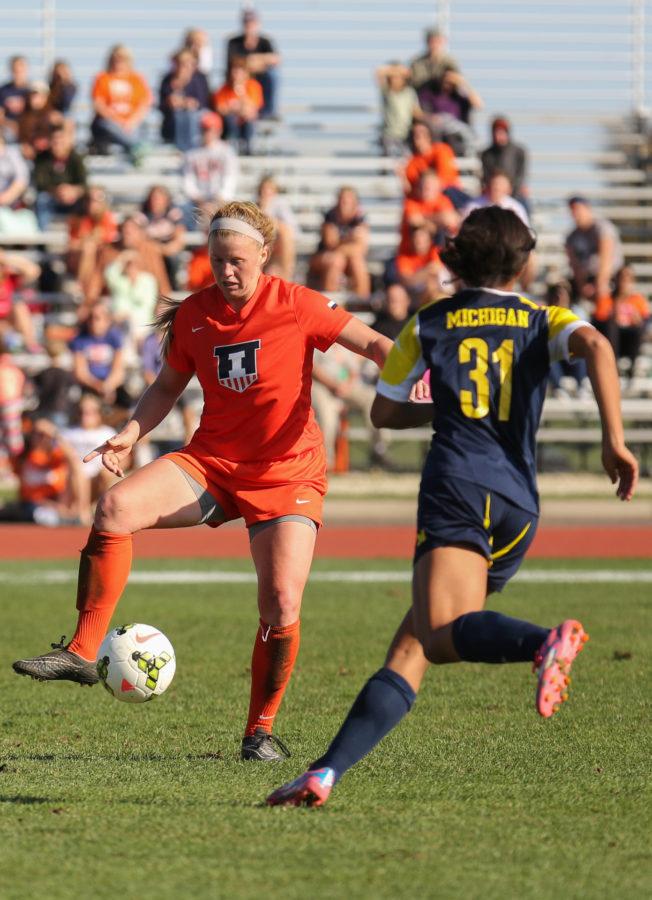 Illinois’ Janelle Flaws (3) looks to bring the ball under control during the game against Michigan at Illinois Track and Soccer stadium on Sunday, Oct. 26, 2014. The Illini lost 2-1.

After a back-and-forth first half, the Illinois soccer team ran away with the second half of play, defeating TCU by a score of 5-2 before 516 at the Illinois Soccer Stadium.

Illinois was aggressive
early on in the first half, notching a goal in the fourth minute on a strike
from roughly 20 yards out by senior Nicole Breece that escaped the reach of TCU
goaltender Courtney Hofer as she dove to her right.

The Horned Frogs picked up their intensity shortly after, responding in the 24th
minute in similar fashion, when forward Emma Heckendorn lobbed
the ball over Illini goalie Claire Wheatley.

TCU’s sideline was
noticeably upbeat, as the goal marked the first of their season.
Illinois quickly broke
the 1-1 tie, however.

In the 28th
minute, Breece started an Illini offensive possession with her signature flip
throw-in. The ball ping ponged around in the box before eventually finding
midfielder

Allison Stucky fifteen feet from the net. The junior struck and
curved the ball into the upper right corner of the net, just over the head of
Hofer, and off the top of the post before finding its way across the line on
the comedown.

Just when it seemed
Illinois secured some momentum, the Horned Frogs stepped up once again.

They kept the script of
the first half going in the 33rd minute, scoring on a close up goal
by junior Michelle Prokof, proving that they should not be overlooked despite
their record.

At the conclusion of the
first half of soccer, both teams looked fairly similar, perhaps identical on
the stat sheet.

Both goalies – Wheatley
and Hofer – allowed two goals and stopped three chances.
The physicality from the
first half carried right into the second, with both teams shoving each other,
trying to break the tie and gain momentum.

Ultimately, it was
Illinois who created some separation.

In the 52nd minute, forward Kara Marbury executed a short pass to defensive midfielder Aliina
Weykamp. She used a long cross from the right side of the field to find
Jannelle Flaws, who was right in front of the net on the left side and kicked
it into the upper left section of the net.

Marbury then shined
herself, getting on the board with her first goal of the season in the 55th minute on a ball assisted by Stucky and junior Hope D’Addario.

Three minutes later (58th
minute), a ball passed by Breece found Flaws fifteen or so yards in front of
the net on the left side of the field. Flaws slowed down and launched a strike
that barely found its way to the upper left corner of the net. The goal was the
4th on the season for Flaws, and tied her with former Illini Tara Hurless for the most goals in the
history of Illinois soccer (47).

Flaws came out via
substitution in the 74th minute, ending her night and making her
wait until Sunday’s match to attempt to break the record.

The Illini stay
undefeated on the season and moved to 3-0.