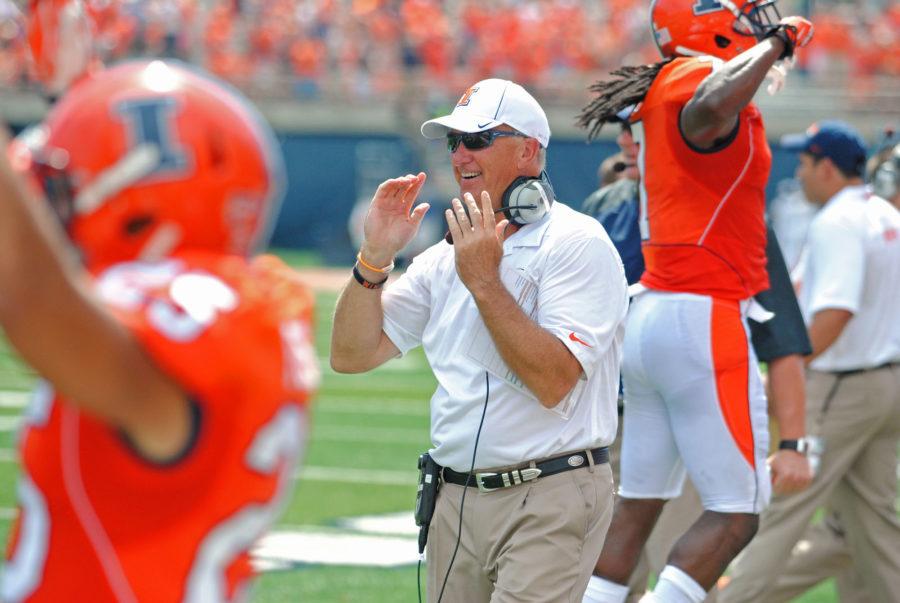 Bill Cubit made sure he set the tone in his first Monday press conference.

The new Illinois head football coach wore an orange dress shirt and a dark blazer with an Illinois shield pin on his left side. Cubit made many in the room laugh with witty remarks — something his predecessor was much criticized for his inability to do.

“I’ve always done it,” Cubit said of wearing a blazer. “I really believe in a professional manner. I get to represent a great university, administration and I want to make sure I present a good image.”

Illinois held practice on Friday and Saturday, and the players performed well, according to Cubit. The coaches ran drills differently, and Cubit explained what he wanted in each drill and why he made the changes.

The players’ reaction to the changes has been mostly positive. Five-year players like offensive lineman Ted Karras and running back Josh Ferguson have gone through coaching changes, and now they need to move on. Freshmen and sophomores have only known one coach and were taken to the side to talk about how coaching changes are commonplace in college football.

Despite the changes, players know they can’t lose focus with their first game at the end of the week.

“Knowing that you have a game in five days (helps us stay focused),” Ferguson said. “It’s been different, a lot more off the field stuff than we’d like to deal with, but we’re focused on still having practices with a game coming up, so it hasn’t been that hard staying focused.”

Cubit mentioned that the past three days have been crazy — he said he has gotten very little sleep and hasn’t eaten much. He received calls from all over the nation from fans who wanted to voice their support of the team.

“You saw a lot of enthusiasm out there,” Cubit said, “I think everyone’s rallying. My hope is that the students, alumni, the parents, everybody out there rally around this football team because these kids deserve everything that they can get.”

Friday’s season-opener against Kent State will be the first to be broadcasted in Mandarin Chinese.

Illinois athletics and the Fighting Illini Radio Network will broadcast every home game at Memorial Stadium in Mandarin Chinese online through FightingIllini.com.

“We’ve had some great success with our international students services group,” said Brad Wurthman, associate athletic director for marketing and fan development. “We wanted to try to do something they were interested in partnering with, so it became a mutually beneficial partnership.”

The University is trying to connect with the over 4,500 students from China. Junior Bruce Lu and sophomore David He will broadcast the games.

“We are excited to launch our Chinese broadcast team as we try to reach out to that community here locally and inform them,” Wurthman said. “We want to be the Big Ten team of Asia.”

Wide receiver Geronimo Allison, STAR Eric Finney, Karras, quarterback Wes Lunt and linebacker Mason Monheim will serve as the team’s captain. Each player noted the honor that comes with being named a captain, especially for the seniors.

“It’s a great honor,” Karras said. “It’s one of the biggest honors I’ve ever received to be voted captain by my team and I will not take that lightly at all.”