Illinois soccer ‘flips the table’ in win over St. Louis 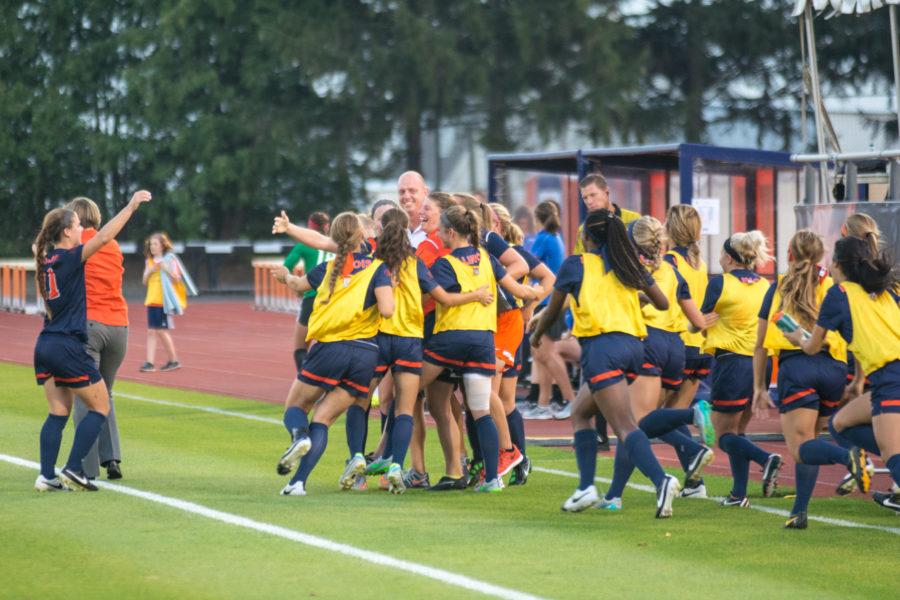 The women's soccer team sprints to embrace Jannelle Flaws after she breaks the Illinois all-time scoring record with her 48th goal in the game against St. Louis on Sunday, August 30.

Not only did Jannelle Flaws’ hat trick performance break the Illinois soccer career goals record, it also helped the Illini (4-0-0) set the tone early in the 3-1 win over St. Louis.

Flaw’s three goals were scored within a span of nine minutes and all before the 25th minute in the first half. Coach Janet Rayfield said it was assuring to see her team jump to a quick lead.

“In other games earlier in the year, we started slow and finished strong,” Rayfield said. “We flipped the table tonight. I loved the way we started.”

Illinois recorded 10 shots on goal in the first half compared to the Billikens’ three.

Despite not scoring in the second half, Illinois registered nine shot attempts. Rayfield would have liked to see the Illini convert on some of those second half chances.

“I just told the team, ‘it’s hard once you take the foot off the gas’, which I think we did at about the 30 minute mark, to get it back and going again,” Rayfield said. “But that first 30 minutes was some great soccer.”

Before the season began, the biggest headline surrounding the Illini was Flaws’ pursuit of the career-goals record. Now, that she has broken the record, the focus can shift back to the team.

During Flaws’ pursuit of the record, Illinois has jumped out to a 4-0-0 start, their best start since 2008. The 2008 team finished 12-9-2 and qualified for the NCAA Tournament — something this year’s team would certainly like to accomplish after missing the tournament last year.

Rayfield believes Flaws’ motivation was always team success and with the record broken, outsiders’ attention will be solely on the team.

“It’s not about the record for her, it’s about the wins, and it’s about this team and this season,” Rayfield said. “I think that’s what we’re going to focus on now.”

Flaws also realizes that her team’s success could very well dictate her playing career after this season.

“I want to get my name out there. I want to play after college,” Flaws said. “Any way I can I want that recognition, but I can’t get it without the team’s success.”

Flaws’ most memorable goal is still to come

After Sunday’s game, Flaws has 50 career goals, and with 14 games remaining on the schedule, her total is more than likely to increase. Even after 50 goals, Flaws can still remember her first, during her redshirt freshman year against Pepperdine.

She said her first season was frustrating since she only scored three goals. However, she knows that first goal was the start of her journey to No. 48.

“I guess it meant something to me, but I was not very fond of that season,” Flaws said of her first goal. “I don’t know if I would say it was a huge (or) proud moment, but it was definitely the start of my goal scoring here.”

While Flaws said she will always remember her record-breaking goal from Sunday, her most memorable goal may have not yet occurred.

“Each goal in each game, they have different moments and different feelings, depending on the game,” Flaws said. “(The goal) definitely will be very memorable, I don’t know which one will be the most. Maybe one later in the season.”