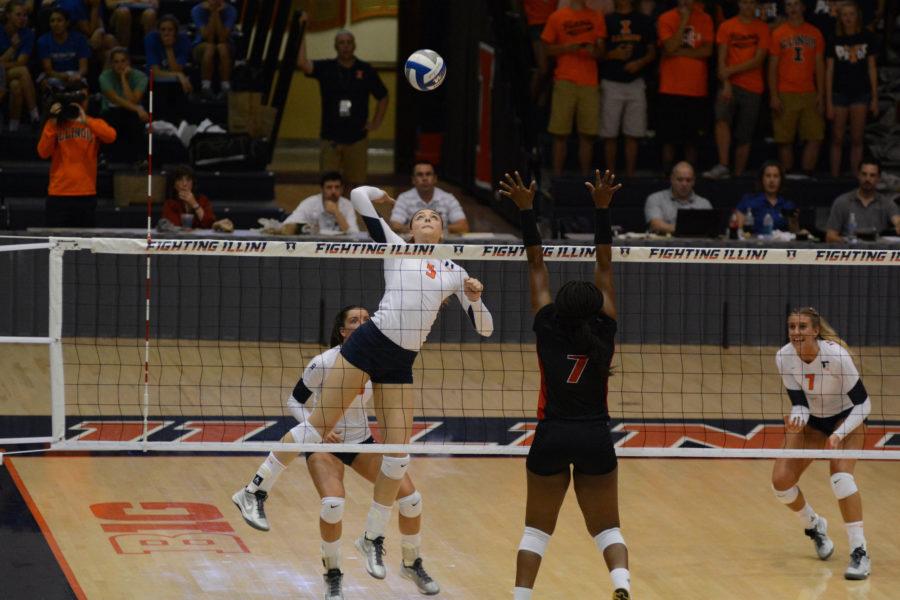 Illinois' Ali Bastianelli (5) attempts to spike the ball during the game vs Louisville at Huff Hall on Friday, Aug. 28, 2015. Illinois won 3-0.

Eight years later, she and fellow freshman middle blocker Ali Bastianelli find themselves in the starting lineup for the No. 6 volleyball team in the country.

Their impact, both positive and negative, was noticeable in the Illini’s season opener. In Friday’s sweep of Louisville, Poulter contributed 35 assists while Bastianelli added three kills and five blocks, giving fans a glimpse of why the pair was so heavily recruited to come to Illinois in the first place.

“I think you try and look at yourself playing situations where you are always succeeding and there were times where I struggled (during the game),” Poulter said. “I had to take a step back and understand my role on the team and where I was at the moment.”

It’s a system and environment that both players have had to get adjusted to, particularly in terms of the speed of play. Hambly is attempting to run a higher tempo offense this season, and the weekend’s errors suggest that everybody still needs time become accustomed with it. The Illini committed 42 errors over the weekend, including 22 against Louisville.

While learning a new system has been a challenge for Bastianelli, she has bought into the expectations Hambly has set for her and the rest of the team. Part of the reason she came to Illinois was because she believed in the kind of culture Hambly is trying to establish amongst the team.

“Going from high school and club to college is a big challenge,” Bastianelli said. “The club team I played for ran a slower tempo. The speed and learning how Kevin wants us to play was my biggest obstacle, but I’m working at it every day.”

According to Hambly, both Bastianelli and Poulter are already showing signs of maturity and a strong level of communication on the court. He attributed their ability to be vocal with their comfort level with the veterans of the team.

Now with their first taste of competition behind them, Bastianelli and Poulter will have to wait another month before they play in the confines of Huff Hall again, but the memories of their first collegiate matches will certainly be unforgettable.

“It was really great playing in Huff for the first time,” Poulter said after the Louisville match. “I was a spectator for such a long time, and finally getting to step on the court and seeing what the atmosphere is like when you are playing was a lot of fun.”