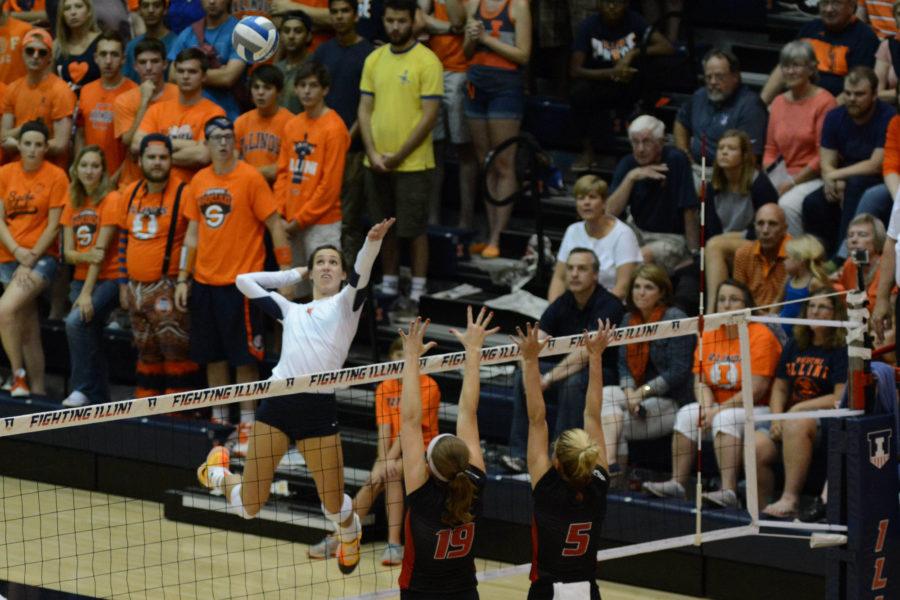 Illinois’ Michelle Strizak (4) attempts to spike the ball during the game versus Louisville at Huff Hall on Friday, August 28, 2015.The Illini won 3-0.

Fresh off finishing first among four schools in the Illini Classic this past weekend, the No. 6 Illinois volleyball team (3-0) will travel to University Park, Pa., to compete in the Big Ten/Pac-12 Challenge.

The Illini’s first test is No. 2 Stanford on Friday. Then, head coach Kevin Hambly’s squad will get a little under 24 hours to rest before taking on No. 21 Colorado on Saturday. The Cardinals made it out of Illinois’ region last year in the NCAA tournament before falling in the semi-finals to eventual champion, Penn State.

While Stanford – who received eight first-place votes in the recent AVCA Coaches’ Poll — presents a huge matchup for the Illini, the squad won’t worry about the Cardinals until arriving in University Park. Hambly said the focus in practice this week has been improving on areas that were vulnerable throughout the Illini Classic — though there haven’t been too many mistakes for the Illini.

“Obviously, playing Stanford is a big match, but it’s more about what can we gain from this experience and how it can be a step toward our goal of being a national champion,” junior outside hitter Michelle Strizak said.

Freshman middle blocker Ali Bastianelli echoed her teammate’s statement and explained that the team is going to treat all of its opponents with the same ferocity.

“There is a lot of pressure, Stanford being No. 2, but at the end of it, it’s just us playing volleyball,” Bastianelli said.

For Bastianelli and the other two freshmen on the roster, the Penn State trip means their first taste of college volleyball on the road. The Big Ten/Pac-12 Challenge is the start of a 12-game away stretch through Oct. 3, with the team leaving campus for the next four weekends.

Playing on the road for so long may seem daunting, but Hambly said there are a lot of positives. In his view, the team bonds better on the road than they do at home. Playing in front of hostile crowds is solid experience for the post-season, and many of the matches are what he calls “dead matches” — neutral sites. He said he hopes the Big Ten fans are more on Illinois’ side this upcoming weekend.

Outside hitter Jocelynn Birks leads the club with 37 kills, and Donnelly anchors the opposite side of the ball with 49 digs. Strizak has played the most efficient volleyball thus far, racking up 33 kills with just three errors.