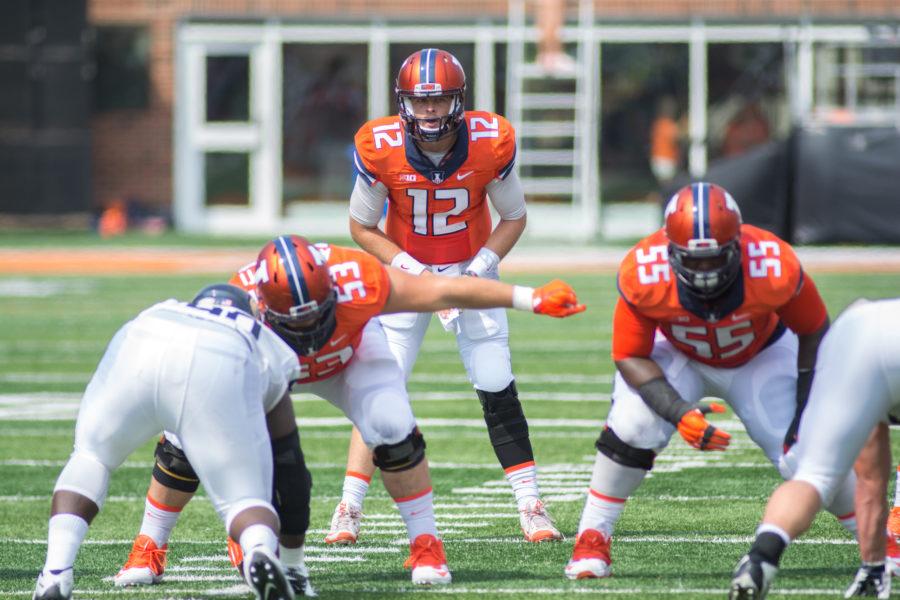 Wes Lunt prepares for a snap during Illinois’ 52-3 victory over Kent State in their season-opener at Memorial Stadium on Saturday, September 5.

Yes, Illini fans, I know you spent three hours waiting for Friday’s Illinois season opener to start. I know you endured the wind and the rain and the lightning. I know you all came out to see the Illini Friday night and didn’t get to.

I was waiting there right along with you, albeit from the press box — that lightning was really impressive up high, let me tell you — and it stunk that the game got suspended to Saturday. I wasn’t hit with a single rain drop, and I was disappointed the game didn’t kick off on Friday, so I can’t imagine how annoyed the soaked masses must have been.

The team didn’t play like it was disappointed in Saturday’s turnout — the Illini came out of the locker room and blasted their way through Kent State and saluted the fans that did come with a line of raised helmets.

The ever-loyal Block I showed up in respectable fashion, enough to do one section of card tricks, but generally speaking, the student body that seemed poised to come out in force on Friday stayed home.

And that’s a real shame. Part of me knows why you didn’t come in droves on Saturday — sorority recruitment, the sting of being spurned by Mother Nature the night before and Labor Day weekend plans kept people away from Memorial Stadium. But I’ll tell you, those of you who stayed away, you missed out on a good one.

Those fans missed out not just on an Illini rout — one of the team’s most dominant games since Ron Zook’s departure — but on perhaps the most important player to come through Champaign in that time. They missed out on Wes Lunt.

He was here last year, and he put up some good number in those nonconference games and lots of people have known for a while that he is a good player, but Saturday he was at his best.

And not many people were there to see it.

Those who were saw him shoot passes all over the field, and loft a couple of beautiful balls up to some receivers that should benefit greatly from his presence this season. He took a few hits, but bounced right up and seemed, for all intents and purposes, like a quarterback that is taking his game to the next level.

Look, I get it, there’s a lot of student apathy about this team. It’s just not a group that a lot of students really care about. And I’m not saying anyone is required to care about it, or about football or even Illini sports in general.

But this kid is good, and might be one of the most talented players this school has seen in a while. He’s got NFL written all over him, and if you miss out on that because the game isn’t at night and because you can’t drag yourself out of bed on Saturday morning — and you’re someone who claims to like football — shame on you.

This isn’t Ohio State, OK? Illinois didn’t win a national championship last year and won’t win one this year, but why is it so cool to not care about the Illini? Again, you don’t have to like them, but at least have an opinion other than “eh.”

I know there are football fans on campus. You’re not hiding from me by going to the bars on Saturday mornings or staying in and playing video games with your friends. I know you’re out there.

So why not come to Memorial Stadium on Saturdays? You don’t have to root for the Illini: You can root against them for all I care.

But it’d be a shame to see someone as talented as Lunt go relatively unappreciated by this fan base, and by this student body. At least marvel at how good he is, even if you don’t like this team.

Rainouts aside, this season isn’t a complete wash for the Illini. Lunt’s pretty good, and if you don’t come watch him this year, you’re missing out.