Illinois loses first match of the year, goes 1-1 on the weekend 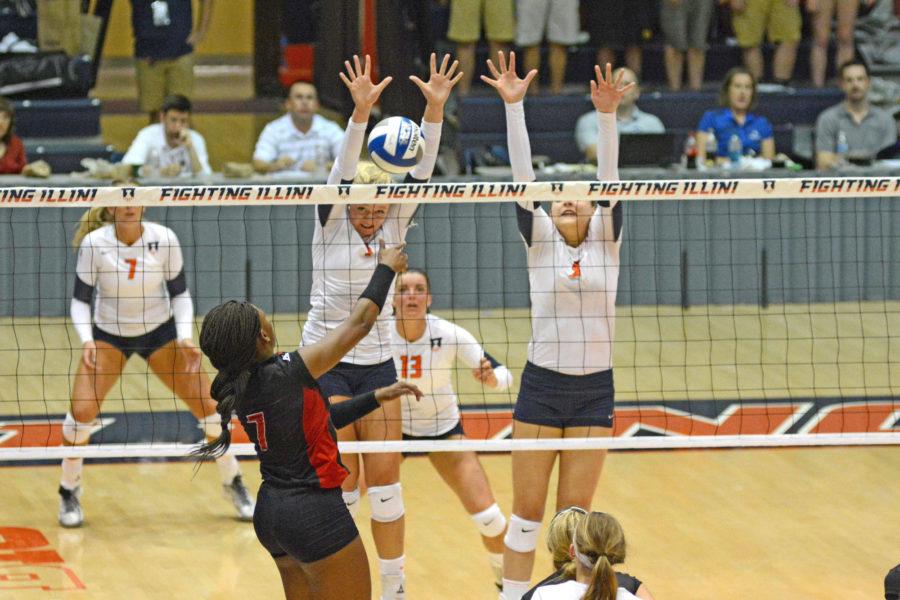 The Illinois volleyball team was two points from going up two sets to none over No. 2 Stanford.

Despite Friday night’s loss, Illinois went on to redeem itself on Saturday with a commanding sweep of No. 21 Colorado (25-13, 25-14, 25-17). The win was the 900th in program history. The two weekend matches in University Park, Pa., were a part of the Big Ten/Pac-12 challenge, which head coach Kevin Hambly looked at as a chance to see where the team needs to continue improving.

“Everything for us including playing in conference is about getting to the tournament,” Hambly said. “So to play a team like Stanford that went to the Final Four last year and is a Final Four contender this year, gives us an opportunity to see what our weaknesses are and what we need to work on for the rest of the season.”

Hambly’s assessment was that his team simply didn’t execute as well as Stanford down the stretch, which made the difference in the last three sets. He said the outcome wasn’t necessarily a result of poor play on the part of Illinois; Stanford was simply the more experienced team.

Senior outside hitter Jocelynn Birks added that the players handled Stanford for parts of the match but had breakdowns in passing and ball control in other parts, and the Cardinal took advantage. The Illini finished the match with 23 errors — five more than their opponent.

Birks said the team played with a lot more energy against Colorado and displayed the type of consistency it will need moving forward in the season. She led the team in kills in both matches with 16 and 15 on Friday and Saturday, respectively.

Middle blocker Katie Stadick added eight blocks and four kills in the Colorado match. She said the team entered the match with a “take care of business” attitude and it paid off on the scoreboard. The team committed only nine errors in the match and outhit the Buffaloes .361 to .103.

The end of the Big Ten/Pac-12 Challenge marked just the beginning of Illinois’ four-weekend stint on the road. Hambly hopes the team can use the time away from Huff to continue to improve and face more challenges like Stanford because that’s the best way to prepare for the national tournament.

“I just like getting in fights,” Hambly said. “If we get in fights, we learn more about ourselves. If we have easy matches, we don’t learn that much. I want to be great at the end of year; I don’t really care as much about our record right now.”