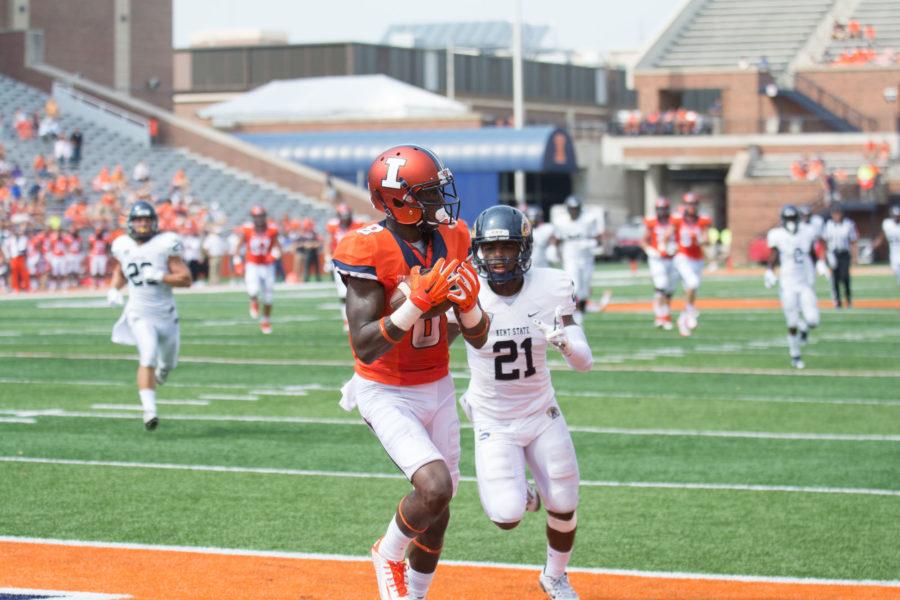 Illinois' Geronimo Allison (8) catches the ball in the end zone for a touchdown during the game against Kent State at Memorial Stadium on Saturday, Sept. 5, 2015. The Illini won 52-3.

Illinois football fans weren’t the only ones struggling to find something to do during Friday’s thunderstorm delay.

Wide receiver Geronimo Allison managed to keep himself busy before the game was finally postponed — after a three-hour delay. Allison put in his headphones and sat at his locker at first, thinking the delay wouldn’t last long. Once his teammates started to take off their pads and cleats and he went outside to check the weather, the wide receiver realized the delay might not end quickly.

Allison ate peanut butter and jelly sandwiches, drank fluids and rode on the bike to make sure his body was ready. He also made sure his teammates were ready. The wide receiver walked around the locker room and threw a football at every player he saw — in his mind, if a player was ready to catch the ball, they would be focused to start a football game.

“I was just messing with people and trying to keep them light and ready,” Allison said.

Other players had different stories of how they spent the delay but they all spent the night at a hotel after the game was postponed to Saturday. Certain players were paired with specific teammates. Freshman running back Ke’Shawn Vaughn roomed with wide receiver Mike Dudek, a breakout star in his freshman season.

Head coach Bill Cubit and his staff wanted Vaughn — and the team — to stay focused after all the hype that was built around the start of the season.

“The coaches didn’t want us to be distracted,” defensive end Jihad Ward said. “We did what we had to do. We stayed in the hotel and did the same thing that we did last night, and we did a hell of a job doing it.”

Illinois’ performance hardly suffered in the school’s first postponed game. The defense forced a three-and-out on the opening drive, and the offense scored on its first two drives. Players looked energized right from the beginning, like they were playing Friday without any delay.

“There was a lot of adversity there, which is good. Our kids had to go through a lot of changes,” Cubit said. “They kept their focus … the kids came out and I thought they were ready to play.”

Illinois’ coaching staff listed Ward as probable for the season opener against Kent State on Wednesday night — Ward was expected to miss the first two games of the season after having surgery on his knee in the middle of August. Cubit explained Ward’s quick return by calling the defensive end a “physical specimen.”

“It was a surprise to us,” Ward said. “It was my decision whether I wanted to play … I just had to get a feeling on the field.”

The defensive end played only the first half of Saturday’s game because Illinois led 38-0 at the half. He had three tackles — two solo and one combined and said he felt 100 percent after the game.

Although Cubit didn’t pay close attention to Ward’s play, he could tell that the senior looked healthy.

“He looked as good as I’ve seen him,” Cubit said. “He looked tough, physical and very fast.”

Students might be surprised at who will be selling football tickets on Green St. on Thursday. Cubit will be at the booth in the middle of the day, after patrolling the Quad last week.

The head coach has made efforts to reenergize student’s interest with the team after an offseason of off-the-field chaos. Before Saturday’s game, Cubit had the players line up shoulder-to-shoulder and raise their helmets to salute the fans who came to the game.

“We just have to keep on being positive, keep on attracting a new fan base and recover the old fan base,” Cubit said. “If we can do that, we’ll be back where everyone wants it to be.”