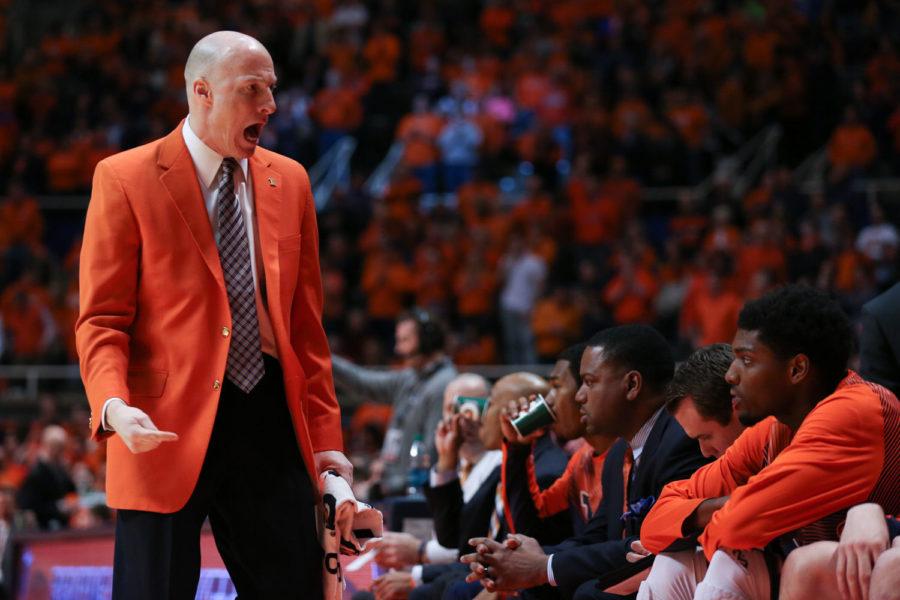 Illinois’ head coach John Groce talks to his team before the game against Nebraska at State Farm Center, on Wednesday, March 5, 2015. The Illini won 69-57.

Xavier Simpson, the No. 66 player in ESPN’s Top 100 in the
class of 2016, has committed to Michigan over Illinois.

The 5-foot-11, 170 pound Simpson chose Michigan over
Illinois, Miami, Wisconsin and Iowa State. He announced the decision Wednesday afternoon
at his high school in Lima, Ohio.

Simpson took official visits to Iowa State, Illinois and
Wisconsin in the days leading up to his decision and ultimately chose the Wolverines. His decision marks the latest blow for Groce’s recruiting efforts,
which have left some Illini fans disillusioned after three years of near-misses
on point guard recruits.

As of today, junior Jaylon Tate is the only true point guard
on scholarship for Illinois past the upcoming season.

Groce still has point guard recruits in play in the 2016
class, most notably Charlie Moore out of Chicago. Moore took an unofficial
visit to Illinois on Friday and has an official visit scheduled for Sept. 25.

Groce currently has no commitments in the 2016 class. Te’jon Lucas will be visiting Illinois on Sept. 17-18.