No. 7 Illini prepare for Shocker Classic 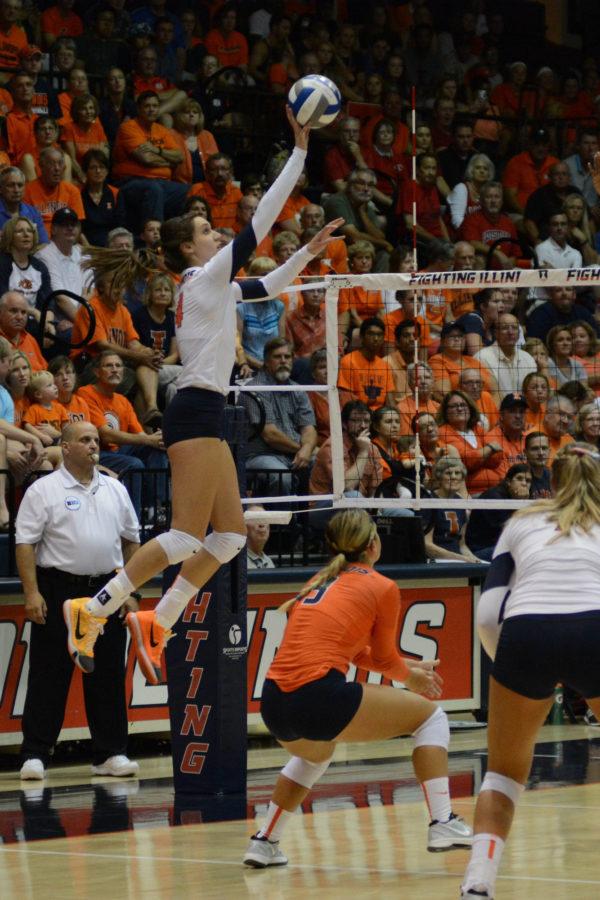 Illinois’ Michelle Strizak (4) attempts to dink the ball during the game versus Louisville at Huff Hall on Friday, August 28, 2015.The Illini won 3-0.

The No. 7 Illinois volleyball team (4-1) travels to Wichita, Kansas this weekend to play in the Shocker Volleyball Classic. The Illini will face No. 21 Kentucky (4-3) Friday at 1 p.m. before Saturday’s double-header against South Dakota State (1-8) and Wichita State (4-3) at 11 a.m. and 8 p.m., respectively.

Head coach Kevin Hambly’s squad is coming off a 1-1 split at the Big Ten/Pac 12 challenge this past weekend in University Park, Pennsylvania. Illinois won the first set against No. 3 Stanford on Friday night before falling 3-1. The Illini bounced back Saturday with a 3-0 victory over No. 23 Colorado.

Illinois’ lone loss of the season was due to late-game errors. In the final three tight-knit sets against Stanford, the Illini tensed up and placed errant balls.

“We need to slow it down when it matters,” Hambly said. “There was anxiousness instead of trying to make plays.”

“The older players … they don’t do that,” he said.

“We kind of got stiff at the end of games against Stanford, but against Colorado we stayed loose and we stayed confident,” she said. “We learned from Stanford that we need to be relentless the whole time.”

Strizak said the team is focusing on defense in practice this week. Hambly noted the Illini are also keying in on fixing their ball control, digging balls in seams and serving more aggressively.

“We have a pretty good foundation, we’re pretty experienced, but we just have to keep building and keep striving,” Strizak said.

The Wildcats will pose the biggest threat to the Illini over the weekend. Senior setter Morgan Bergren (126 assists on the season) and sophomore middle blocker Kaz Brown (43 kills, .411 hitting percentage on the season) are a scary duo, and the highly ranked Illini cannot take them lightly.

As Hambly has said again and again throughout the young season, the team is preoccupied solely on what it can do better. The Illini will not watch film of their opponents until they arrive in Wichita. Instead, they’re worried about perfecting their own high-tempo system, which has been a success through five matches. Strizak, freshman setter Jordyn Poulter and senior outside hitter Jocelynn Birks are slowly but surely building a chemistry that they hope will take this team far into the postseason.

The backups are more than capable as well, and there’s a competitive atmosphere in practice, which bodes well for the Illini when they have to face Big Ten opponents. According to Birks, no starting position is completely safe — players are still fighting for spots. Strizak and junior outside hitter Katie Roustio push each other to become better daily.

“I think it’s definitely to our advantage to have competition,” Strizak said. “We both strive in competitive environments; otherwise, we wouldn’t be here right now.”