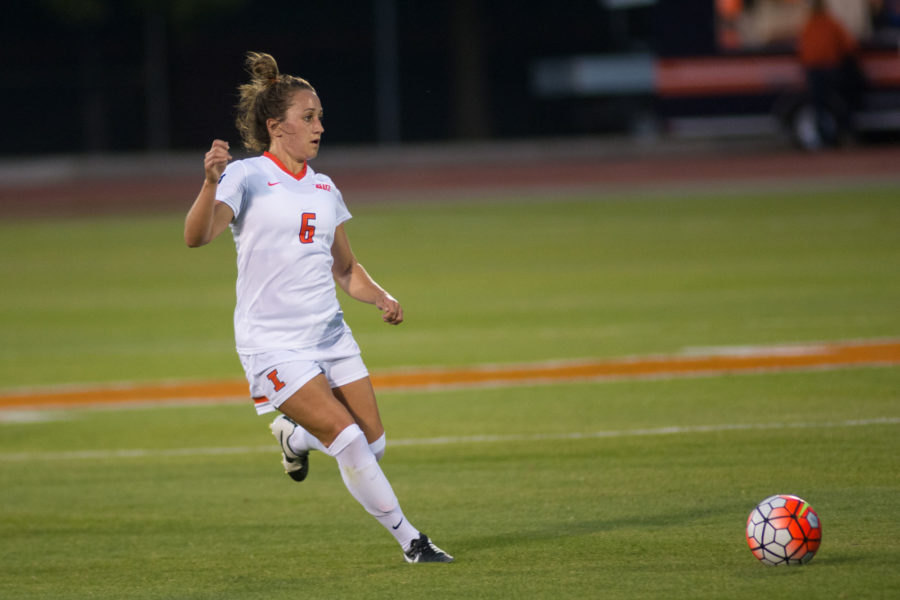 Reagan Robishaw making a pass during Friday’s win over TCU.

While the Illinois soccer team (5-1-0) scrimmaged and practiced free kicks during Wednesday’s practice to prepare for Friday’s match against Northern Kentucky (4-0-0), midfielder Reagan Robishaw limped around the sidelines and into the team huddles with a bulky brace on her leg.

The senior will undergo an MRI on what appears to be a torn ACL in her left knee, according to head coach Janet Rayfield. The injury occurred in Friday’s match against Washington.

In five games, Robishaw tallied two assists, two goals and played 250 minutes. With Robishaw definitely out for Friday’s game, and possibly for the season, Illinois will need to find someone to replace her attacking role.

Rayfield knows that will not be an easy task.

“Similar to any injury, one person doesn’t replace that,” Rayfield said. “You don’t just pull out a piece and put someone else in that piece because they’re just not the same, they don’t have the same attributes and qualities.”

Regardless, Illinois still needs to put out a starting 11. Rayfield hinted that possible replacements for Robishaw might be freshmen Katie Murray and Lauren Ciesla, sophomore Emily Osoba and redshirt junior Tailor Smith.

The Illini will certainly miss Robishaw’s offensive production as well as the leadership role she filled on the field. Rayfield expects midfielder Allison Stucky to step up to the challenge.

Stucky said she realizes the absence of Robishaw will have an impact on the team, but is confident she can help the team bounce back.

“Being a junior, you just take on a whole new leadership (role),” Stucky said. “This year me playing so much and being in the midfield you have to have a voice in order to organize everyone around you and I can run for days so I kind of always lift everyone up.”

Illinois will have to rely on Stucky’s speed and attacking prowess this weekend. But due to Northern Kentucky’s lack of video streaming, the Illini do not have an advanced scouting report on the Norse’s strengths and weaknesses. One thing for sure is that the Norse have showed they can be a high-powered offense — they have outscored their opponents 14-1.

The injury to Robishaw couldn’t of come for a worse time for a team that continuously credited its success to cohesiveness and chemistry during this early part of the season. Illinois experienced its first hiccup on offense this year in last week’s respective matches against Washington and Portland. The Illini combined for two goals and lost its first game of the season to the Huskies.

Stucky, though, is hopeful that the team can mesh quickly if Robishaw ends up to be out for an extensive amount of time.

“This is such an awesome team,” Stucky said. “We have so many returning players, but we also have a 100 times more chemistry than last year. It’s fun to be at practices, it’s fun to play in games, it’s just fun to play with each other. We’re not completely on the same page yet, but we will be.”