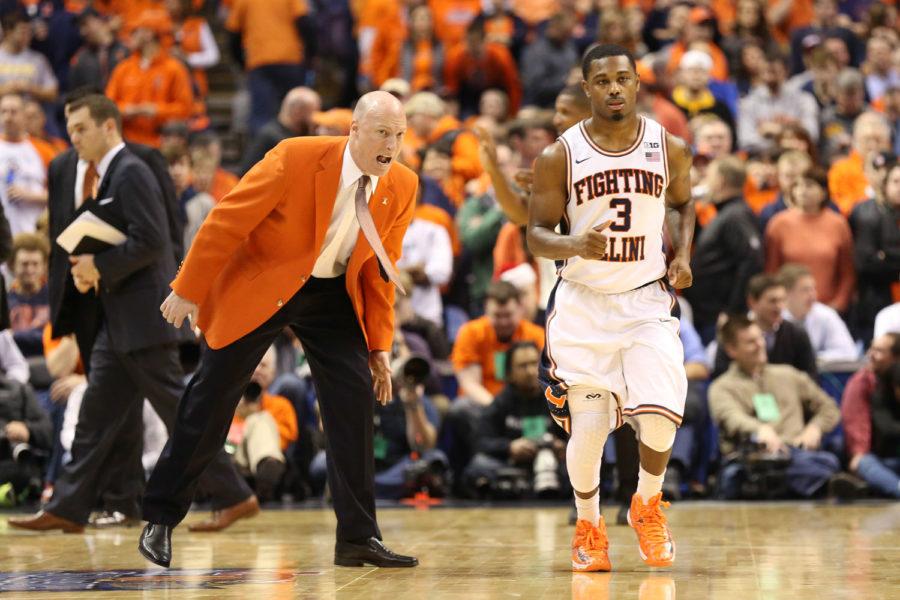 Illinois' head coach John Groce instructs Ahmad Starks (3) after a timeout during the game against Missouri at Scottrade Center in St. Louis, Missouri on Dec.20, 2014. The Illini won 62-59.

Maybe I should save myself some time.

You see, when a high-profile Illinois basketball recruit sets a date and time to announce his college decision, I have to be prepared. I’ll write two stories in advance of the announcement — one will say the recruit picked the Illini, the other will say he chose to play elsewhere — so that The Daily Illini can post a recap of the decision online immediately after the recruit’s choice is announced.

This is standard practice in sports writing; same goes for media who cover elections, award shows and so on. I’ve performed this ritual five times since I started covering Illini basketball recruiting last fall (for Jalen Brunson, Jawun Evans, Elijah Thomas, Carlton Bragg and most recently, Xavier Simpson), and all five times, the “insert recruit name here” spurns Illinois version is the one that’s gone live.

Each time I’ve typed the pro-Illinois version, I’ve wondered if it will ever reach the eyes of anyone beyond myself and my editors. And by the time I usually draft these parallel universe scenarios, the writing is pretty much on the wall that said recruit probably isn’t going to pick the Illini.

I could save myself 10 minutes by not writing the Illini version at all.

I’m kidding, of course. As Wednesday’s Xavier Simpson announcement showed us, anything can happen in the world of recruiting. A recruit can even choose a school that wasn’t even on his list of possible destinations as of a couple of days ago, like Simpson did when he chose Michigan.

I’m sure the fans and coaching staffs of Iowa State, Illinois and Wisconsin felt more than a little miffed when they heard the decision. These schools spent time and resources recruiting Simpson (especially Illinois, not so much Wisconsin) and in swoops Michigan in the 11th hour to wrap Simpson in Maize and Blue.

We all know Illinois fans are frustrated at losing out on yet another prospect. It’s not that Illinois should have been a no-brainer for Simpson; Michigan, Wisconsin and Iowa State have all had much better recent track records of success on the court. The Illini aren’t entitled to anyone right now.

The last time an Illini recruit picked Illinois at one of these highly-publicized decisions was when Quentin Snider took the podium in 2013, only to de-commit soon after.

At this point, I’m sure fans prefer the surprise commitment, like we saw last year from Jalen Coleman-Lands.

The good news for Groce and Illini fans is that there are still some targets out there who can fill Illinois’ 2016 class, especially their point guard needs. Charlie Moore out of Chicago is No. 1 on the wish list, and Te’Jon Lucas from Milwaukee is an option as well.

According to Scout’s Derek Piper, Illinois had in-home visits with both Moore and Lucas Wednesday, which is no surprise. Groce knows he can’t whiff entirely at the point guard position in the 2016 class. Lucas is also scheduled to take an official visit to Illinois the weekend of Sept. 18, with Moore slated to visit the weekend after that.

I wrote last week how Groce had to ensure that his 2016 class wouldn’t be a repeat of the events of last fall. That was when neither the Brunson nor Evans recruitments went Illinois’ way, leaving the Illini without a true point guard in the 2015 class.

Simpson’s now off the board, but Groce has the chance to make Illini fans forget all about Simpson if he lands the similarly-ranked Moore. The fan base’s collective groan should at least subside if Groce gets Lucas, a three-star recruit.

Wednesday probably made Illini fans feel like they’ve seen this movie before. But Groce can still re-write the script.