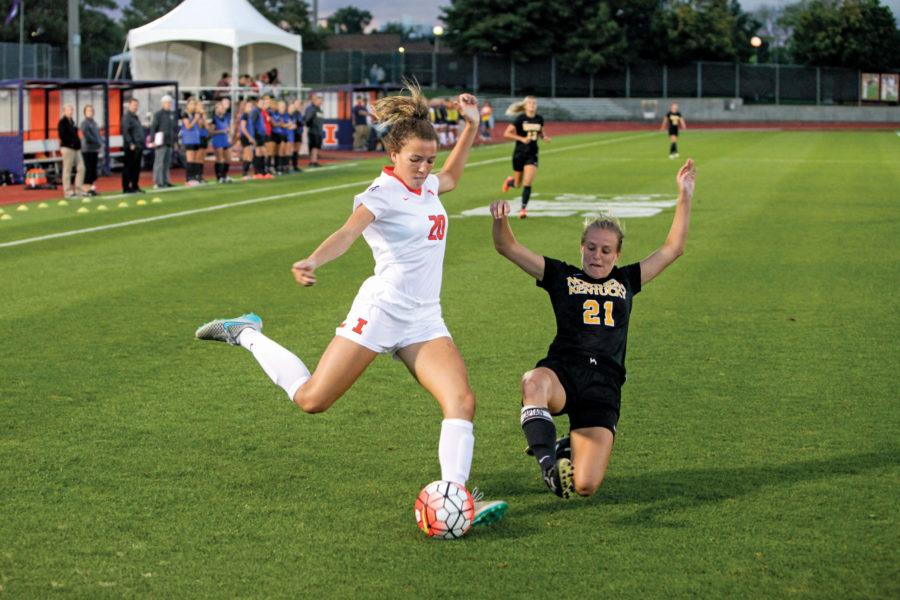 Illinois forward Kara Marbury shoots during the game against Northern Kentucky at Illinois Soccer Stadium on Friday. Mabury took seven shots against the Norse, playing a key role in the Illini’s offense.

The Illinois soccer team (6-1) looked physically outmatched against Northern Kentucky on Friday, but nevertheless handed the Norse (4-1) their first loss of the season at the Illinois Soccer Stadium.

Skill prevailed over size in the Illini victory, as the defense locked down its opponents while the offense came out firing.

The defensive backline didn’t allow a single shot from Northern Kentucky in the first half.

On the flip side, in the first period, the Illini rifled off 15 shots at Norse goalkeeper Brooke Schocker.

Illinois was only converted on one of those shots, however, getting on the board in the 36th minute off of a Hope D’Addario free kick from the far side. The free kick was a result of a NKU yellow card.

Despite the high number of shots — the Illini ended with a program record of 29 to NKU’s four. Head coach Janet Rayfield said she wished her team would shift the focus away from quantity to quality.

“I wish we would have been a bit more creative, so the quality of those opportunities had been better,” Rayfield said. “We certainly want to get more of those on frame.”

Rayfield said she was still pleased with her team’s ability to dominate time of possession in the attacking third, but did not like how the Illini took long-range shots, essentially bailing out the Norse.

She said she believes that was part of the game plan for Northern Kentucky.

“They defended well,” Rayfield said. “They allowed us to get the quantity, but they didn’t let us get the quality of shots that we wanted.”

Sophomore forward Kara Marbury played a key role in the Illini’s persistent offense — she took seven shots against the Norse — but gave all the credit to the defense for the win.

“Our defense is awesome,” Marbury said. “I think that’s definitely the strength of our team.”

Marbury added that her teammates are constantly working hard to get on the back line to prevent scoring chances from taking place for opponents, which helps explain why Illinois has 32 more shots attempts than its competitors on the season — the Illini have 103 shots and their opponents have 71 shots this fall.

Junior goalkeeper Claire Wheatley is appreciative of her defense’s stellar play thus far this season. She noted that her team identity to this point reflects a group that is always working hard and steps up in areas that need it. On Friday, she thought the defense stepped up.

“I think they did a fantastic job tonight, really covering each other and making sure nothing came through,” said Wheatley. “I was really proud of them for the communication and organization.”

The Illini have two matches next week in Indiana — Indiana University on Friday and Purdue on Sunday.

Rayfield, Marbury, Wheatley and the rest of the team said they hope that their recent success continues on the trip.