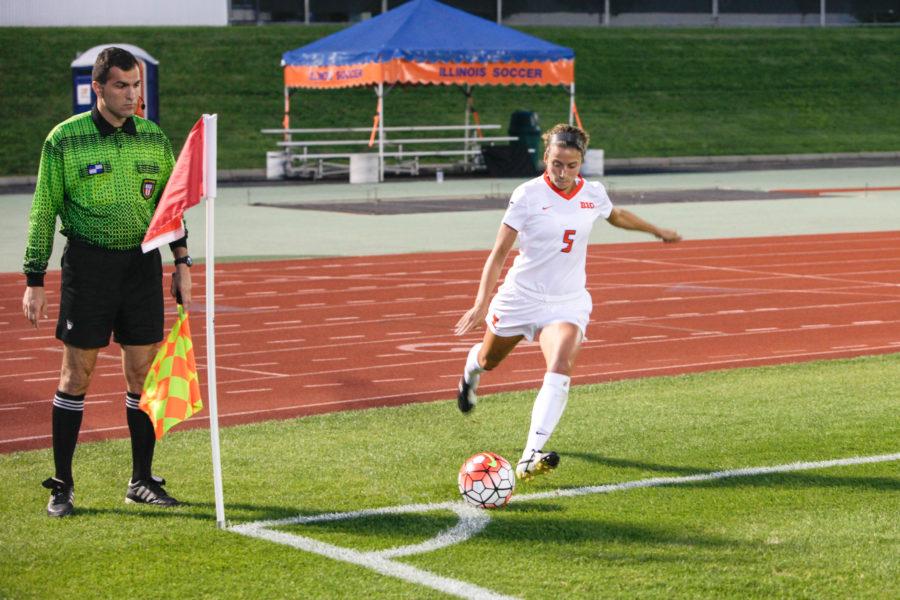 Illinois head coach Janet Rayfield and the Illini soccer team didn’t really know what to expect from Northern Kentucky before the two teams faced off Friday.

As a result – in terms of preparation – Illinois implemented a simple game plan.

The Illini wanted to see what the Norse would give them.

What Illinois got was plenty of space to get into the attacking third. The difficulty was what the team encountered in that space. Northern Kentucky stacked up near the box to ensure that the Illini could not get great looks.

Illinois players settled for a lot of off-target shots, 19 to be exact.

“I just would’ve liked to have seen us be a little more active, and create more quality chances as opposed to the quantity,” Rayfield said.

The shots certainly came for the Illini, but the team — as Rayfield alluded to — did not exactly convert on many opportunities.

Illinois scored one goal — in the 36th minute off of a Hope D’Addario free kick from the far side after a NKU yellow card — on a season-high 29 strikes.

“The quantity was there tonight, the quality just wasn’t,” Rayfield said.

Freshman midfielder Katie Murray has started for the Illini in the last two games and is making a good impression on Rayfield and the rest of the team.

Murray’s extensive playing time is coming in part because of injury — senior Reagan Robishaw hurt her knee last week and Rayfield speculated it was a torn ACL.

Rayfield said that Murray is a good fit to fill the role that Robishaw played for the Illini — a gritty, defensive/midfielder hybrid. According to Rayfield, Murray had a great performance on the West Coast against Portland, but struggled at times during the match against Northern Kentucky on Friday.

“She’s a freshman that is still learning the game,” said Rayfield. “We’re trying to find the spaces where we can get her the ball a little more often.”

Rayfield is looking for Murray to be a go-to in the future now that Robishaw is excepted to be out for an extended period of time. Murray’s youth will become less and less apparent as the freshman gets more starts for the Illini.

“I’m excited about what Katie brings to this program,” Rayfield said. “I think she’ll have performances that are better than tonight’s.”

Marbury back at full strength

Sophomore forward Kara Marbury sported an athletic wrap around her quad for the first six games of the season. She had been recovering from a strained quad, which hampered her quickness out on the field. Friday night’s Illini lineup against the Norse featured a different, more-healthy version of Marbury.

The forward said that she is back at full strength and ready to contribute at a higher level.

“I feel like my runs were more on,” Marbury said. “I wasn’t trying to not run as fast as I can because I didn’t want to re-pull it.”

Rayfield certainly appreciates having Marbury at 100 percent health. The sophomore is tied for second on Illinois’ goal-scoring list and sits alone in second in shots. The Illini coach applauded Marbury’s effort on both ends of the field.

“Marbury is as much of a defensive presence for us as (key defender) Hope D’Addario,” Rayfield said.

D’Addario has started every game this season and leads the team in minutes played. Marbury has started in six of the seven games.